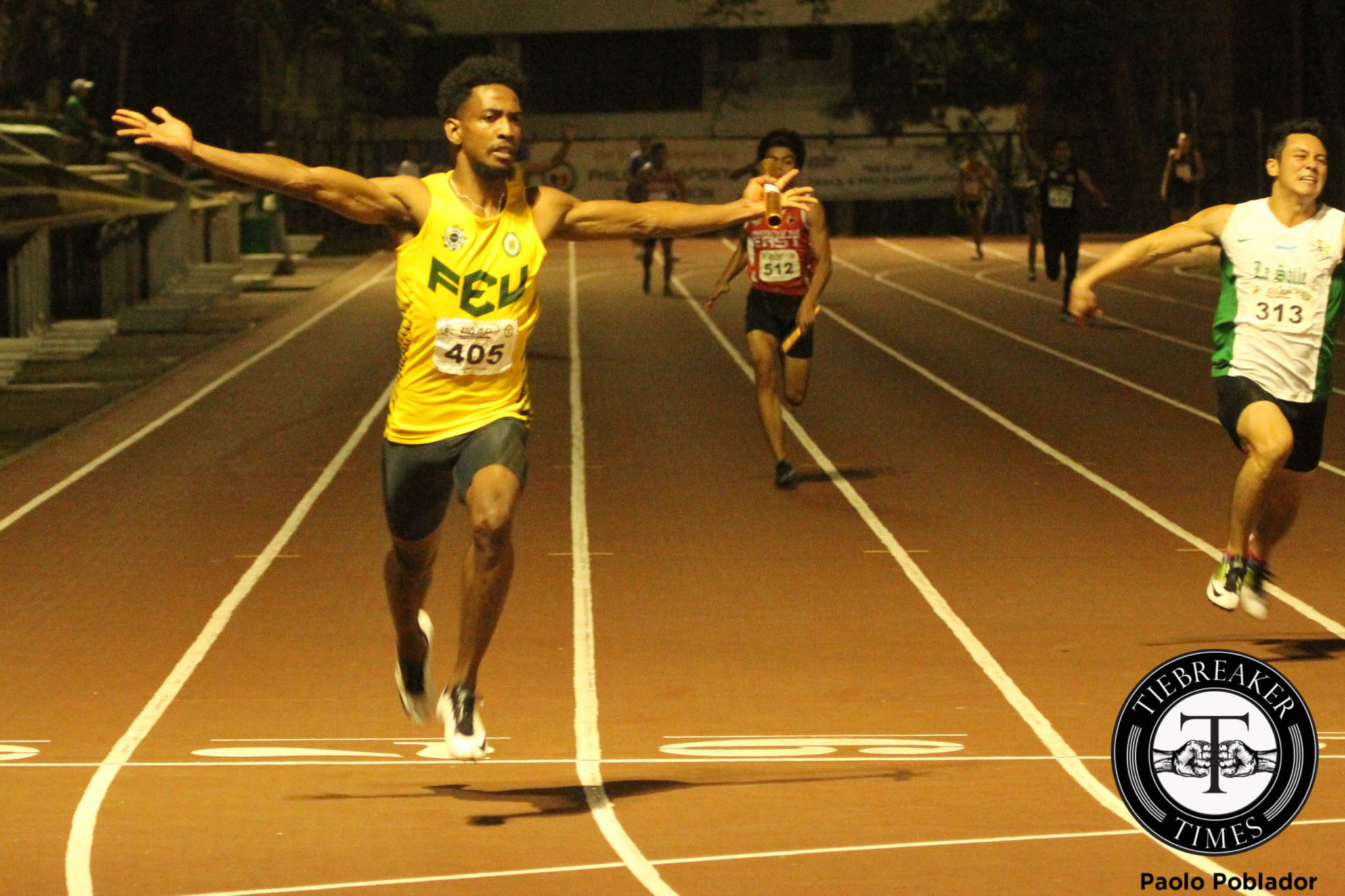 The Far Eastern University (FEU) continue to assert their dominance in the field after winning medals and scoring points in the past two days of the competition. Thus far they have succeeded in putting their athletes in top eight spots in most events. The University of Santo Tomas (UST) trail behind them, having consistently scored in most events. Both the University of the Philippines (UP) and De La Salle University (DLSU), however, continue to exchange blows in the power events to maintain that third place spot.

Day three is pivotal, as this will see who gains good momentum and motivation to push through into the final two days. The hunt is on.

The first track event for the men’s division was the 400m dash. All three medalists from last year were present for the event.

Defending champion Gabriel Soriano from UP came out a bit slow in the heats with 50.50 seconds for fourth place in the qualifiers. Coming off strong was last year’s silver medalist Clinton Bautista from FEU, who managed to clock the first of two sub-50 second qualifying time of the afternoon with 49.55 seconds. Last year’s bronze medalist Michael Del Prado trailed Bautista with the second sub-50 second qualifying time of the day with 49.56.

The variance of the qualifying times was small so the fight for gold was still an open battle in the field.

In the finals however, it was evident that the medalists from last year would not back down without a fight. Bautista, Soriano, and Del Prado came out strong, with neither men fading coming into the last 150 meters of the race. Defending champion Soriano was fading coming into the homestretch, which gave Bautista and Del Prado the signal to step into overdrive. For a moment Bautista had the chance, but young gun Del Prado surprisingly had some more gas left in the tank to pull away with a gold medal time of 48.71 seconds, over a second faster than last season’s gold medal time. Bautista had to settle for silver with 49.69 seconds, while Soriano had to end his last season with 50.31 seconds for bronze.

Moving on to the 3000m steeplechase as a precursor to the final event of the night, defending champion John Moreno of DLSU only managed to clock 9:37 this year to fall into second place. Coming off from his loss in the 10000m run and his bronze medal finish in this event last year was FEU’s Jomar Angus with a time of 9:34, over a second faster than Moreno’s time from last year. FEU’s Philip Gongob who only managed to place sixth last year, improved on his time by over 30 seconds to clinch the bronze medal with 9:38.

After the distance events cleared, the oval was now set for the 4x100m relay, the final event of the day. Seeded to battle for gold were FEU with their strong line-up of Jerwen Ebcas, William Galceran, Ian Delos Santos, and Clinton Bautista. The target was on their back as UP, UST, DLSU, and ADMU all had strong and formidable line-ups.

From gun-start up until the 200m mark, the race was packed, with no clear winner. However, FEU’s clean passing paved way for Delos Santos to give Bautista a clear shot to sprint to the finish to again bring the gold home for their team. FEU won the gold with a time of 42.50 seconds, over half a second faster than the rest of the field.

Coming in second were UP’s Alvin Andresio, Jaime Mejia, Gabriel Soriano, and Melvin Sangalang who showed clean and near-perfect passing throughout the entire race. They finished with 42.94 seconds, edging out UST’s Gerard Morales, Jay Nieles, Dustine Devera, and Romnick Nor, who settled for a 42.94-second third place finish.

Defending champion Kenny Gonzales of FEU was set to defend his title this year and target the long-standing UAAP record of 60.66m. The record was impressively set by Javier Gomez from UP during the decathlon and not during the individual javelin event. FEU had to step up a bit this year with the absence of Janry Ubas if they wanted to continue to dominate the point tally.

From the warm up throws to the last throw of the afternoon, Gonzales showed clear dominance. His final record of 60.55 meters was just a mere 0.11 meters short of the record. It was still worthy of celebration as FEU took gold and silver, with compatriot Rejohn Gadian throwing 55.38 meters. UAAP high school champion Joshua Patalud had to settle for bronze with 54.96 meters.

These were the only men who threw more than 50 meters, as fourth place finisher Jeriel Apelar only managed to throw 49.55 meters. Even Apelar’s throw in the decathlon javelin of 50 meters wouldn’t have been enough to secure the bronze place.

After Neil Borres’ ankle sprain from his unfortunate accident in his last attempt in the long jump, the field was now clear for other competitors to grab that gold medal. Stepping up was rookie Kirk Bacas from FEU with a gold medal jump of 14.17 meters. Fresh off from the previous day’s decathlon, teammate Ian Delos Santos settled for silver with 14.13 meters to give FEU another gold-silver finish for the day, solidifying their lead for the overall championship in the men’s division. Taking home the bronze for the afternoon was UST’s Mark Matiling with 14.12 meters, beating DLSU’s football star Gerald Layumas by over 0.10 meters.