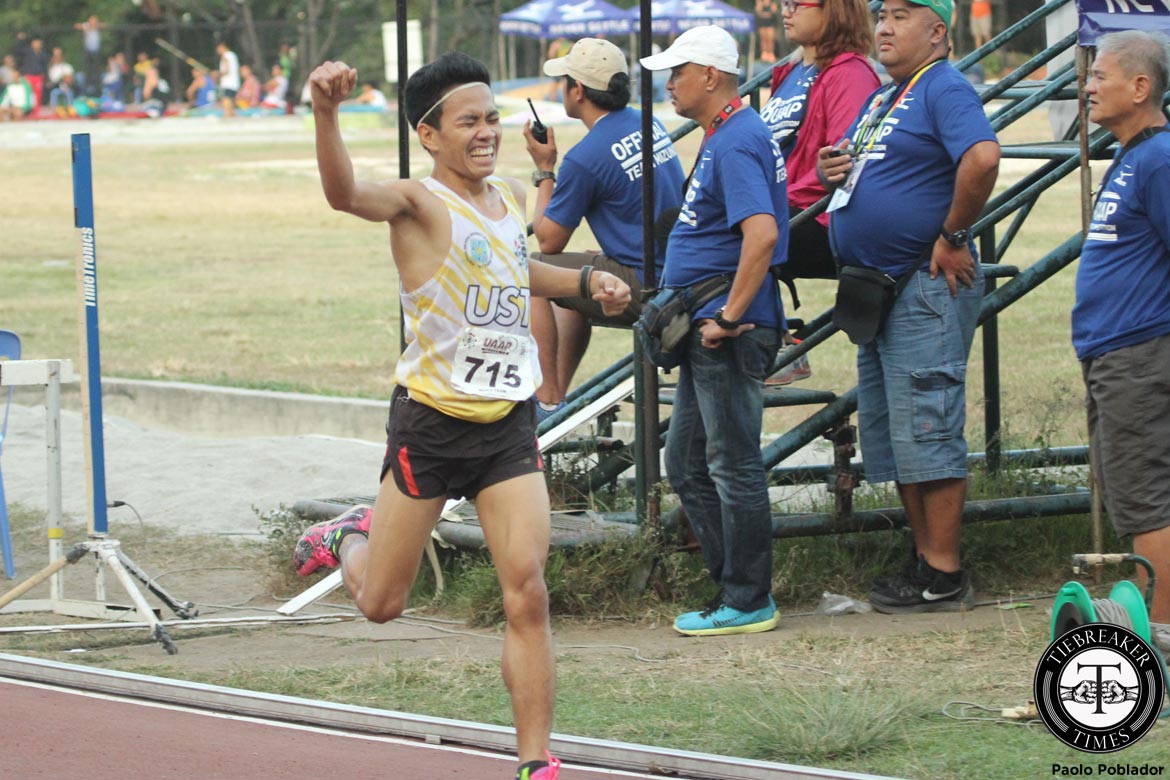 Day two of the championships showcased the second-half of the men’s decathlon thriller. It was also the showdown for the 200m dash, where five favorites were seeded for the gold medal. The Far Eastern University (FEU) were still atop the podium after a strong showing in the first day. The University of Santo Tomas (UST), University of the Philippines (UP), De La Salle University (DLSU), and Ateneo de Manila University (ADMU) are all right behind FEU, fighting for the second and third spots in the final points tally.

Five people were seeded to qualify and fight for gold in the men’s 200m. Defending champion Clinton Bautista from FEU sought to defend his title and win another back-to-back, just as in the 100m. Last year’s silver medalist Gabriel Soriano from UP, and bronze medalist Mark Garcia from the University of the East (UE), were also seeded to again battle it out. Another competitor also on the hunt for the gold medal spot was DLSU’s Michael Del Prado, the son of the 400m national record holder Isidro Del Prado Sr.

In the heats, the second generation sprinter Del Prado obliterated the track with a 22.19-second 200m to rank first in the qualifiers. Coming up after him was Bautista with 22.37 seconds. Compatriot William Galceran trailed Bautista for third with 22.39 seconds. 100m silver medalist Romnick Nor from UST had to step up a bit, as he had no other top sprinters to push him in his heat. However, Nor still managed to register a fast time qualifying with 22.41 seconds. Soriano, on the other hand, only managed to clock 22.60 seconds in the qualifying round, placing him in sixth place. An even bigger surprise was Garcia, who managed to squeeze into the qualifiers with a time of 22.69 seconds, placing him eighth in the qualifiers.

From the start, it seemed that Bautista was going to run away with the gold medal again. However, prior to the 200m fianls, Bautista also competed in the men’s long jump. The fatigue from the explosive plyometric movements needed in the long jump was evident in the last 50m of the 200m, as Bautista started slowing down. Del Prado and Nor capitalized on this, with the latter getting the upper hand. Nor crossed the finished line with a time of 22.31 seconds to win the gold medal. Del Prado also crossed the line at 22.31 seconds, but the photo finish and post-race timing review by the officials saw Nor win by a small margin. Despite the fatigue, Bautista still managed to take home the bronze with 22.59 seconds.

The other two track events for the men’s division for the day was the 10000m run and the 10000m racewalk.

In the 10000m run, FEU’s Jomar Angus was seeded to defend his 10000m title. However, Angus only managed to finish eighth this season with a time of 34:30.92, almost a minute slower than his gold medal time last year. UST’s Gregg Osorio then took advantage of the weakened defending champion and ran away with the gold with an impressive 33:14.21, over 40 seconds faster than Angus’ time last year. UE’s Reynold Villafranca would settle for silver after trailing Osorio by just over 0.60 seconds. Coming in at third was FEU’s Evelou Abutas with 33:19.04.

The absence of UST’s Lambert Padua from last year’s competition had his teammate Dave Gumacal win the gold for their team. This year however, Padua came back with a vengeance when he clocked 50:44.77, obliterating last year’s gold medal time by over five minutes. Padua’s performance impressive performance had him even overlap the silver medal winner Edwin Verdera of UE, who clocked 51:29.45. Padua’s compatriot John Lamaclamac set another victory for UST, clocking 51:49.76. Coming in at fourth was UP’s Jeremiah Angan with a time of 55:56.04. Angan’s time would have won him silver in the last season of the competition.

With FEU’s Janry Ubas not competing this year, Gerald Layumas of DLSU was now set up to win the gold. However, UST’s top jumper Neil Borres took the leap of the lifetime at 6.98 meters. This landed him first place after his second jump. Sadly however, during his third attempt, he had a bad foot plant and ended up spraining his ankle. Borres was supposed to target Ubas’ UAAP record from last year of 7.29 meters.

FEU’s Kirk Bacas took silver after jumping 6.86 meters. After battling it out in the decathlon, ADMU’s Joseph Capinpin and FEU’s Ian Delos Santos also took their rivalry to the long jump. Capinpin bested Delos Santos in the event by just 0.01 meters, jumping 6.67 meters, with Delos Santos only managing to jump 6.66 meters. 100m gold medalist Bautista also competed in this event and landed in fifth with a jump of 6.64 meters. During the long jump competition, Bautista switched gears to also compete in the 200m.

In the continuation of the men’s decathlon, FEU’s Ian Delos Santos came in as the overnight leader. The 110m hurdles was his race as he ran away with 15.72 seconds, over 0.3 seconds away from second place finisher Henry Gonzales from ADMU. Capinpin, who trailed behind Delos Santos, clocked 16.25 seconds.

The discus throw faced horrible weather conditions such as light rain and headwinds. The farthest throw of the afternoon came from FEU’s Columnas Cecilio at 27.96 meters. ADMU’s Gabriel Vera Cruz threw the second farthest of that event with 26.72m, placing him fifth place in the decathlon. Delos Santos was still ahead of Capinpin with a total aggregate score of 4432 points after throwing 25.19 meters. Capinpin threw 25.67 meters to maintain second place overall in the decathlon with 4377 points, but the gap between him and Delos Santos was growing.

Come the pole vault, all eyes were on Delos Santos and Capinpin. Both of them had a draw in this event as both decathletes only managed to clear 3.20m. Fortunately for Capinpin, this maintained the gap.

Horror struck in the javelin throw as Capinpin only managed to throw 34.23 meters, placing him in third place, behind FEU’s Kenny Gonzales, who managed to throw a massive 58.77 meters. Delos Santos made sure his lead was secured when he threw 41.97 meters.