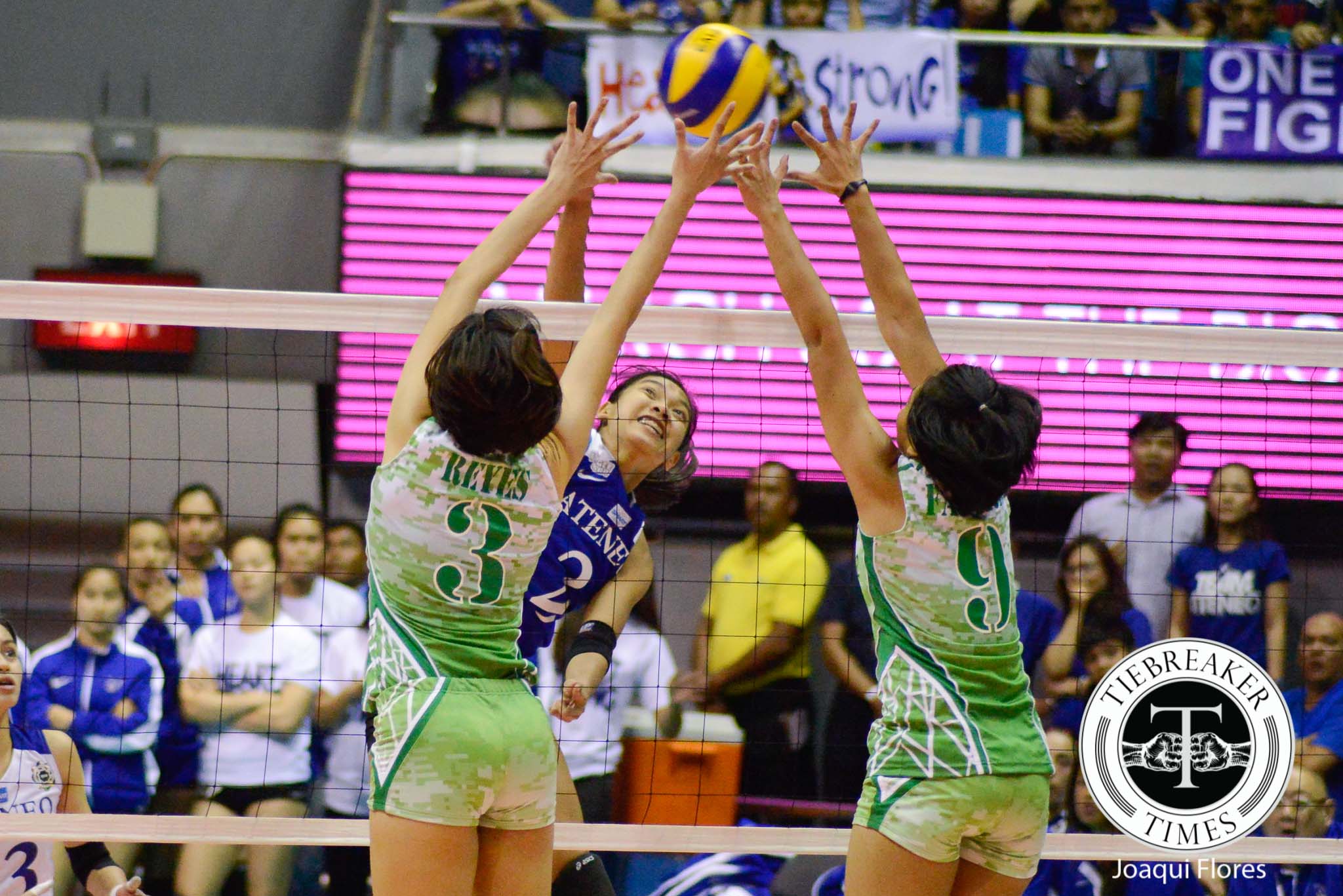 Last Wednesday, the Ateneo de Manila Lady Eagles saw their winning streak hit 24 after a masterful straight-sets ambush against the University of the East Lady Warriors, 25-12, 25-10, 25-10 at the Filoil Flying V Centre.

Not seeing the need to exert star skipper Alyssa Valdez much, Ateneo saw multiple contributions from their other players, as Jho Maraguinot led the Lady Eagles with 12 points and 1 kill block while Bea De Leon had 8 points and 3 kill blocks.

Now, it will be a big test for the back-to-back defending champions, as they are set to have their much anticipated Finals rematch against the De La Salle University Lady Spikers this coming Saturday, 4:30 pm at the Smart Araneta Coliseum.

But before we get into the action of last year’s championship rematch, let us take a trip down memory lane. Before Ateneo had amassed their current winning streak, the last time they dropped a UAAP game was March 8, 2014. Coincidentally, it was also against DLSU during the second game of the Season 76 Women’s Volleyball Finals held at the Smart Araneta Coliseum.

In that game, Ateneo came up short against DLSU in four sets, 14-25, 20-25, 25-19, 24-26. In that losing effort, Alyssa Valdez led the Lady Eagles with 15 points and 5 excellent digs while Amy Ahomiro followed up with 9 points and 4 kill blocks. In addition, Jia Morado, Marge Tejada, and Kim Gequillana chipped in 5 points each.

On the other hand, Ara Galang led La Salle with 17 points and 9 excellent digs, while Mika Reyes chalked up 14 points and 1 kill block. In addition, team captain Aby Marano cashed in 11 points and 3 kill blocks.

Coming off a defeat from the opening game of the championship series, La Salle were eager to get back in the second game. Playing with a sense of urgency, the Lady Spikers immediately took an 8-6 lead and firmly established their momentum. However, Ateneo countered back and trimmed the DLSU lead to 12-11.

Then, Ateneo libero Denden Lazaro sprained her ankle while chasing a loose ball heading into the stands. With that break of the game, La Salle were able to produce an 8-2 rally to get the first set.

With the momentum shifting to the ladies from Taft Avenue, La Salle hammered Ateneo with a series of power spikes which lead to 17-10 advantage. Ateneo tried to even things up, trimming the lead to 22-18, but La Salle were able to pull the necessary stops to run away in the second set.

After winning the third set, the Lady Eagles then threatened to steal another set from the Lady Spikers to force a fifth set. However, Ateneo’s momentum was short lived as Marano pumped up the team by unleashing her signature cross-court kills that ignited a 5-1 La Salle run. Ateneo were able to keep things within striking distance and forced a deuce to tie things up at 24-all. But a Valdez service error and another faulty reception from Ateneo eventually gave the match to La Salle.

Going back to present time, only two questions are raised prior to another gigantic Ateneo-La Salle game. Will Ateneo extend their winning streak further this Saturday? Or will La Salle finally exorcise their demons?

Offensive improvement a must for Coach Let, Lady Tamaraws