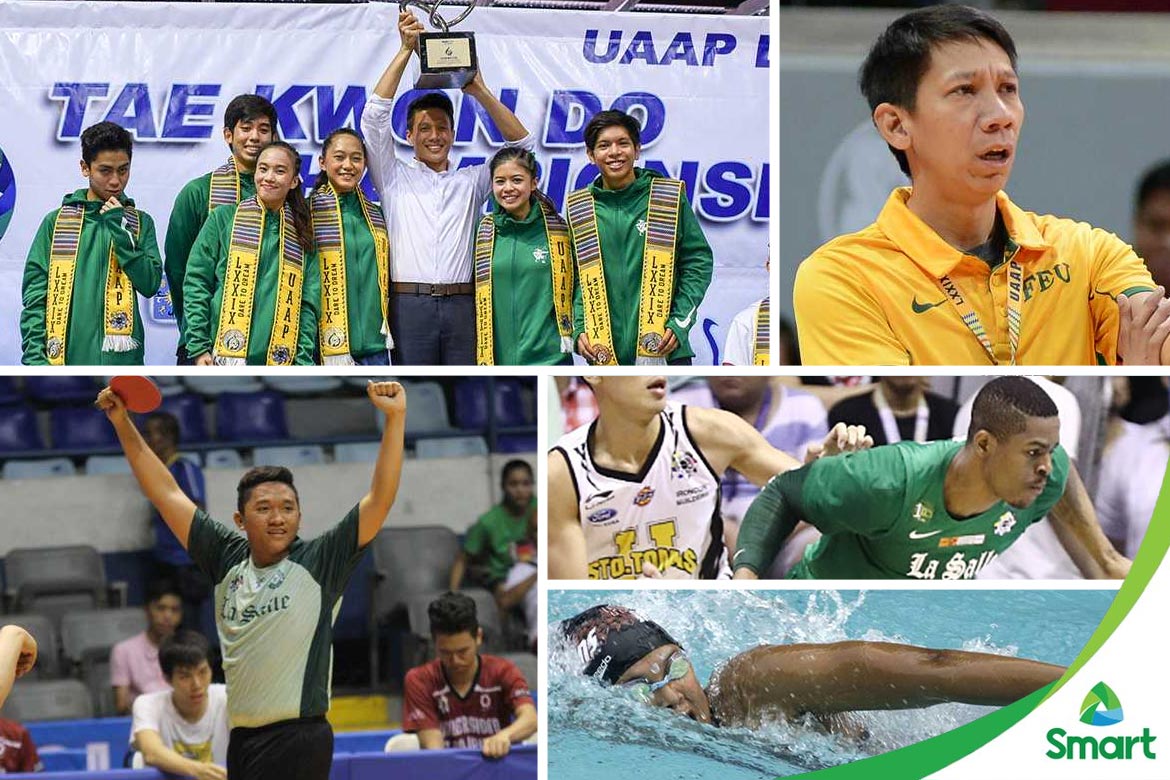 It was a dominant week for the De La Salle University squads. The Green Archers unleashed mayhem on the UST Growling Tigers anew to formalize their entry into the Final Four with a twice-to-beat edge, the Green Jins won their first-ever Poomsae crown, while the Green Paddlers demolished the stepladder to enter the Finals.

A champion coach is set to move to the pro ranks while the Battle of Katipunan heated up at the Rizal Memorial Complex.

With National Team mainstay JP Sabido as their mentor, the jins from Taft Avenue have been perennial contenders in the Poomsae championship.

“Four long years! Finally we made it,” Sabido said.

With just six members in the team – the minimum number of entrants for a squad, Sabido believes that the small group made it both easier and harder for them to win this year.

“If I were to describe it, we are more united this time because we are just a small group. We are only six players,” he added.

Rinna Babanto won gold in the women’s individual category while bagging silver in the team category with Angelica Gaw and skipper Kristi Hernandez. Gaw and Raphael Mella took home La Salle’s other gold in the mixed pair category. Mella, Mcavyngyr Alob, and Benjamin Sembrano won silver as well while Alob picked up bronze in the men’s individual event. Their 2-2-1 haul was enough to propel them to a golden finish.

FEU’s Racela set to move to the pros

The promotion, which has been speculated for weeks, has yet to be confirmed but reports from various outlets have all but affirmed the move.

According to FEU Athletics Director Mark Molina, the top priority of Racela right now is the Tamaraws’ UAAP Season 79 campaign.

“Wala namang doubt. I know Nash won’t leave the team at the middle of the season. Our main concern right now is Season 79,” he said

Moreover, Molina added that whatever Racela’s decision may be after the season, they are looking at ways to give Racela a role with the organization.

“If Nash gets the TNT position, we will do everything in our power to keep Nash in the FEU organization, in whatever capacity which he can help us. ‘Yan ang sigurado. of course, pending the blessing from TNT and Nash himself.”

Assistant coach Josh Reyes is expected to take over the mantle as the Tamaraws’ head coach after this season.

Ever since the stepladder format was implemented whenever a team sweeps the elimination round, the UAAP has seen thrice-to-beat advantages crumble. But never has the league seen a team come from sixth place barge into the finals.

Defending Men’s Table Tennis champions De La Salle University Green Paddlers, in their quest to defend their crown, did not buckled under pressure as they eliminated four teams to head into the finals.

In the semifinals, La Salle’s Super Six needed to overcome the NU Bulldogs’ twice-to-beat edge. They were able to do so, taking both ties 3-2 to move on to the finals.

The defending UAAP champions will face the UST Tiger Paddlers in the Finals on Wednesday, October 26. Ties are scheduled at 9am, 1pm, and, if necessary, 3pm.

The Green Archers upstaged their 38-point blowout of the Growling Tigers in the first round by lambasting the season-hosts anew in record-breaking fashion.

The De La Salle University Green Archers tallied another rout of the University of Santo Tomas Growling Tigers, 99-56, to clinch the twice-to-beat advantage in the next round, Sunday afternoon.

It was the first 40-point win in the UAAP since August 13, 2011, when the National University trounced the University of the East, 91-51.

The season-hosts shot just 27 percent from the field compared to a superior 46 percent for the league-leaders. Moreover, La Salle bullied UST on the board, out-rebounding them 66 to 35.

Controversy arose though both during and after the game.

With the Green Archers up 78-40 with 7:06 left, first year La Salle head coach Aldin Ayo decided to plug in a line-up consisting of Cameroonian student-athlete Ben Mbala, Filipino-Americans Julian Sargent, Jason Perkins, and Abu Tratter, and Pampanga-native Mark Dyke that drew cheers from the La Salle faithful and jeers from the rest of the crowd in attendance.

Some pundits and fans alike saw it as Ayo experimenting with his line-up but according to lead assistant coach Louie Gonzalez, that is not the case.

It did not stop there.

After the game, first year UST head coach Boy Sablan lambasted the officials of the said game as he alleged that two La Salle errors were blatantly not called by the referees.

And with those allegations, he is ready to face the repercussions that will be handed to him by the league.

Battle of Katipunan heats up in Women’s Swimming

The Ateneo Lady Eagles and the UP Lady Maroons are in the thick of their nine-year rivalry where Ateneo has a total of three championships (Season 71, 77 & 78) against UP’s five straight (Season 72-76).

Entering the final day of the Women’s Swimming championships, the lady tankers of Ateneo are just ahead by a slim 10 points from their UP counterparts, 332-322.

“We know that they will catch up. We will try hang on to the lead. But in terms of times, the girls improved and we’re happy about it,” Ateneo Swimming program director Archimedes Lim said about the goal of taking the three-peat.

“The girls have been really working hard in their swims. They’re coming up with good times and breaking records,” UP’s Swimming program director Noel Rivera said. “We’re good with our swims, there weren’t any disqualifications. So we’re hoping to catch up.” 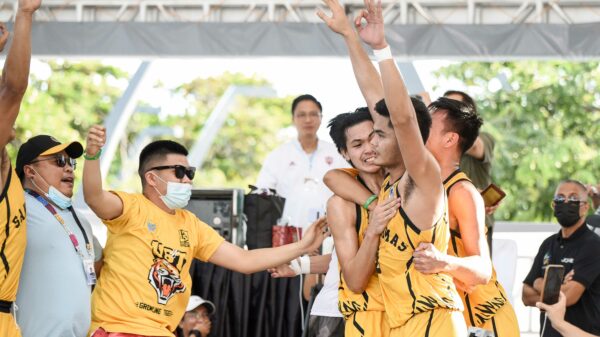