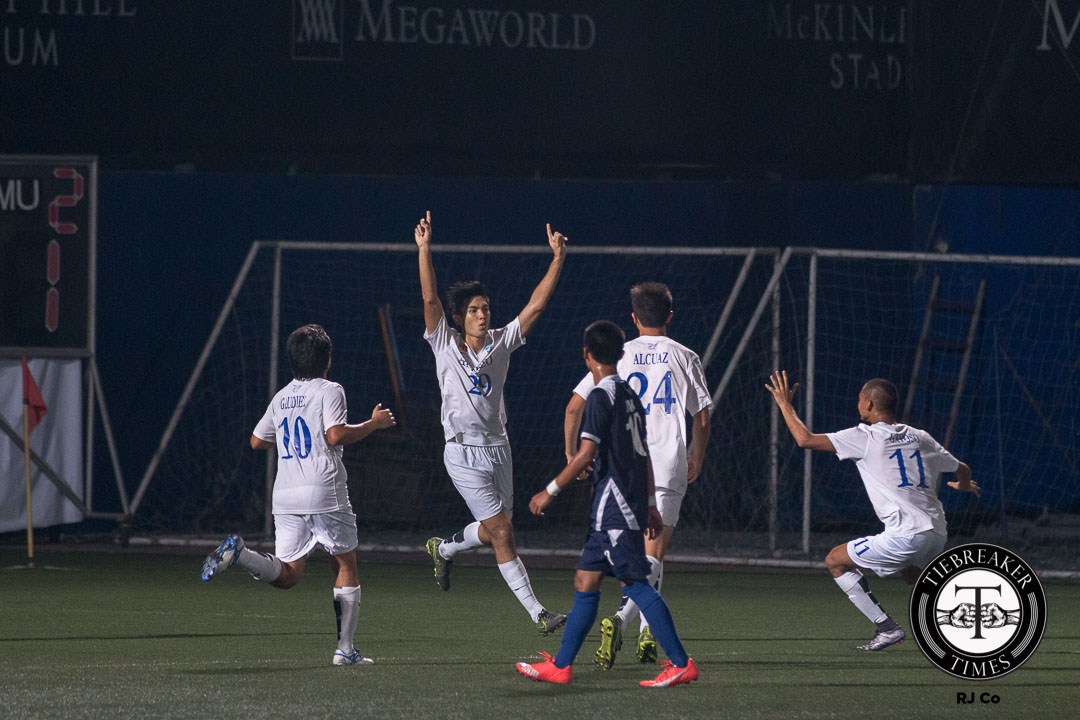 Adamson and Ateneo both had multiple attempts in the first half. Falcon Bless Brian II Jumo and Blue Eagle Carlo Liay had chances early in the game but the two players failed to score. Xavier Alcuaz then had a header narrowly miss the Adamson goal. Jackson Ramos had a chance to score for Adamson but his header forced a good save from Ateneo goalkeeper Kenneth James.

Ateneo rookie Gayoso was lively once again for the Blue Eagles, with one shot from outside the Adamson box that went well wide. Gayoso, later, was through on goal because of a clever combination play, but Adamson goalkeeper Carl Viray successfully thwarted him. At the other end, Jusuel Pilarca tested Viray but the latter came out on top.

The Soaring Falcons won a free kick at the left side of the Ateneo penalty box. Bryce Rabino stepped up for Adamson but his free kick didn’t even test James. The Ateneo keeper then had to make another save, this time from Philip Bardaje, whose shot would’ve definitely given Adamson the lead.

Alcuaz had a chance to put Ateneo ahead before halftime but his header was cleared. Both teams were goalless at the break.

Masyu Yoshioka showed Ateneo’s determination to get that important goal when his header made Viray work at the start of the second half. The Blue Eagles finally broke the deadlock when Mabanag scored at the 48th minute from the right side of the Adamson penalty box.

Rabino tried to respond for Adamson a few minutes later, but his free kick was easily caught by James. Adamson were awarded another free kick and Jackson Ramos attempted to score once again, but James was in control.

However, Ateneo smelled blood and it seemed only a matter of time before the Blue Eagles doubled their advantage. Rocha capitalized on a set-piece to deliver a two-goal cushion for the Blue Eagles at the 55th minute.

Gayoso tried to get on the goals but his chip from outside the box went over the Adamson goal. He then had a shot that narrowly failed to hit the target. The Blue Eagles later had multiple attempts on the Adamson goal, but the Soaring Falcons successfully pulled off two consecutive goal line clearances.

A defensive scramble ensued in the Blue Eagles’ penalty box, but the Soaring Falcons failed to capitalize.

No player deserved to have a goal credited to his name more than Gayoso. Hewas inches close when his shot late in the game painfully hit the crossbar. He was finally rewarded for his efforts at the 85th minute, with Viray powerless to stop the shot.

Yoshioka gave Ateneo a fourth goal in stoppage time when he tapped the ball in from inside the Adamson box. In the end, Ateneo simply outclassed Adamson 4-0.

Merida made adjustments to the game. Goalkeeper JP Oracion was rested, while Rocha and Alcuaz started together as center-backs. All three are expected to start versus the University of the Philippines. In addition to that, it’s only as of press time that Yoshioka is recovering from an ankle injury.

For Ateneo’s next opponents, Merida called it the Battle of Katipunan. “Parang walang gustong matalo.”

The next game for Ateneo is against UP (1:00PM). On the other hand, Adamson face the University of the East (3:00PM). Both games will be held at the Moro Lorenzo Field in Ateneo on February 25, 2016 (Thursday).