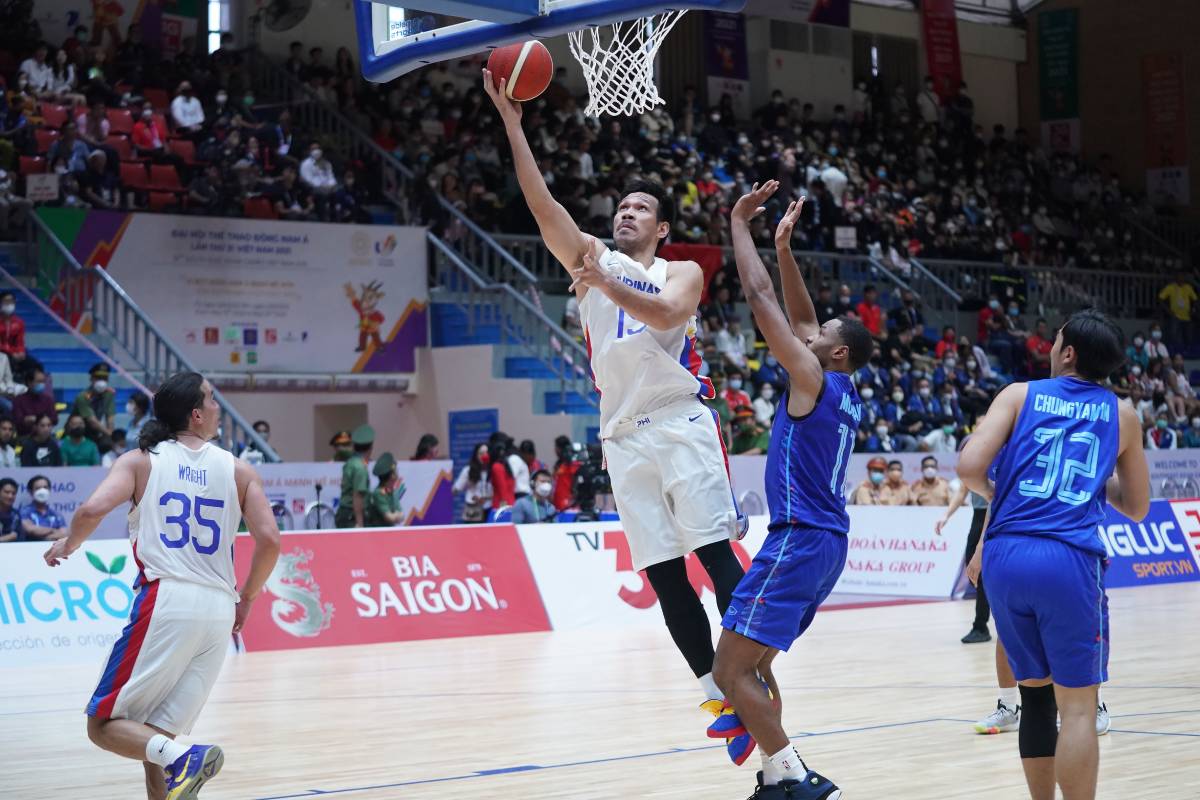 Gilas Pilipinas averted disaster with a 76-73 escape act against Thailand to start its title defense bid on a winning note in the 31st Southeast Asian Games men’s basketball tilt, Monday night at the Thanh Tri Gymnasium in Hanoi, Vietnam.

The reigning gold medalists weren’t able to ice the game with 6.7 seconds left. Kiefer Ravena made just one of his two free throws, but dodged a bullet when Nakorn Jaisanuk missed a potential game-tying trey as time expired.

The thrilling win saved the efforts of June Mar Fajardo, who powered the Filipino cagers with 28 points and 12 rebounds. He made a remarkable return to the international arena since the 2019 edition of the regional meet in Manila.

Fajardo joined hands with Thirdy Ravena in turning the game around in the second quarter. There, they led a 19-5 assault to wipe out a 10-point deficit and make it a 34-30 lead with less than three minutes left in the period.

The Philippines stayed in control from then on and even led by as many as 10, 73-63, following Fajardo’s three-point play with 3:15 to play.

But the Thais didn’t concede. Jaisanuk and Antonio Price conspired to bring their side within just a field goal, 73-75, with 13 seconds left.

That, though, proved to be their last gasp. They were not able to capitalize on Gilas’ missed opportunity to seal it from the line. Jaisanuk failed to sustain his hot streak from downtown as his triple from the wing missed.

The younger Ravena finished with 17 points and six rebounds, as all nine players fielded by coach Chot Reyes scored at least two in the victory.

#ReadMore  Jomary Torres frustrated but not defeated after ONE: Fire and Fury

Gilas will only have less than 24 hours to recover before facing Cambodia on Tuesday, May 18, at 6:00 PM (Manila time).

Price finished with 18 points to lead Thailand, who could’ve earned such a sweet payback for that heartbreaker it suffered in the 2019 finale had they managed to complete the massive upset of the ASEAN powerhouse.

Previously, the Thais got blown out by the PBA-backed Philippine team, 115-81, in the gold medal game at the Mall of Asia Arena. And Fajardo, coincidentally, was at the forefront of Gilas with 17 and 13.

Moses Morgan made 15 points. Nattakarn Muangboon had 12 points, while Freddie Lish chipped in 10 markers in a losing effort.