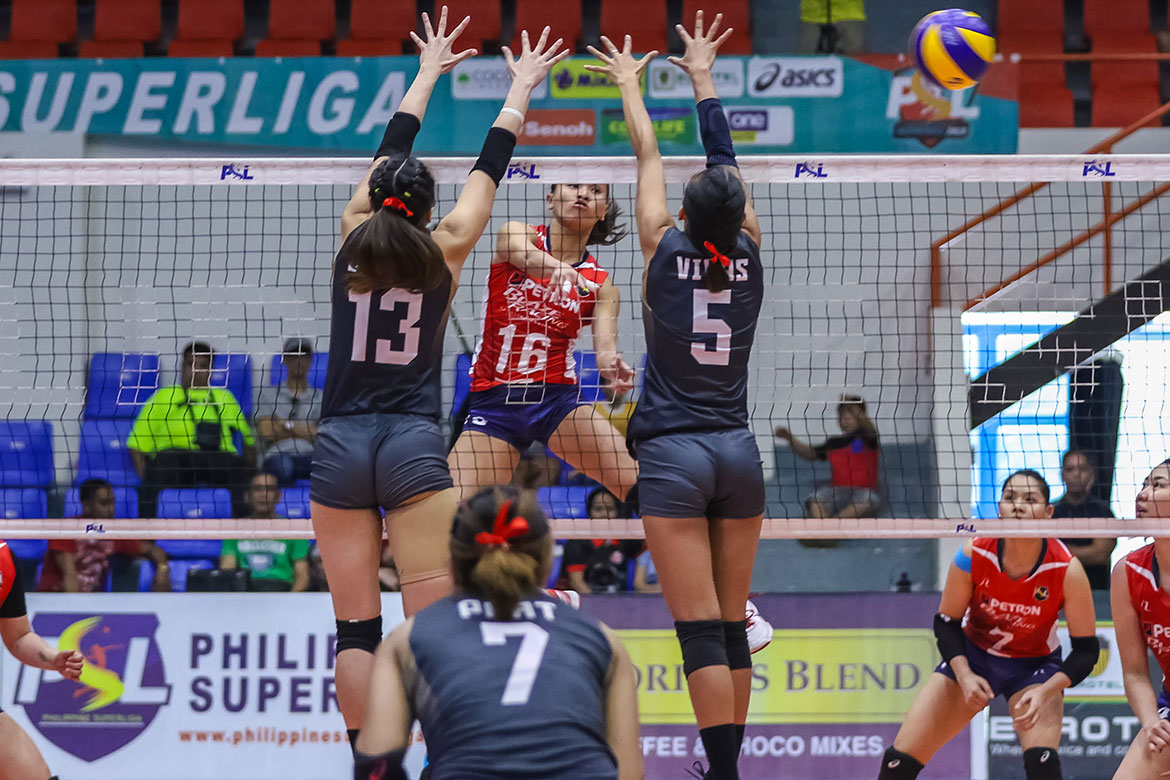 In a colossal clash between the two undefeated teams in the 2019 PSL Invitational Cup, Sisi Rondina had to turn in her conference-best performance for Petron to remain unscathed, Saturday.

The 5-foot-6 product of UST detonated 33 points built on 29 attacks and four service aces, including the crucial blows in the final chapter of a cardiac affair.

Down by three late in the decisive fifth frame, 10-13, Rondina nailed the differential hits that dragged Petron back and strangled Cignal in a 13-all knot. A trade of botched service attempts then followed for another stalemate at 14. Errors further spelled the difference, as Rachel Daquis and Alohi Robins-Hardy coughed up consecutive miscues that sealed Cignal’s fate.

With the morale-boosting win, the Blaze Spikers remain perched atop the Pool C standing with an immaculate 5-0 card, while shoving Cignal down to second seed with a 5-1 slate. Moreover, Petron has finally gained a measure of revenge against the team that dethroned them in the All-Filipino Conference.

Petron setter Angelica Legacion dished out 19 excellent sets for the Blaze Spikers, who welcomed the return of Rhea Dimaculangan.

While the Blaze Spikers had to muster a squeaker in the fifth stanza, they were actually on the doorstep of victory in the decisive fourth frame, holding on a commanding 24-17 advantage.

Though mired in deep waters, the HD Spikers remained calm and composed. They surged ahead through the steady service performance of Robins-Hardy to knock to within a solitary point at 23-24. Paat hammered then down a kill that forged a deuce.

Rondina finally stopped the bleeding for Petron with a piercing hit, but Paat responded with a blistering attack of her own for another stalemate, 25-all. The former tried to answer right back, but she misfired. Jovelyn Gonzaga then completed Cignal’s 10-1 comeback to bring the match to a rubber set.

Paat topped Cignal with 20 points, while Daquis and Gonzaga managed 16 and 10 markers, respectively. Gonzaga also tallied 21 excellent digs to post a double-double in a losing cause.

Meanwhile, Cignal setter Robins-Hardy fanned out 20 excellent sets on top of nine points that went down the drain, as the HD Spikers closed their preliminaries on a sour note.

The Blaze Spikers will seek to keep their record pristine and end their elimination round campaign on a high note against the PLDT Home Fibr Power Hitters on Sunday, October 13, at the FilOil Flying V Centre.