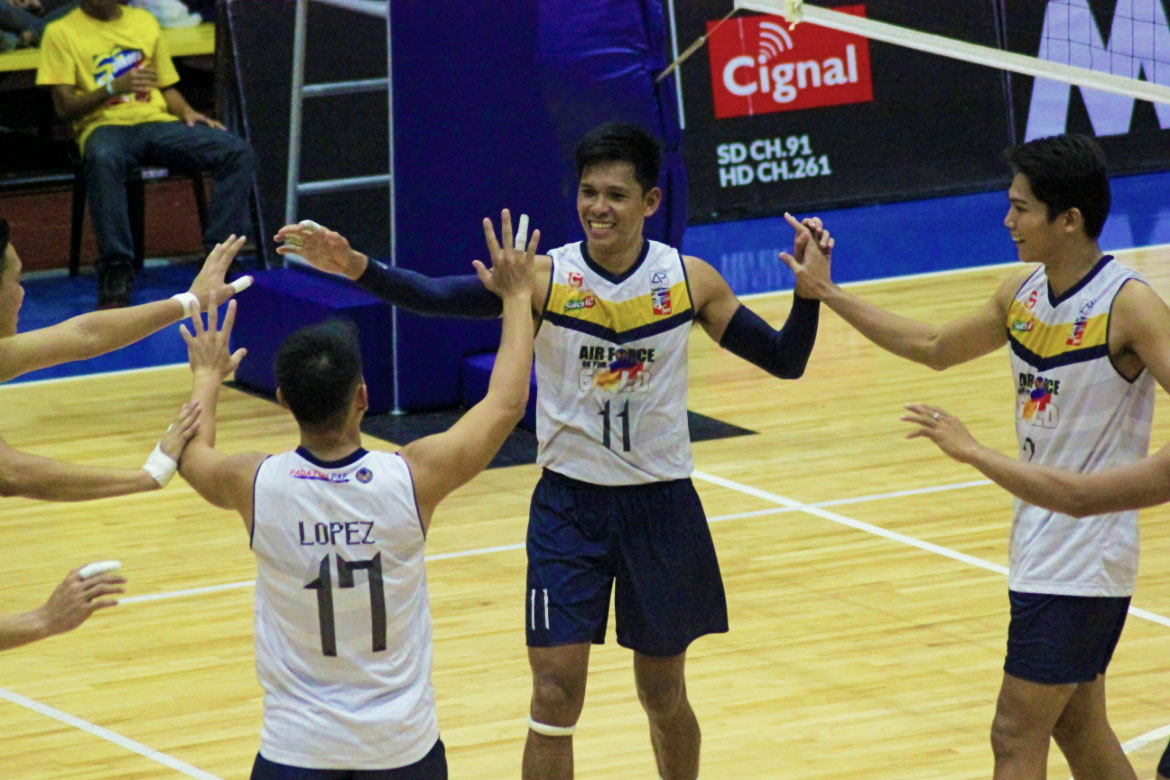 The one-two punch of Air Force posted huge numbers for the Jet Spikers with Abdilla firing 25 points, to go along with 15 excellent receptions, while Bryan Bagunas added 23 markers.

Up by a point, 5-4 in the fifth set, Abdilla stepped-up big for Air Force, scoring three points on a 4-0 run en route to a 9-4 lead. The Power Hitters fought back and were able to close the gap by one point after a kill from Pao Pablico and an attack error from Madz Gampong, 12-13.

Jessie Lopez glued things together for the Jet Spikers with 27 excellent sets while tallying three points.

Despite coming out with a win, the Jet Spikers’ went through a tough time fending off the pesky Power Hitters in the previous sets.

The first three sets were a nip-and-tuck affair that saw Air Force come out on top, 2-1.

With his team facing defeat in the fourth set, Joshua Umandal revived PLDT’s hopes and led a 3-1 rally to hand his team a four-point lead, 22-18, late.

Air Force fought back as Saura and Fauzi Ismail converted a kill block and an off-speed attack, respectively to cut the lead to two, 20-22. However, consecutive errors from Pitrus De Ocampo and Abdilla proved costly for the Jet Spikers as PLDT forced a deciding fifth set.

Umandal paced PLDT with 21 points, 20 of which coming from attacks while Pablico added 11 points, nine digs, and 11 receptions.

National Team stalwarts Mark Alfafara and John Vic De Guzman, who just like Abdilla and Bagunas were coming off a bronze stint with Rebisco-Philippines in the 2019 Thailand Open Sealect Tuna Championships, played limited minutes. Alfafara only played in the third set, finishing with just a point, while De Guzman had eight points, playing in just the last two sets.

Air Force will look to close it out while PLDT will fight for survival on Sunday, June 14 at 4:00 pm at the same venue.

Jia Morado deflects credit after fine Game One performance: ‘It was a total team effort’