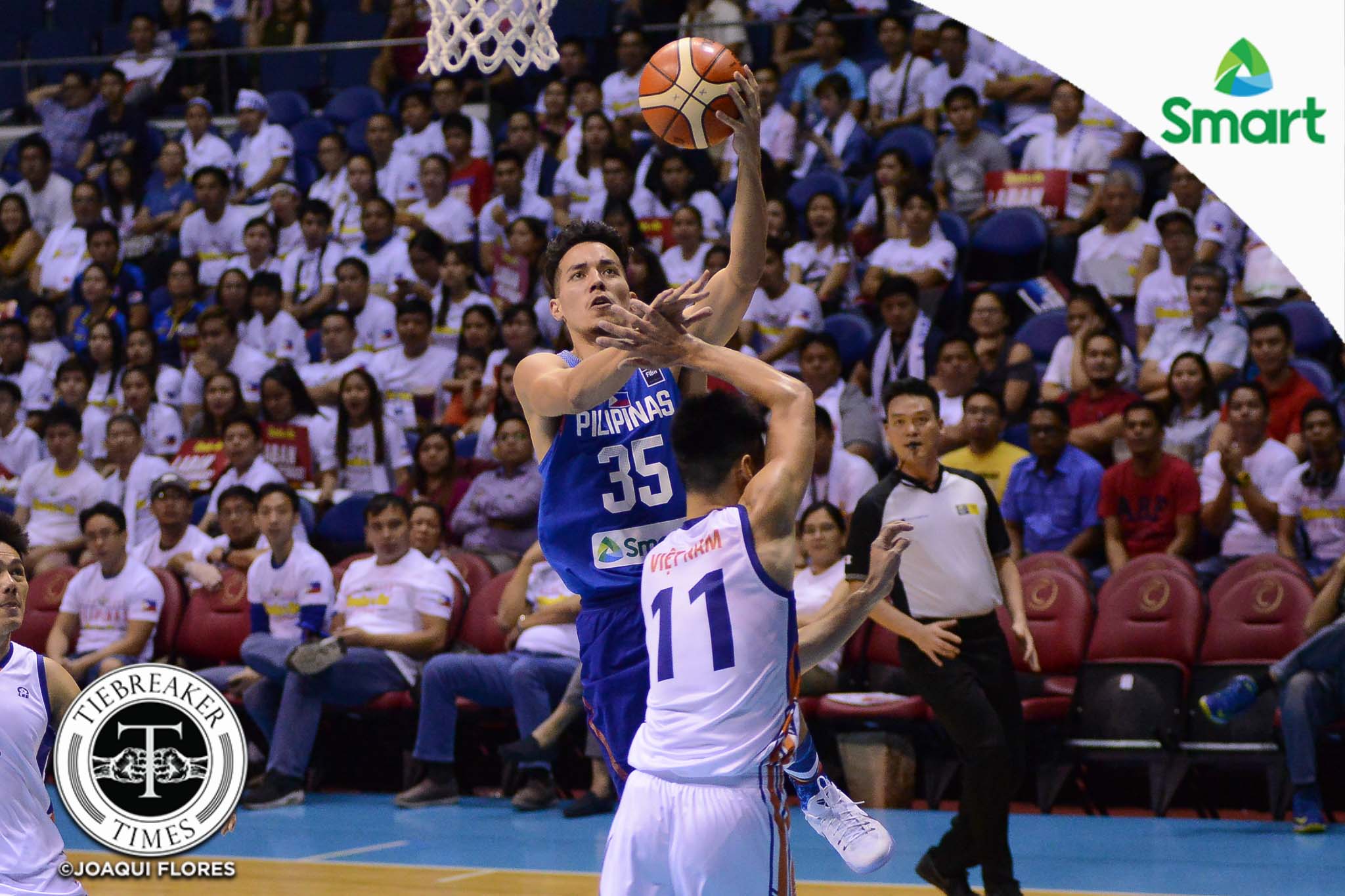 Matthew Wright has been a marked man ever since he was drafted by the Phoenix Fuel Masters last year. He has been the focus of double teams, and even triple teams, night in and night out.

But with the number of weapons Gilas Pilipinas have in their arsenal, the rookie’s life has become much easier.

During Gilas Pilipinas’ 107-52 victory over Vietnam to post their fifth straight win in the 2017 SEABA Men’s Championship Wednesday night at the SMART-Araneta Coliseum, five Filipinos anchored the balanced attack.

But it was Matthew Wright who glared among the leaders, finishing with a game-high 19 points on an impressive 7-of-9 shooting, with five of his shots coming from where he is truly comfortable at — the three-point area.

“My teammates found me and I hit some open shots. They played a zone defense and that’s how you beat a zone, you make shots,” remarked Wright of his best outing yet in the regional cagefest, deflecting credit to his teammates.

Ever since Gilas commenced their SEABA run last Friday, the 26-year-old has been fulfilling his role as one of the team’s main gunners. And after Wednesday, Wright is now shooting a notable 55.5 percent from distance, while averaging 12.6 points.

But for the Phoenix Fuel Masters rookie, those numbers are not just mainly because of him, iterating that the presence of Gilas veterans Jayson Castro and Terrence Romeo makes things easier for him.

“Those guys make my job easier.

“Terrence and Jayson [really helped me] especially today. They found me, they hit me in stride, they hit me in momentum. Having great passes like that makes my job easier, so I can’t take all credit,” the 2015-16 ABL ASEAN Heritage MVP said.

“Those guys definitely put me in good positions,” added the Filipino-Canadian shooting guard.

The Nationals are now heading into their final match of the tourney tomorrow Thursday night against Indonesia — a bout that is virtually the gold medal game and the match that will decide who will go to the 2017 FIBA Asia Cup.

#ReadMore  Ginebra motivated by Ulysses victims: ‘Our hearts are with our fans’

And Wright and the whole Gilas side are all set to head in the battle for supremacy in the Souteast Asian region.

“It’s gonna be a dogfight,” said Wright. “They improved, they have a naturalized guy, they have good shooters on that team — we watched film of them. It’s not gonna be a walk in the park tomorrow, that’s for sure.

“But they gotta guard us too.”

But coach Chot Reyes is hoping that their heat won’t die down on Thursday, May 18.

“Well, we all know what Matthew and Allein [Maliksi can do. That’s their role in this team. The key now for them is consistency,” the five-time coach of they year said. “Can they shoot the same way tomorrow when there are much greater stakes? When there’s a much tougher and much bigger opponent?

In this article:Chot Reyes, Matthew Wright