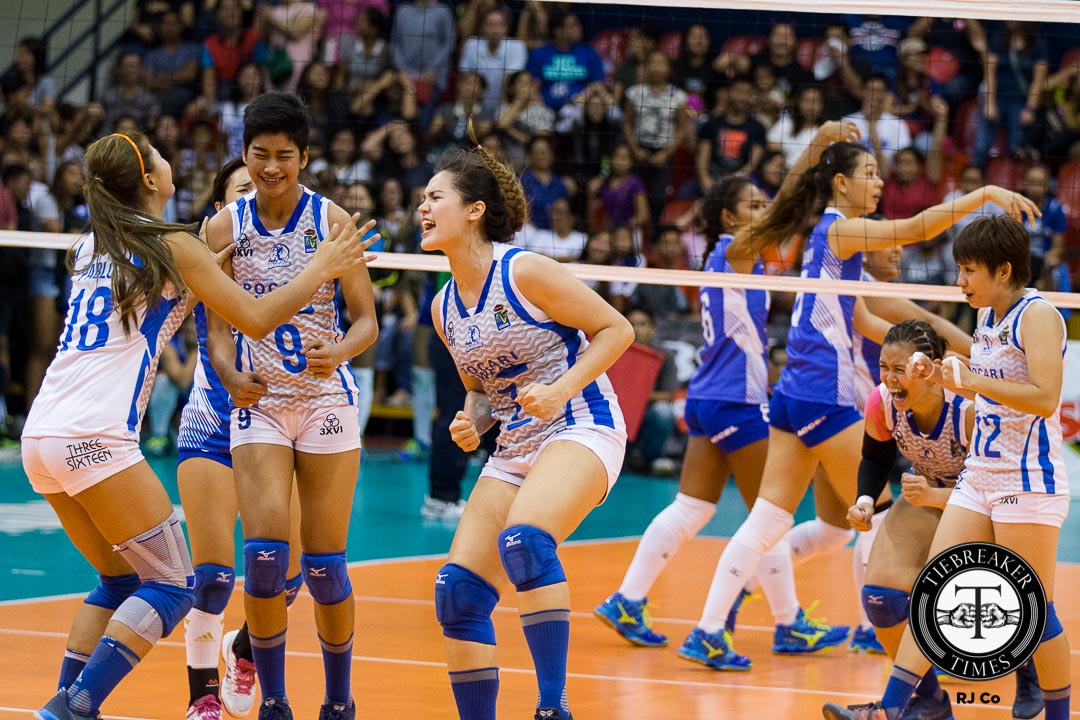 Rallying behind the leadership of their returning players, the Pocari Sweat Lady Warriors rallied to extinguish the Bali Pure Purest Water Defenders’ winning streak in five sets 21-25, 6-25, 26-24, 27-25, 19-17 at the PhilSports Arena in Pasig City.

Both teams’ open hitters clashed head on in the first set. Pocari’s Elaine Kasilag and Myla Pablo kept pace with Bali Pure’s MVP tandem of Alyssa Valdez and Grethcel Soltones, all the way to a 13-all tie, but Valdez and Soltones proved too much for the Pocari. Hits from Soltones allowed Pocari to go up to a 16-13 lead. Valdez then took her turn, converting smashes to get Pocari to a 23-20 lead. Trying to steal momentum, Pocari called timeout but the following plays still went to Bali Pure’s favor. Purest Water Defender Kiwi Ahomiro detonated a quick attack which Pablo followed with a botched back row kill, handing the set to Bali Pure.

Three straight aces from Bali Pure’s jump-serve dynamo Dzi Gervacio served as omen for Pocari in the second set. Gervacio’s serving baffled Pocari’s reception for a 5-0 lead. The Lady Warriors went as cold as Baguio and were never able to recover, sinking to a 2-21 hole and shaking their heads into the third frame.

Pocari rebounded with a better start to the third set, strutting to an 8-5 lead. The Lady Warriors protected their lead with Pablo crushing an attack for a 15-11 advantage. Bali Pure found their rhythm after a timeout, unleashing a 7-1 blitz to reclaim an 18-16 lead. Bali Pure’s reception and steady stream of points from their wingers afforded them a 23-21 lead, igniting a sudden Myla Pablo burst. The former Lady Bulldog poured in four straight kills to get Pocari to set point. The Purest Water Defenders manager to force a deuce in the next point but their own attack error followed by a Kasilag smashed extended the match to a fourth frame.

The fourth set was the closest frame of the match with both teams trading hard spikes and unfoced errors. The frame wound down to a deuce with Pocari getting first crack at match point. But Valdez constantly kept her team alive with well-placed dropped shots. Tied at 26, Ahomiro served long giving way for Kasilag to land a serve right between two Bali Pure receivers to force a fifth set.

Pocari looked to have the comeback in hand as they bolted to a 10-4 lead. But Valdez kept Bali Pure in the match. Combined with Ahomiro’s serving, Valdez led Bali Pure to a 12-all tie and eventually another long deuce. Trading service errors and frantic plays, Pocari came out on top thanks to a late Dzi Gervacio attack error then a Myla Pablo smash off the block.

Pocari (6-0) stakes their undefeated record on Monday at the PhilSports Arena when they face the Air Force Jet Spikers (5-1). Bali Pure ends the elimination round with a 5-2 slate.