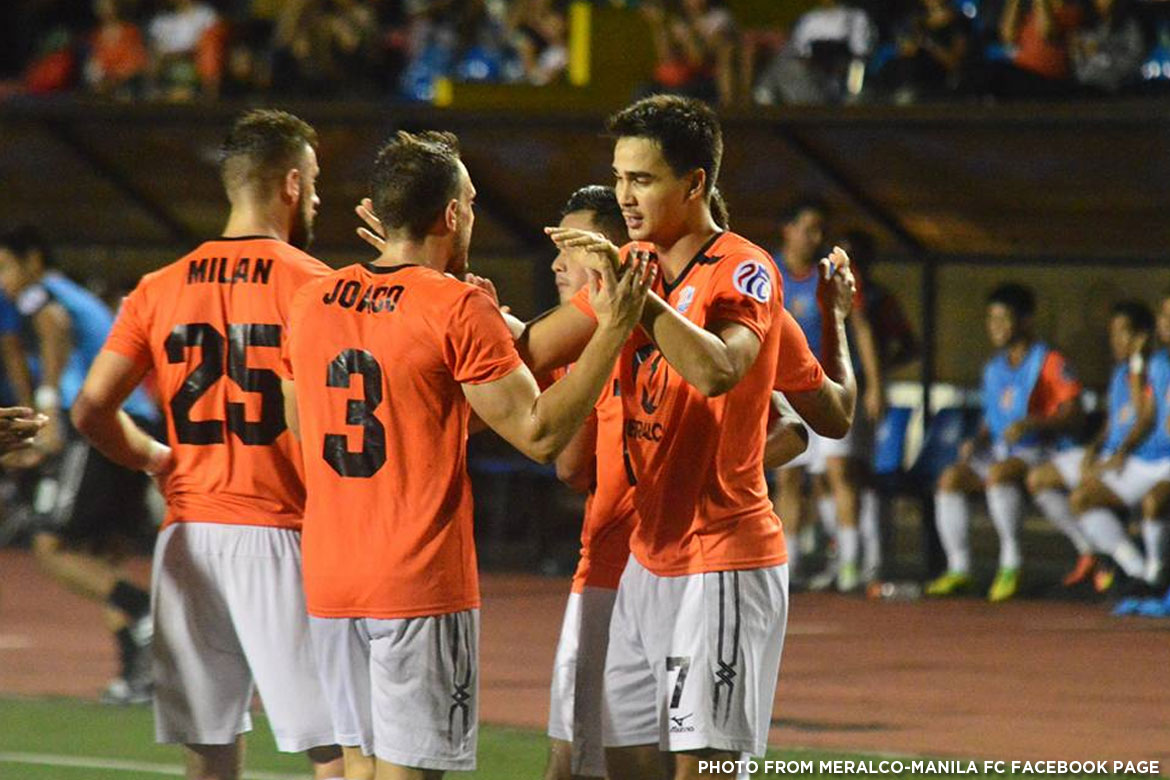 The Meralco-Manila FC Sparks preserved their reign on top of the Philippines Football League after they surpassed a tricky encounter against fellow National Capital Region-side JPV-Marikina.

Elsewhere, heavy favorites Kaya-Makati, Global-Cebu, and Ceres-Negros stamped their class on their lowly opposition to rack up important points. Here’s how each game unfolded this weekend:

James Younghusband came to the rescue for the league leaders Meralco-Manila FC when they overcame a stiff challenge presented to them by then second-seeded side JPV-Marikina on Saturday at the Rizal Memorial Stadium. The Sparks edged Voltes, 2-1, at full time needing to withstand a deficit in manpower for the last 15 minutes of the match.

In a frantic match that saw both teams eager to break down each other, the men in orange took the lead in the 23rd minute through an unfortunate JPV own goal credited to Masaki Yanagawa. The former Global defender aimed to help Nelson Gasic in clearing the ball away but had instead turned it into his own net to the delight of Meralco-Manila fans.

JPV-Marikina did not stay behind for long as a defensive lapse committed by Daniel Gadia allowed the men in violet to launch a counterattack initiated by John Celiz. He eventually found Satoshi Otomo who smashed the ball past Junjun Badelic. Meralco looked the better of the two sides since then but were unrewarded heading into the break as the score stayed 1-1.

When play resumed, Meralco also continued to pile the pressure on Voltes. Tahj Minniecon and Phil Younghusband spearheaded the charge and both looked threatening whenever they were given the green light to shoot. As time slowly winded down, Sparks mentor Aris Caslib gradually shuffled his deck with the aim of finding the breakthrough goal. In doing so, he got what we was looking for when one of the substitutes put his team back in front.

James, coming on for Simon Greatwich, was just four minutes into the game when he headed in Tyler Matas’ long throw in the 68th minute. It proved to be enough for Meralco to take the win, but not before their character was tested late in the game.

In the 76th minute, Gadia was sent off for a second bookable offence leaving his team down by a man. Nonetheless, JPV-Marikina couldn’t take advantage in the end and were left frustrated by it come full time as the Sparks held on to a 2-1 victory.

Speaking after the match, Caslib recognized an important aspect in the Sparks’ game after the hard-earned result. “They want to go to the next level and the next level is really developing the team spirit and being competitive in all matches. I appreciate the effort of the entire team,” the former Azkals coach uttered.

Unbeaten in the league so far, the Sparks will be tested this coming week when they face the two teams that finished higher than them in the United Football League last season: Global-Cebu and Ceres-Negros. Armed with momentum, the lads in orange are hoping to get through the week with their position on top intact.

Playing on Sunday night, Global-Cebu knew that a victory in their second game at the Cebu City Sports Center will put them in solo second following the earlier results in the weekend. Standing in their way were Stallion-Laguna, a struggling team that nonetheless knows how to cope with the might of the Cebuanos. The 1-1 result in Biñan earlier this season testifies to their grit against a team like Global.

However, playing in their new home made Global superior in this encounter. They forced their visitors to defend for most of the half with Stallion fortunate to escape halftime still level with the hosts. All of it changed in the second half when Akbar Nawas’ boys finally broke the deadlock.

Captain Misagh Bahadoran scored the first goal in the 48th minute and from that moment, the home team only thought of adding more to their tally. The People’s Club got their second goal six minutes after the hour mark through the 30-year-old Azkal who ended the night with a brace.

Stallion-Laguna, who sports the worst goal difference in the league, failed to prevent their opponents from inflicting more damage as an 86th minute Shu Sasaki strike condemned them to a sixth league defeat. It’s worth noting that out of those six losses, five had come with a margin of at least three goals. Fortunately for them, they have enough points to stay above Ilocos United in the table.

As for Global-Cebu, back-to-back home wins in their home ground this past week will serve as a timely momentum boost ahead of their midweek encounter at home with league leaders Meralco-Manila.

Coming off a disappointing 1-0 defeat away to Global-Cebu last Wednesday, Ceres-Negros brushed off their woes in sensational fashion by registering bottom-side Ilocos United their worst defeat in the league. The northern Luzon club absorbed their worst defeat in the league when they were hammered 7-0 by the Busmen on a rainy Saturday afternoon in Bacolod.

German football veteran Stephan Schröck got the ball rolling for Ceres-Negros, opening the scoring just 11 minutes after kickoff. The former Hoffenheim player then teed up Jeffrey Christiaens 15 minutes later to pad the Negrenses’ advantage. The floodgates have certainly opened, much to Ilocos United’s dismay as the hosts never looked back. Fernando Rodriguez got himself on the scoresheet when he was given ample time and space to punish the Ilocanos’ haphazard defending.

Already down 3-0, Ilocos unsuccessfully tried to reduce the deficit at the very least. Dominic del Rosario and Ben Tolete both had a go but failed to force a save from Michael Casas, who actually almost gifted the visiting team a lifeline. Fortunately for the former Philippines international, he managed to keep the ball out when he missed a back pass looking to sneak into the back of the net.

Dodging a mishap, Ceres-Negros looked to ship more goals in as they looked to boost their goal difference. Inside the last quarter of the match, the Bacolod-based team got what they wanted through the efforts of OJ Porteria, Super Herrera, and Patrick Reichelt. Porteria grabbed a quick-fire brace within three second half minutes. The Spanish defender followed suit before Reichelt, sidelined for 10 months due to an injury, capped a night Ilocos United would like to forget.

On the road this week, Kaya-Makati left the Davao del Norte Sports Complex happily as they collected a huge 5-1 away triumph against the Davaoeños. Despite the final score, the affair between the two sides was much closer than the result suggests.

Both Ref Cuaresma and Marko Trkulja were called into action early and the opposing goalkeepers were up to the challenge. Eventually, the first goal arrived inside 20 minutes for the away team. It was Joven Bedic who supplied the decisive on a Robert Lopez Mendy pass to put Kaya-Makati in front. It turned out to be the only goal of the first half which saw plenty of attacks snuffed out by both defenses.

The second half provided better entertainment quality, started by a quick Davao goal just four minutes after the restart. Nikola Grubjesic nabbed the equalizer to make it interesting heading into the next 40 minutes of play. Things were looking up for the hosts but a 55th minute setback changed the complexion of the match in favor of Kaya as Aguilas defender Jason Cordova saw a straight red card for his rash challenge on Marwin Angeles. Playing with a man more on the field, the visitors took full advantage.

Just three minutes after the sending off, Kaya regained the lead thanks to Alfred Osei. The Ghanaian nodded the ball from a Miguel Tanton set piece past Trkulja. The home team still had a fight left in them, but playing with a man less made their situation more difficult. In the end, they fell powerless to Kaya’s dominance by conceding two late goals scored by Eric Giganto and Kenshiro Daniels that rounded up the seemingly flattering 5-1 demolition.

Coming up in the PFL this Wednesday is another top-of-the-table clash between Global-Cebu and Meralco-Manila to be played at the Cebu City Sports Center. A win for the home side will allow them to share the league leadership with their upcoming adversaries. Kickoff is slated at 7pm.