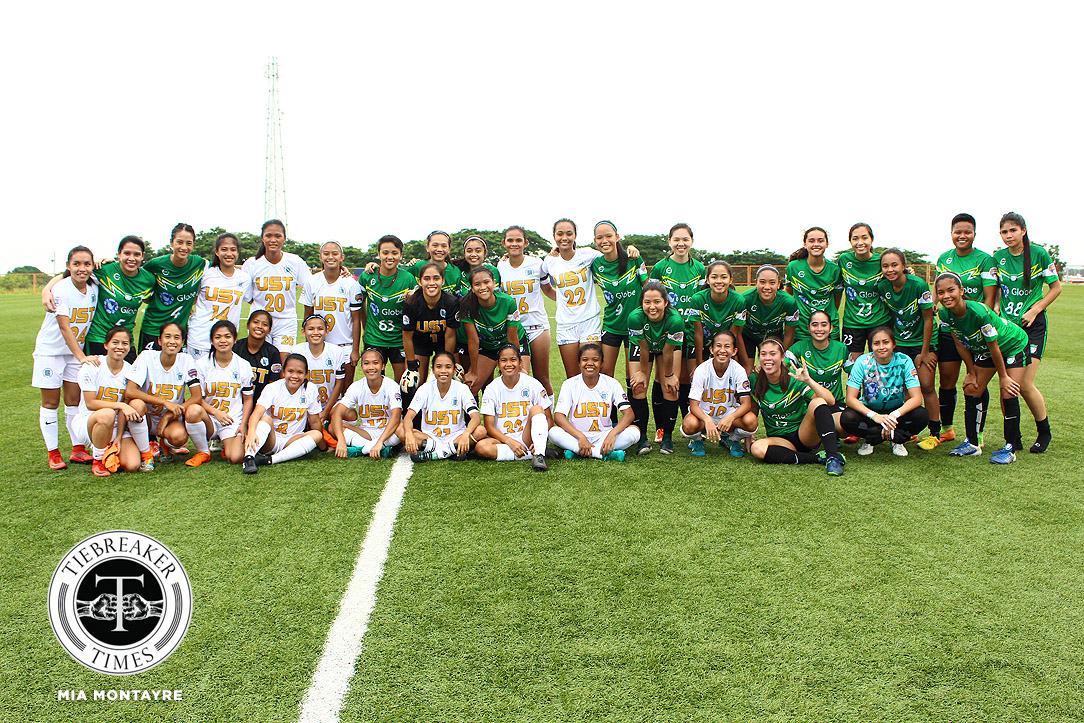 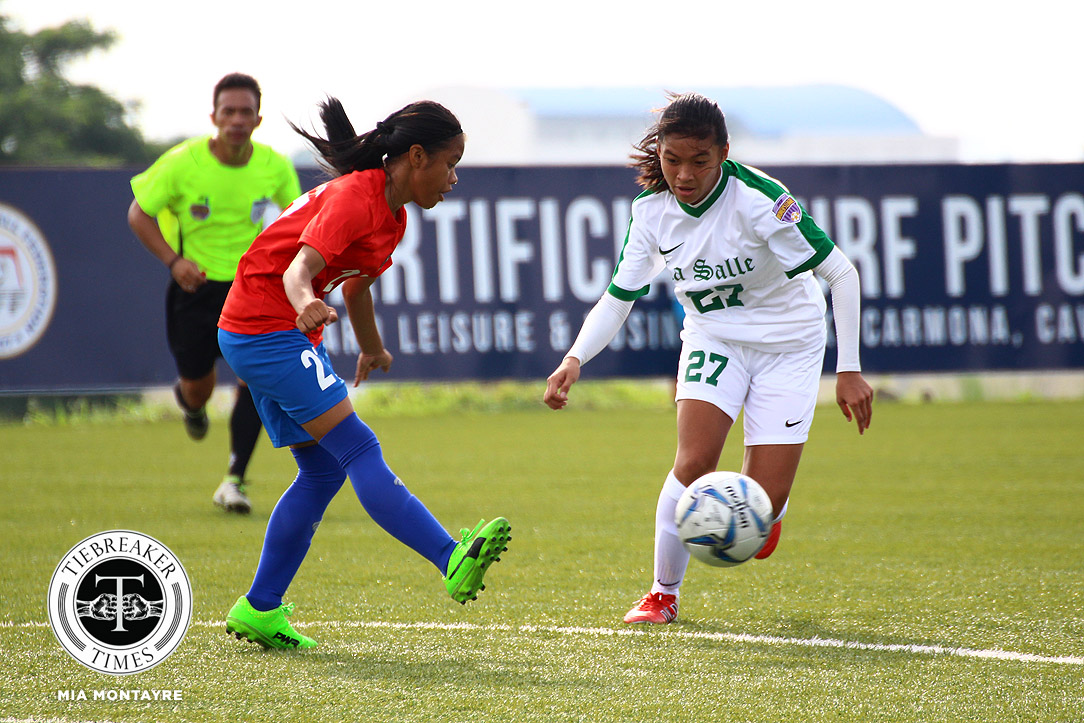 With the last season being very successful for the De La Salle University, they step into the new season hoping to defend two titles – the PFF Women’s League and the UAAP – and the Lady Booters got off to a winning start in the former by holding off the gutsy challenge by league newcomers Tuloy FC, 1-0.

Former Green Archer United FC turned Lady Archer Alisha Del Campo scored the league’s opening goal within fifteen minutes after Janna Barcemo supplied the pass from the center. It turned out to be the only goal of the match, as the ladies in green and white struggled to finish many opportunities, especially in the second half.

Albeit much younger and very new to the higher level of football, Tuloy FC did not shy away from trying to take the match back. They stunned La Salle’s defense as they looked for a goal of their own, which kept custodian Natasha Lacson on her toes.

By their standards, it would prove to be an underwhelming win but DLSU will take it, extending an active winning streak to 14 after they swept last year’s edition. Yet long-time mentor Hans-Peter Smit could not help but be critical of his squad, even as he was recovering from a recent major medical procedure.

“Tuloy FC has a good program but it’s the sickness of my DLSU women. Every first game of every tournament, kahit UAAP, they play like that. They have to step up, there’s no other way but to be better,” he said. 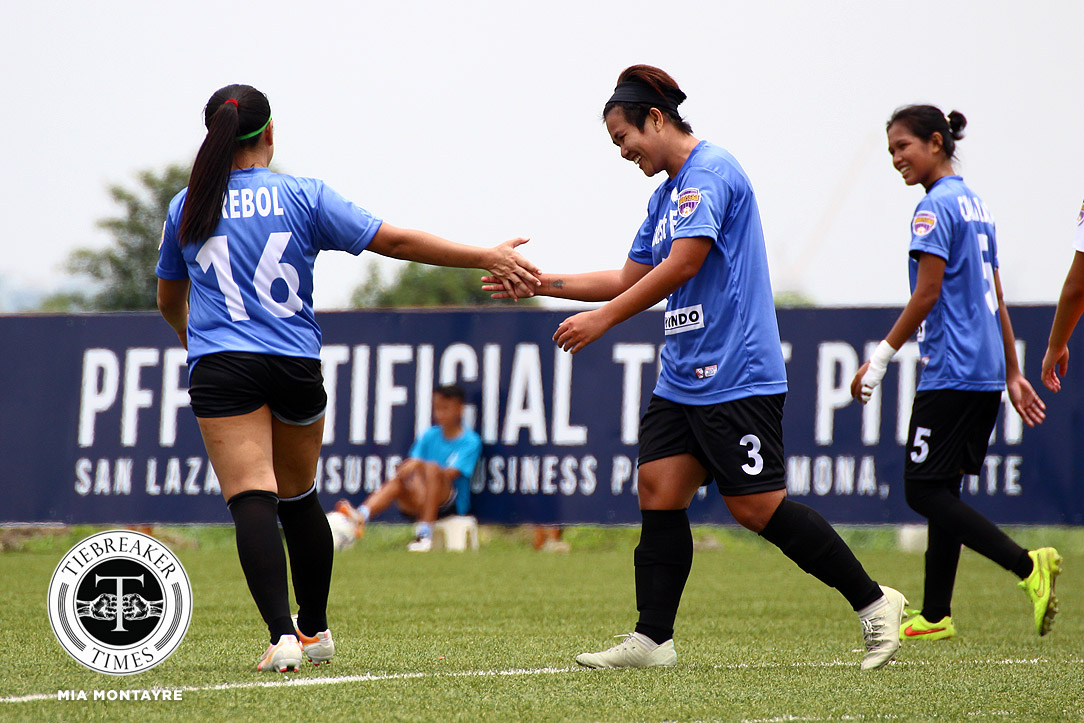 Finishing last season in the bottom half of the order, OutKast FC look to do better this year and showed no mercy towards their younger counterparts on their first outing, taking a 10-2 rout over the De La Salle Zobel Lady Junior Archers.

Sharmine Siaotong opened fire inside 11 minutes, then Lindsay Whaley quickly doubled the scoreline when she guided the ball towards the goal before crashing into keeper Raquel Almeda. Five minutes later, it was Jennizel Cabalan’s turn to put her name on the board.

The high school outfit from Alabang did not appear to be discouraged, and were able to pull a goal back when Malina Hill’s free kick was too strong for Yasmin Elauria to handle. But the ladies in blue quickly responded via Siaotong’s brace, and goals from Alesa Dolino and Loreta Ladero before the half ended.

The girls of Zobel were feeling defiant once again, as Kara Isobel Alinsug scored shortly after restart only to be answered again by a flurry of goals that completed Siatong’s double brace in the 54th and 68th minutes, along with Monica Trebol’s and Kim Cupal’s contributions in the 60th and 69th minutes.

“It’s a good win,” said OutKast’s new coach Jo Loren, who was quite pleased to find her players easy to handle.

“They are experienced players so all I needed to do was remind them basic things when it came to defending and attacking. But we need to prepare more especially for the college teams kapag sila na ang kalaban,” she added. 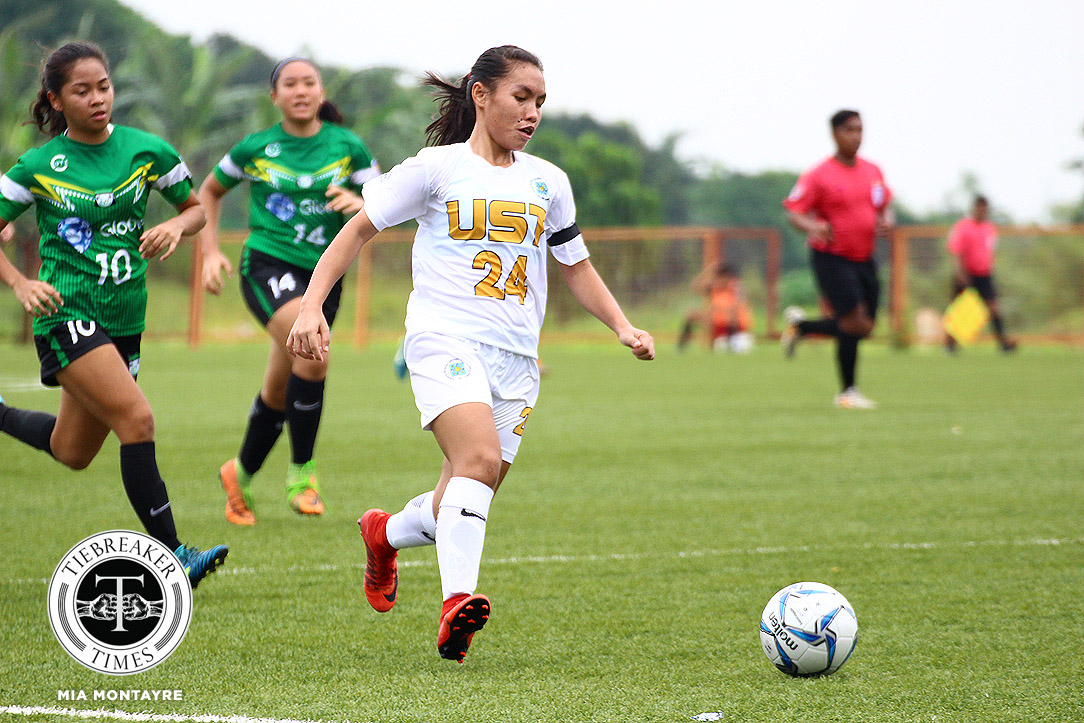 The University of Santo Tomas Lady Booters have been consistent in producing their best football in recent years but have somehow not been able to bag a title, only finishing second in UAAP Seasons 79 and 80 including last year’s PFFWL.

Fed up with the disappointing trend, the ladies from España launched their campaign in menacing fashion, blowing out a Green Archers United FC bolstered by fresh graduates from rivals DLSU – including the impervious national team keeper Inna Palacios – 7-1.

Reliable striker Shelah Mae Cadag quickly went to work, slotting in a goal in the 4th minute. Rookie Lalaine Durano added another a minute later which seemed to wake Palacios up, as she denied several shots afterward. But the holes in GAU’s defense would prove to be too much for her to cover, as Cadag found her hat-trick in the 42nd and 60th minutes.

Rookie Mika Punzalan’s top of the box strike made it 4 to nothing in the 70th minute. The Archers were clearly struggling to get their offense going until an inspired run from winger Arianna Tuason led to a Nicole Andaya breakthrough with 9 minutes left. But then the Tigresses would have none of that, responding shortly with two more goals within three minutes of each other from veteran Charisa Lemoran and Nathalie Absalon.

After the win, Coach Aging Rubio made no secret of her motives from this tournament.

Rookie goals edge FEU past UP in thriller 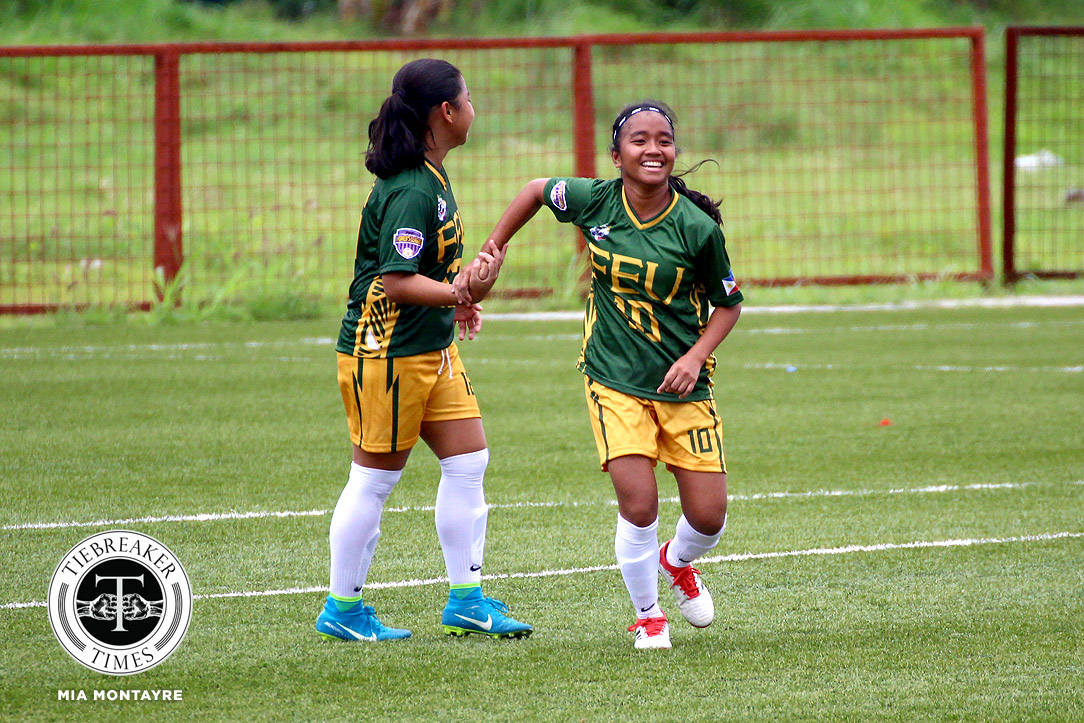 The weekend’s most exciting match naturally came at the feet of the first all-collegiate fixture, and the Diliman derby did not disappoint, with the Far Eastern University Lady Tamaraws eking out a 2-1 win over the University of the Philippines Lady Maroons.

The Lady Tamaraws are riding on their resurgent success, having finished last season in third in both the PFFWL and the UAAP, while the Lady Maroons have never been more hungry for a breakthrough.

Despite still looking for her best pre-injury form, Mary Rose Obra put the Lady Maroons ahead in the 12th minute at close-range after a pinpoint cross from Abigail Corvera. But FEU refused to be rattled as they searched for the equalizer, though UP continued to be aggressive as well in search of a consolidating goal.

In the end, it was the Lady Tamaraws who thrived in the tug-of-war thanks to the stunning efforts by their rookies. It was only seconds after Carmela Altiche was subbed in that her header from a corner situation levelled the scoreline in the 58th minute. Then at nearly fulltime, Elna Bongol, also a substitute, struck from the top of the box that beat Vanessa Estrada to gift the ladies in green and yellow the win.

Coach Let Dimzon later admitted they were only lucky to get the victory before revealing that she still has frustrations with her players.

The 2018 season of the PFF Women’s League continues on September 1 at the PFF National Training Centre in Carmona, Cavite starting with Ateneo de Manila University joining this season’s action against Tuloy FC at 8:00 A.M. followed by Hiraya FC with their opener against De La Salle University at 10:30 A.M.