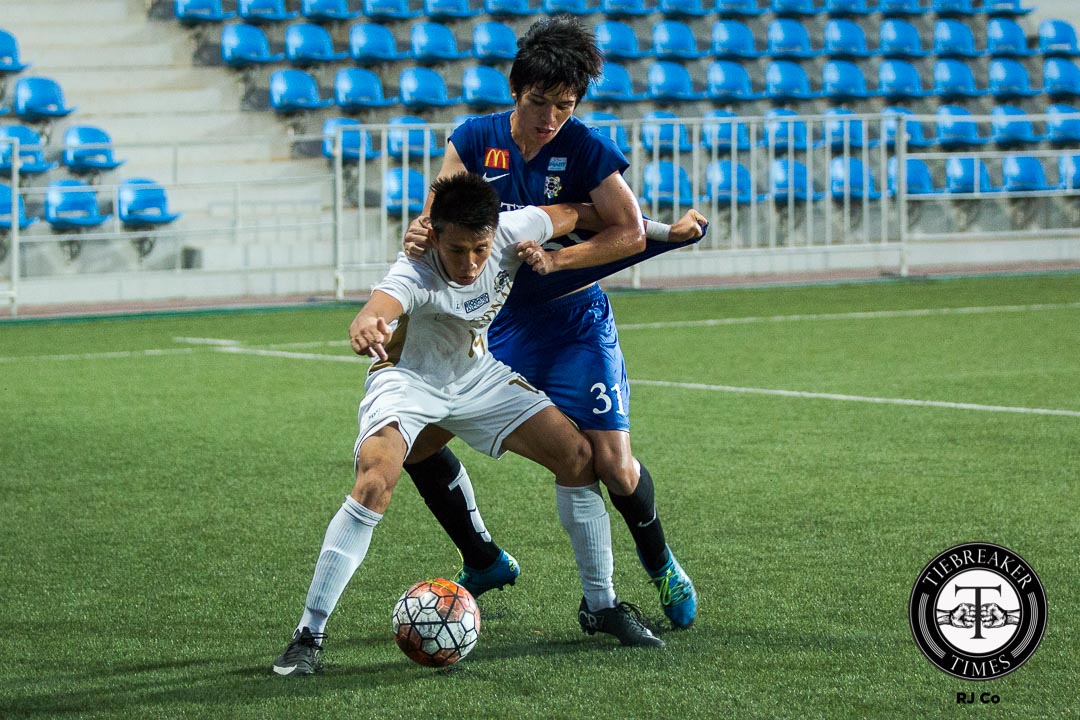 If there was a bad time to drop points, then it had to be tonight (April 17, 2016) at the McKinley Hill Stadium. The Ateneo de Manila University Blue Eagles needed to win in order to secure a Final Four spot. Alas, the Blue Eagles failed to do so against the National University Bulldogs, who played the role of party spoilers.

The result, though, proves more costly for Ateneo, as dropping points now means they must rely on other results in order to qualify for the Final Four. The Blue Eagles are now in 3rd place with 25 points. On the other hand, NU finish the season in 6th place with 17 points.

NU and Ateneo started the game on equal footing. It was an open exchange between the two, as both were searching for goals. As the game went along, though, it was NU whose forwards displayed more potency in attack. Save for one Blue Eagle free kick easily dealt with by Bulldogs goalkeeper Chris Perocho, NU were the ones creating chances.

Lawrence Colina and Paolo Salenga had attempts on goal, yet the two Bulldogs failed to test Blue Eagles goalkeeper Kenneth James. Afterwards, Salenga and Macapal performed some slick passing which enabled the latter to get a sniff at goal, but it was cleared for a corner. Macapal finally got the goal he deserved in the 28th minute when he dribbled past an approaching James and directed the ball home from a narrow angle.

Not to be undone, Ateneo pushed for an equalizer from the restart. The NU defense, though, held its own and something special was needed to break it. That occurred when Carlo Liay held up the ball well and played Yoshioka through. Yoshioka timed his run to perfection and found himself one-on-one against Perocho. With Perocho out of his goal, Yoshioka lobbed the ball upwards and it eventually found itself at the back of the net in the 34th minute.

Despite having less possession, it was Ateneo who made their chances count. NU conceded another free kick when Chima Uzoka fouled Yoshioka at the edge of the Bulldogs’ box. Ocampo Gayoso stepped up and unleashed a powerful free kick which left Perocho helpless to give Ateneo a 2-1 lead in the 41st minute. That was the last bit of action before halftime, with Ateneo entering the break on top.

Contrary to the first half, Ateneo started better come the second period. Ocampo Gayoso and Julian Roxas had attempts on goal which were cleared for corners. The Blue Eagles kept on pressing for the insurance goal, but they were restricted chances-wise due to the firm Bulldogs’ defense. And then, out of the blue, NU equalized courtesy of Macapal in the 59th minute. Macapal seized upon a defensive error by the Blue Eagles and slotted the ball into the bottom-right corner.

With the game in balance, both teams looked for the goal which would surely have wrapped up the game. The Bulldogs had a header cleared from a free kick, while Blue Eagles captain Mikko Mabanag had two attempts of his own, one of which went over while the other was caught by Perocho.

As it stood, Ateneo were in danger of missing out on the Final Four. Even a point wouldn’t secure the Blue Eagles a spot in the post-season. Urgency then crept in for the Blue Eagles, and some poor shooting didn’t help their case after Liay and Clavano failed to properly threaten Perocho.

That’s not too say, though, that NU were content with the draw. The Bulldogs would have scored if it hadn’t been for Roxas putting his body on the line. And then the sting on the tail occurred in the 90th minute of the game. With nothing to lose, the Bulldogs went forward, and Viray’s late run into the Ateneo box allowed him to shoot the ball home. Ateneo were stunned, as a loss would have as good as knocked them out of the Final Four.

The Bulldogs, though, weren’t street-wise. Similar to their 2-3 loss against the De La Salle Green Archers, the Bulldogs failed to keep the ball. Just keeping the ball in the corner would have been enough, yet they didn’t do so. NU invited pressure. Xavier Alcuaz should have headed in an equalizer, while the crossbar also denied the Blue Eagles.

The Blue Eagles weren’t to be denied an equalizer, though. Right before the match ended, NU conceded a free kick outside the box and Ocampo Gayoso converted once again in the 90+5 minute. As with his first goal, Perocho couldn’t do anything about Ocampo Gayoso’s powerful shot. The final whistle soon blew and the match ended NU 3-3 Ateneo.

Both teams have played their final elimination round match tonight. NU failed to make the Final Four, while Ateneo’s entry and potential placing is dependent on other results. If ever Ateneo do make it to the post-season, their next game will be on Thursday (April 28, 2016) at the Rizal Memorial Stadium in Manila.