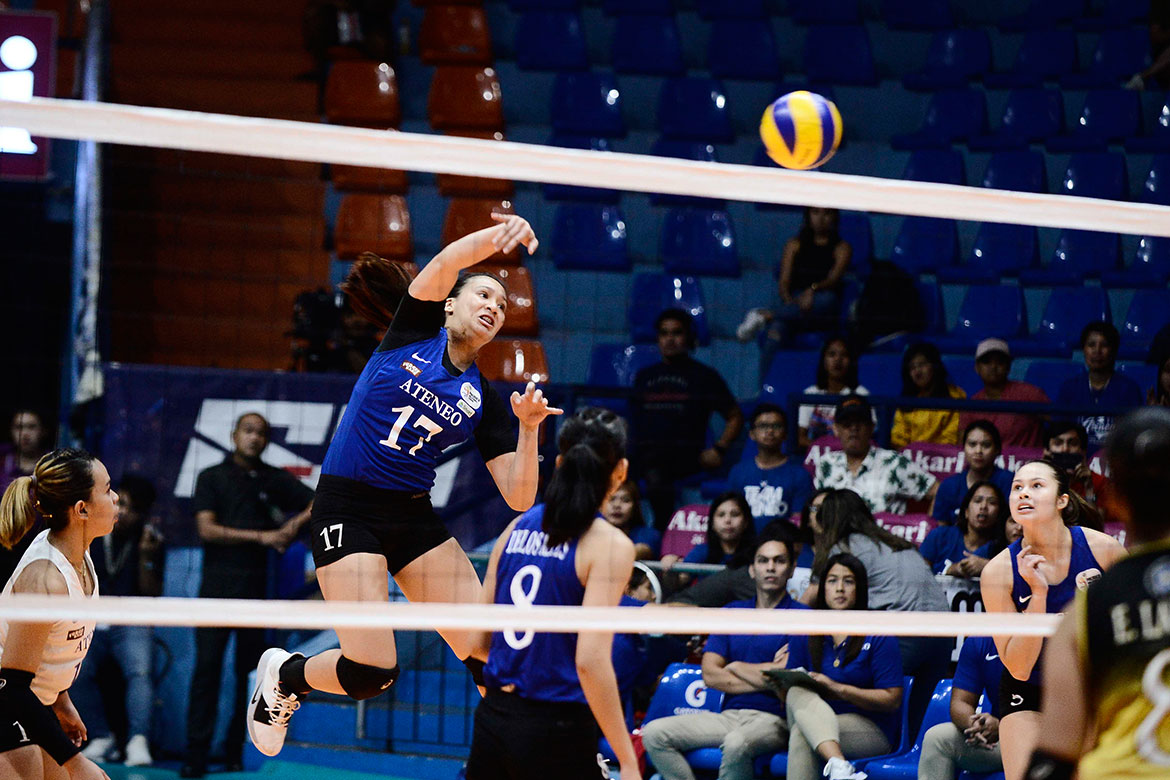 Despite not having the same pivotal cogs that reigned supreme in the UAAP Season 81 Finals, the Ateneo de Manila University still upended the University of Santo Tomas in the much-awaited rematch, Sunday.

The product of Nazareth School of National University led the offensive thrust for the Lady Eagles, who also strung solid contributions from Erika Raagas and Vanie Gandler.

Raagas supplied 16 markers, while Gandler chimed in 15 points — spiked by a pair of kill blocks.

“It’s a learning, every day is a learning day, and you just have to acknowledge what you can do, and what you can contribute to the team. Everybody contributed and may factor rin ‘yung trust nila sa isa’t isa,” said Ateneo head coach Oliver Almadro, who missed the services of the duo of Ponggay Gaston and Roma Mae Doromal that competed in UAAP Season 82 beach volleyball tournament.

“Nakapagpahinga naman kami, nagkaroon pa kami ng chance para makapag-prepare but I give it to the players, they really want it today,” he added. “Kumbaga parang, sabi ko nga, it’s not about everything, anything else, it’s about acknowledging what you can do.”

The Lady Eagles almost ended the match in straight-set fashion had they completed a stunning comeback in the second frame. However, Eya Laure strapped UST behind her back at the critical juncture of the said set.

Raagas and Nisperos put up the momentum-swinging hits for the Lady Eagles, who saved two set-points to soar out of a 22-24 hole and force a deuce. Though Gandler coughed at the service line that gave UST a slim edge, Nisperos snatched the lead back with consecutive blows.

Not to be denied, Laure flaunted her ability to put flavor on her attacks. The UAAP Season 81 Rookie of the Year detonated a booming cross-court hammer to forge a deadlock at 26, before bamboozling the Ateneo defenders with an off-speed ball that broke the knot. Raagas then muffed a scoring opportunity.

Laure poured in a triple-double performance that went for naught. She finished with a team-high 14 points, to go along with 14 excellent digs and 10 excellent receptions.

Her elder sister, EJ, also had an all-around outing of her own that, unfortunately, came in a losing cause. She hammered down eight attacks, two blocks and a service ace for 11 points, all the while collecting 10 excellent receptions.

Imee Hernandez and Rachelle Roldan managed nine and eight markers, respectively, for the Golden Tigresses, who suffered their first loss in the PVL Collegiate Conference.

Game Two is on Wednesday, October 2, at the same venue.