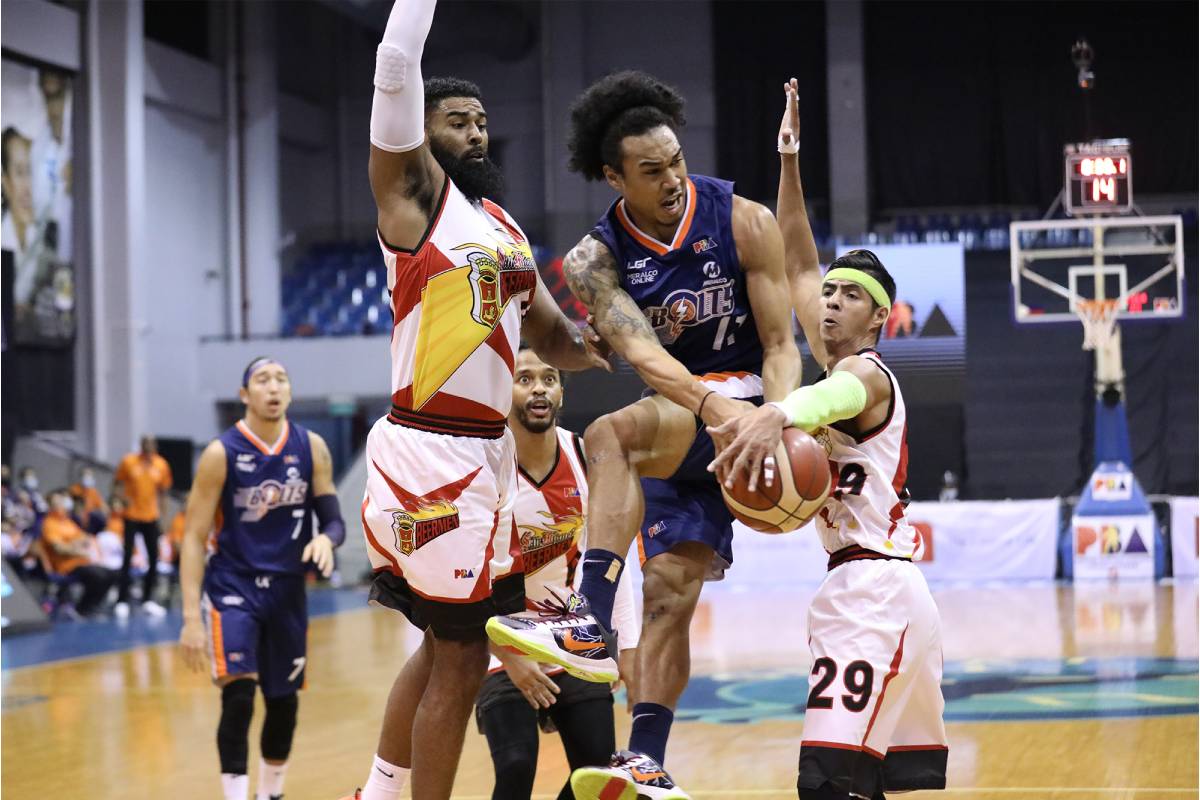 The Bolts, who are just in their first all-Filipino playoff stint in five years, emerged victorious in the quarterfinal sudden death to end the Beermen’s unprecedented half-a-decade rule of the league’s most prestigious conference.

Meralco booked its first-ever semifinal trip in franchise history with the resounding victory and will figure in a showdown with rivals Barangay Ginebra San Miguel in a best-of-five series that begins this Wednesday.

Cliff Hodge and Baser Amer shared scoring honors as they finished with 14 points apiece to lead the Bolts. The evergreen Reynel Hugnatan produced 12 points, while Allein Maliksi chimed in 11 markers.

Meralco, just like in their meeting last Friday, had another solid start into the match as it led 16-6 late in the first quarter, and it would never relinquish its hold of the driver’s seat the rest of the way.

It continued on pounding the following chapter that saw the Bolts post a 40-18 lead following a Maliksi trey past the midway mark, although the opposition would fight back after that behind the efforts of Marcio Lassiter.

The deadly sniper scored the first 11 of the Beermen’s last 13 points to end the half, and he continued to light it up even after the intermission as he nailed back-to-back treys to trim the gap to just six, 37-43.

But that proved to be the closest SMB could get as there was no stopping Meralco. Hodge and Chris Newsome sparked a 16-0 power surge that propelled them to a 69-43 lead with less than three minutes left in the third.

The Bolts’ lead would reach as high as 28 points, 80-52, following an Aaron Black bucket off a drive and the result would never be in question as they did not allow their foes to earn any momentum for a comeback.

“Tonight was really a focus on defense. We knew what we wanted to do defensively,” said Black. “It worked very, very well because the players really executed the game plan, so all hats off to them.”

Lassiter finished with 20 points while Mo Tautuaa also scored 20 markers alongside 11 rebounds as they led the Beermen, who faced a bevy of challenges this season, particularly injuries.

San Miguel entered the bubble without June Mar Fajardo as the reigning six-time MVP continues his recovery from a leg injury, and it suffered another setback when it lost Terrence Romeo to a dislocated shoulder.

The established vets were then left to hold the fort for the Beermen but Chris Ross suffered injuries as well, although he played through it. Alex Cabagnot and Lassiter both got hurt, too, prior to the postseason.

Still, they managed to end the eliminations as the fourth-seeded team with a 7-4 card and with the win-once incentive, but it was just unfortunate that the aforementioned issues plus fatigue ultimately took its toll on them.