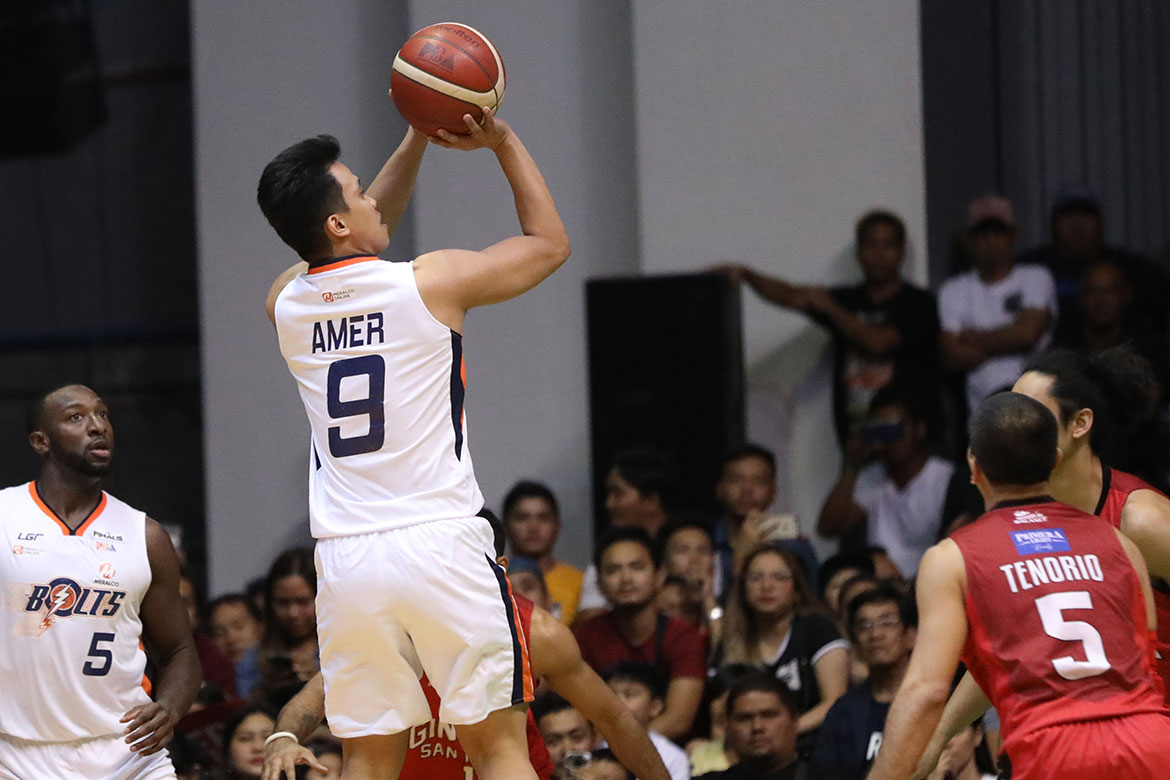 The Bolts already held a 101-91 advantage with 2:12 remaining in the game. But Justin Brownlee and LA Tenorio joined hands to spearhead the Gin Kings’ 11-3 run, making it just a two-point game with 3.1 seconds left.

Still, the Orangemen managed to hang on. Nico Salva got the ball and milked the clock by evading Ginebra defenders, preventing them from giving up a foul that would freeze the time and possibly give the Barangay a chance for another shot.

“We wanted to tie the series. It was a little bit scary with them hitting three three-point shots in the last minute, but a win is a win, and it gives us a chance to even the series and move on to the next game,” said coach Norman Black.

Baser Amer overcame early foul trouble and produced 17 points on 54.5-percent shooting, including 5-of-9 from beyond the arc — this, after being silent in the series opener last Tuesday, with only nine markers.

“There’s nobody happier than me to see Baser really break out and explode against Ginebra. He was able to make some long three-point shots when he got back in the game in the second half,” lauded Black of the 27-year-old.

Chris Newsome had 17 points as well with seven assists, while Nard Pinto came off the bench and made 12 points. Raymond Almazan flirted with a double-double as he finished with 15 points and nine rebounds.

Pinto took Amer’s place after the latter picked up his second foul less than four minutes into the match. He immediately made an impact, drilling four treys in the opening frame alone that gave the Bolts a 31-17 lead.

Meralco continued the onslaught and led by as many as 19, after an Amer triple with 33.5 ticks left in the second frame.

But the Gin Kings slowly chipped away the deficit come the third quarter behind Tenorio, Stanley Pringle, and Japeth Aguilar. They eventually tied the game up at 70-all following Brownlee’s floater with 2:31 on the game clock.

Amer, though, quickly broke the deadlock with a three 18 seconds later. Other Orangemen such as Nico Salva and Bryan Faundo then helped their floor general keep the Barangay at bay with their timely shots.

The Bolts kept their hold of the driver’s lead after that. Another Amer three-ball from way downtown gave them the 101-91 advantage, before withstanding the crowd darlings’ last-ditch attempt to save the game for their side.

Meralco’s bench led by Pinto, Salva, and Anjo Caram were truly a major key. The bench outscored its counterparts, 29-12.

“The bench gave us a big lift. In the last game, they weren’t really there, but I called Nico Salva off the bench for the first time in a long time and he delivered for us. Anjo Caram played well. Nard Pinto was a revelation,” Black said.

Meralco had 16 treys — which, according to league stats chief Fidel Mangonon III, is an all-time PBA Finals franchise record. Its previous most was 12 in Game Six of the 2017 Governors’ Cup; and in Game Four of the 2016 edition.

“We shot the three-ball well tonight, but they also shot it well,” Black said. “Everybody could really see here. But I gotta be honest and frank with you, this was all about just trying to even the series, get it 1-1.”

Brownlee led Ginebra with 35 points and 11 boards in the loss that spoiled a historic feat of his. He now owns the record for most PBA career threes by an import with 329, surpassing ex-San Miguel import Lamont Strathers (325).

Pringle played his best game in the series so far with 23 points on a 53-percent shooting clip along with 10 rebounds and four assists. Aguilar supplied 18 points and eight boards, while Tenorio chimed in 10 markers.

Game Three of the best-of-seven affair will be on Sunday, January 12, 6:30 p.m. at the SMART Araneta Coliseum.