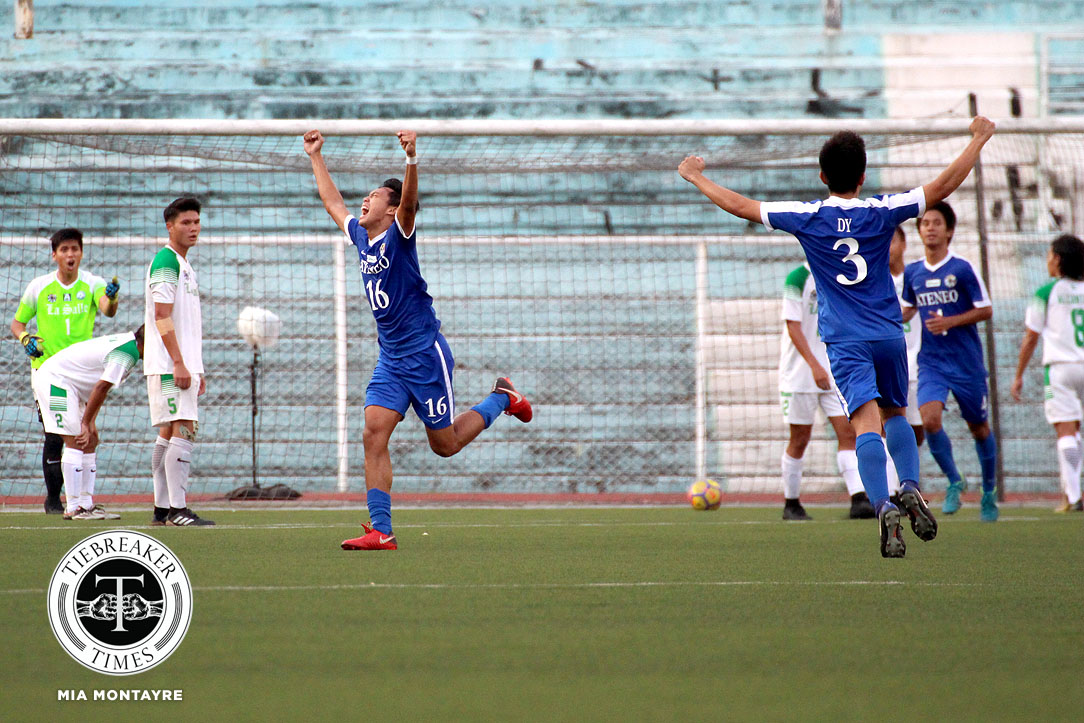 “I never lose. I either win or learn.”

Nelson Mandela’s statement couldn’t be truer for the Ateneo de Manila University Blue Eagles, who were denied a third consecutive finals appearance in the UAAP Men’s Football tournament following a shock exit at the hands of the University of Santo Tomas Golden Booters in the semifinal round last Thursday at the Rizal Memorial Stadium.

Just last season, the Blue Eagles eliminated their counterparts from España en route to securing a title they had failed to win at the final hurdle in Season 78. There was no déjà vu for both sides this time around as the Tigers exacted revenge on the Ateneans via an extra time winner converted by Conrado Dimacali.

After the match, instrumental players Jarvey Gayoso and Enzo Ceniza took time to offer their thoughts after being neutralized by the determined UST team coached by Marjo Allado. In their team’s first 14 games, the duo have dealt huge damage to their opponents. Gayoso netted 15 goals in the whole of the elimination round, while Ceniza made the potent Ateneo frontline tick by running plays in midfield.

For both of them, and most of their teammates, this was the first time they didn’t reach the final. Some players experienced the defeat to University of the Philippines in Season 78, while a few got to experience winning the championship in the first attempt when the Blue Eagles won it all a season after. 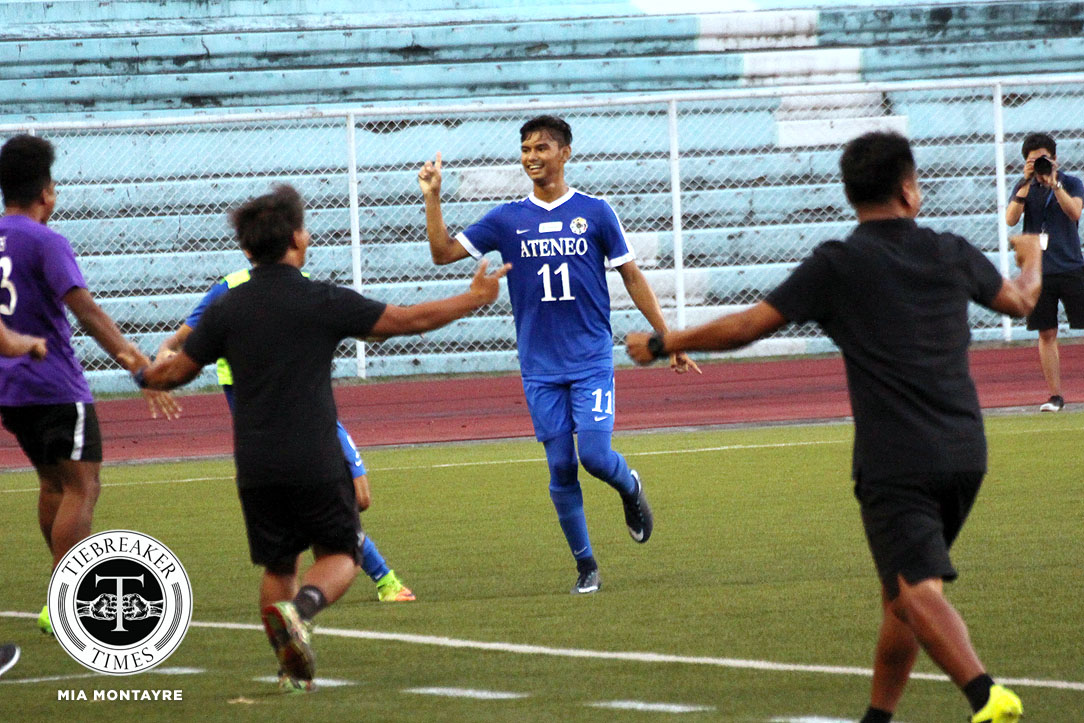 As Ateneo faced a semifinal exit since 2015, Gayoso believed that the setback could only benefit their development as players. He, for one, cited a couple of aspects of his game that still need vast improvement. One of them is playing better with his weak foot.

“I know everybody expects me to be lethal on my left foot so my right foot has to be at least more threatening to them,” the leading scorer of UAAP Season 80 admitted.

One of the most difficult to mark in the competition, Gayoso had tormented opposing defenses with his quickness and killer instinct in front of goal. Yet for 120 minutes on a hot Thursday afternoon, the left-footed striker couldn’t break the Tigers’ resolve.

“Full credit to UST. They defended me well, they saw the movement that I’d make in the game,” Gayoso stated after absorbing his first loss in the UAAP men’s football tournament semifinal.

A team they had eliminated in the same stage last season, UST simply did not want to fall once again to the Ateneans, and as far as Gayoso is concerned, it clearly showed over the course of the game.

“They really wanted it, they were very eager to get back at us from last year’s semi-finals match and I guess they had a bigger heart, that’s why they got it,” he uttered.

Personally, Gayoso felt he could have done so much more. He believes that the occasion called for a strong mentality which he thought he didn’t possess in the fateful encounter with UST.

“My mentality towards the game wasn’t the best today and I believe that’s something I should really work hard to improve on.

“I’m on my third year already and I know I should be more of an example and more of an inspiration to those who are younger and those who are less experienced than me in the team,” a disappointed Gayoso summed up.

#ReadMore  Buddin continues to prove worth to NU-Sta. Elena 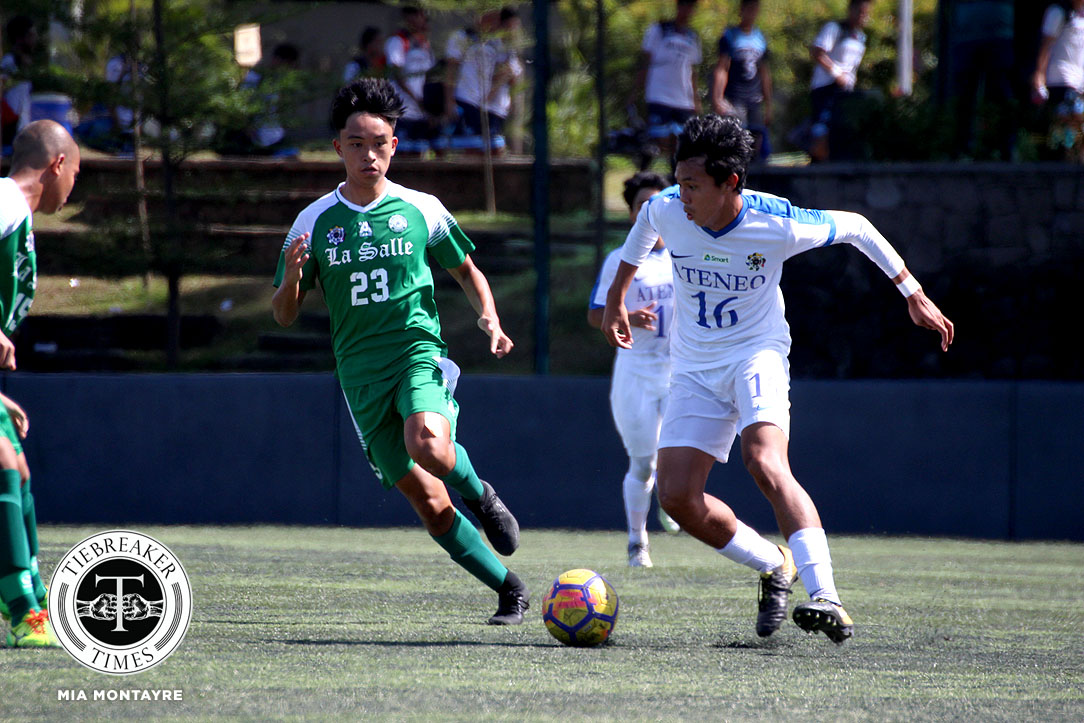 Playing a few meters behind Gayoso, Ceniza is also one player that the Tigers were able to limit. A key presence in the Ateneo midfield, the sophomore had a difficult time against UST. Voicing disappointment following their failure to defend the crown at least until the final game of the season, the Cebuano simply attributed their shortcomings to one important aspect of their game.

“Ever since ‘yung championship namin, [especially] during the preseason, parang we were so cocky. Then later in the season, that’s when we started to adjust which should not be the case. Discipline will play a really big factor to bounce back next season,” the 19 year-old pointed out.

Already looking forward to next year, the futures of the two players look a little different. Gayoso, who still has two years of eligibility remaining, intends to stay put for at least another year.

“Definitely [staying]. I’m committed and I am dedicated to this school.

As for Ceniza, he may just have played his last game for Ateneo. Despite having three more years in the UAAP, he refused to rule out a potential move to the pros.

“I don’t know yet. I have to decide first,” the midfielder declared.

Having disclosed that Global had attempted to recruit him last season, the sophomore may just be encouraged to move up the ranks this early in his career. Should he do so, he’ll be joining the likes of former teammate Jordan Jarvis, Amani Aguinaldo, and Marco Casambre in moving rather quickly from the collegiate level to the professional ranks.

It’s going to be a longer postseason than what most of the beaten Ateneo Blue Eagles are used to. The UAAP men’s football tournament won’t begin for another nine months. During that span, the bitter taste of defeat would definitely sting for just a little while longer, as these two players assure that the losses of today could well lead to more triumphs come tomorrow.