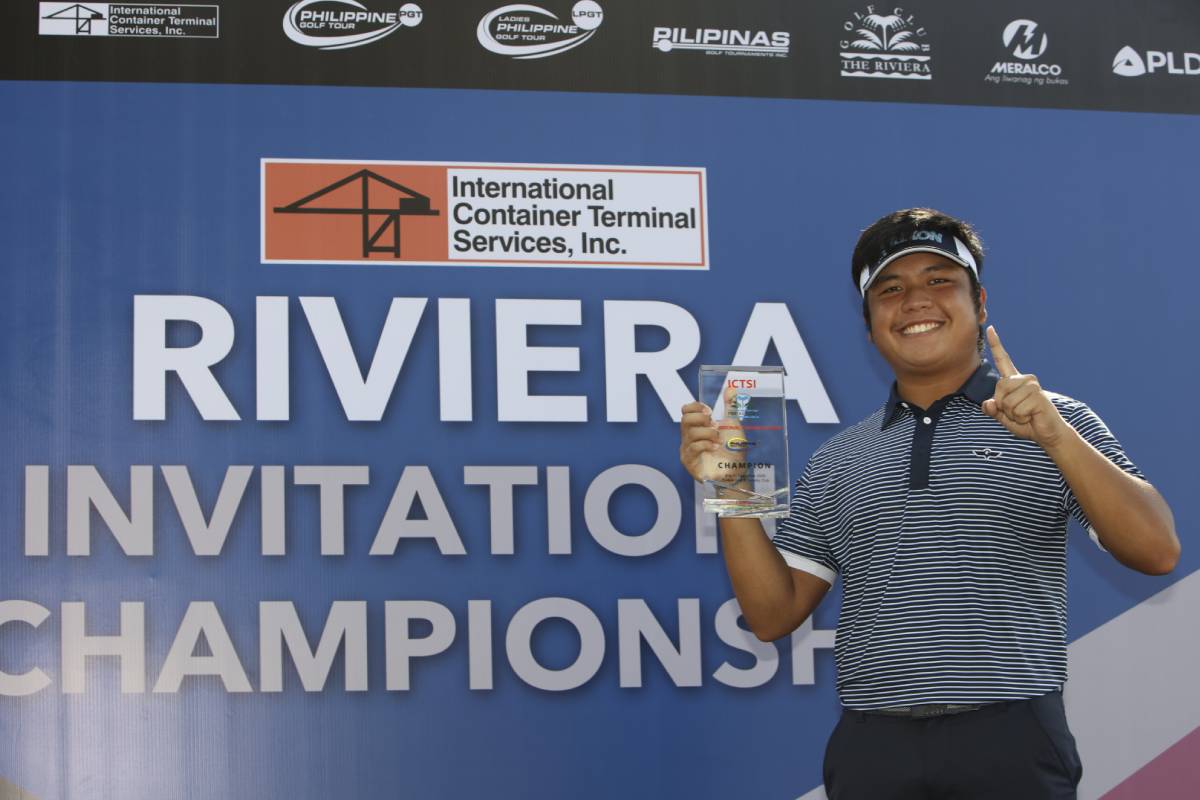 With a huge lead, Ira Alido turned the final round of the ICTSI Riviera Championship into a victory walk – cruising to a nine-stroke romp over Jobim Carlos, Nilo Salahog, and Michael Bibat despite a closing 73 at the Langer course in Silang, Cavite, on Friday.

Thanks to a solid 64 in the third round, Alido put on a performance under exacting conditions that put him in front by eight strokes over Bibat and second day leader Zanieboy Gialon.

The lead was large enough to exhaust his pursuers. Bibat and Gialon came out flat in a final round, virtually reducing things to a coronation stroll for the 19-year-old Alido.

Pressure-free, he bogeyed Nos. 3 and 4, miscues that hardly mattered. Bibat also made the turn at 37, while Gialon faded with a 40, paving the way for Alido’s unhampered roll.

He erased the stigma of his two meltdowns after leading through 54 holes in a young pro career, including in PGT Asia at Wack Wack last year.

Alido assembled a seven-under 277 to complete one of the Tour’s most lopsided wins. It more than doubled Tony Lascuña’s four-shot triumph over him and Rupert Zaragosa in the first of two PGT bubble tournaments in the ICTSI Riviera Invitational Challenge at the Couples course – the less daunting of the two Riviera championship courses – three weeks ago.

But after firing back-to-back 70s at the par-71 Langer layout and trailing by just one-off Gialon, Alido knew he had a chance.

So did the majority of the rest. Unlike them, however, Alido – who turned in five Top 10 finishes to finish No. 6 in the Order of Merit last season – cashed in on his fine form and stamina. He produced a brilliant 64 on Thursday, which he used as a springboard to a career breakthrough worth P337,500.

Angelo Que sizzled with a 67 in the opener of the P2.5 million championship put up by ICTSI, but struggled with 73 and 74 to drop out of the race. This time, he wound up with another three-over card for solo seventh at 288.

On the other hand, Gialon – who sparkled with a 65 Wednesday to wrest control – skied to a 77. He ended up tied for eighth at 289 with Sean Talmadge and Korean Park Jun Sung, who shot 72 and 75, respectively.

Like Lascuña, Miguel Tabuena rallied with a day’s best 67 on five birdies against a bogey. He saved a joint 11th place finish at 291 with American Lexus Keoninh and Justin Quiban, who made 75 and 78, respectively.

But the last two days simply belonged to Alido, who barged into the pro circuit in 2018 with a lot of promise. Though he squandered two third-round leads, he gained much from those setbacks, using them as motivation to get better and tougher.

He persevered during the long Covid-19 break, staying fit and in shape through home practice. He did admit, though, that it is different being on the range or fairways where he could hit balls and gauge his progress as a player.

With the organizing Pilipinas Golf Tournaments, Inc. getting the nod from the Games and Amusements Board to stage more tournaments next year following its successful conduct of the twin tournaments under strict health and safety protocols, Alido would be more than ready to go for another crack, in better, stronger form – and this time, coming off a rousing triumph.