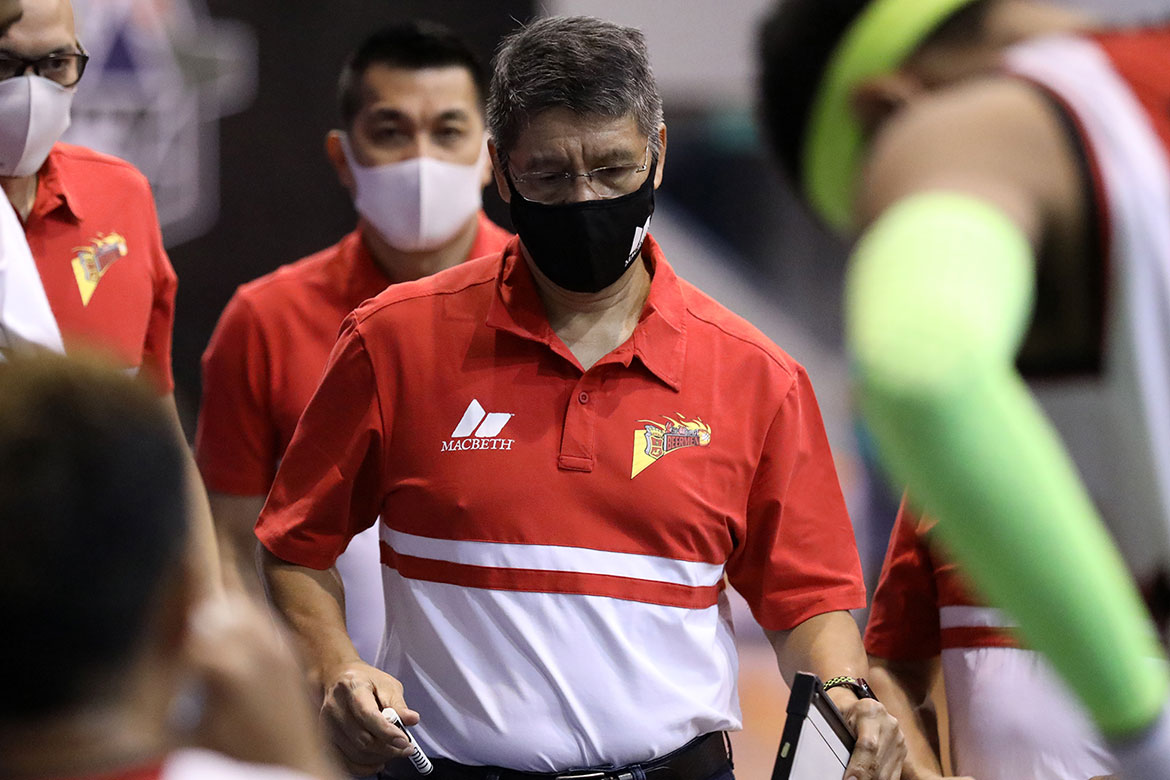 That is how San Miguel head coach Leo Austria described the Beermen’s core amidst all the talk that it is high time for a revamp following the end of their unprecedented five-year reign as Philippine Cup kings last season.

The four-time Coach of the Year told Tiebreaker Vodcasts’ Coaches Unfiltered, presented by SMART, that he has been hearing this clamor for years. He remains firm, though, that there is no need to break up his celebrated nucleus.

“Regarding the comments of the fans, I think that was three or more years ago pa eh,” said Austria. “If you still remember 2019, we had a chance to win a grand slam. Unfortunately, we were eliminated in the third conference.

“Those are with the players na talagang from the first championship… What I mean is ‘yung core namin, still competitive,” he added, referring to June Mar Fajardo, Arwind Santos, Marcio Lassiter, Alex Cabagnot, and Chris Ross.

The mighty Beermen vied for a Grand Slam in 2019 after winning both the Philippine Cup and Commissioner’s Cup crowns, only to receive the boot in the Governors’ Cup quarterfinals.

All eyes were then on the league’s winningest team to see how it would bounce back. But it suffered a major blow prior to the 2020 wars when reigning six-time MVP Fajardo broke his shin in practice. The team later declared him out for the season.

Still, San Miguel showed much promise even without the catalyst of its dynastic success. It thrashed long-time rivals Magnolia Hotshots through a 94-78 decision in the Season 45 opener last March 8.

“Our first game is really superb for our players,” Austria recalled. “It built a lot of confidence in our team because they want to prove that we can still win a championship without June Mar. And it’s very evident in our first game.”

Unfortunately, San Miguel could not sustain its winning ways. The COVID-19 pandemic began hitting the country at that time, and the PBA decided to suspend activities until further notice – just days after opening shop.

What was initially a weeks-long halt to the season turned into months. It took nearly eight months before the league resumed play, albeit in a bubble setup mounted at the Clark Freeport Zone in Pampanga.

Austria admitted that the long pause took its toll on his players. “Unfortunately pandemic kasi, na-disrupt eh. Everybody was very hesitant about what to do, what to plan at the time. And it affected us a lot,” he said.

That showed in their first two games in the bubble. They lost to Rain or Shine no thanks to a late Rey Nambatac trey, before suffering a harsh 88-107 beatdown in the hands of eventual runners-up TNT three nights later.

It was a gut-wrenching loss to the Tropang Giga, to say the least. In that game, Terrence Romeo dislocated his shoulder, eventually leading to his exit from the bubble – and the season – the next day.

At that point, San Miguel was already without three of its key players: Fajardo, Romeo, and versatile winger Matt Ganuelas-Rosser, who opted not to join San Miguel in the bubble, citing personal reasons.

SMB still racked up wins despite their predicament, eventually earning a Top 4 finish entering the playoffs. But it could not get rid of the injury bug, and members of its championship core were the ones suffering.

Do-it-all guard Chris Ross played through a banged-up knee and an injured thumb. Resident sniper Marcio Lassiter, then playmaker Alex Cabagnot both got hurt as well prior to the postseason.

With all that, their rule of the most prestigious conference saw its bitter end. They lost twice at the hands of Meralco, who were mentored by the one who steered San Miguel to the 1989 Grand Slam – Norman Black.

For Austria, the lack of support for his main men was a reason behind the downfall of a reign that put the Fajardo-led Beermen in the discussion of being the greatest all-Filipino crew ever assembled.

“The problem is there’s no backup at that time,” he said. “What I mean is we cannot sustain the output of our core – Romeo is out, June Mar is out, we don’t have Rosser.

“But kung nandoon lang sila, I think it will be a different story.”

Austria believes that his squad could be even more competitive if they have one or two players to support his core, in line with what he offered last November when San Miguel left the bubble after losing to the Bolts.

And that, apparently, has been addressed. On Friday, reports circulated that San Miguel would trade Ganuelas-Rosser, Russel Escoto, Gelo Alolino, and a 2021 first-round pick to Terrafirma in exchange for CJ Perez.

The trade has not yet received approval, but if ever it does, then SMB will have itself yet another young star that could further boost its guard play that features Ross, Cabagnot, Romeo, and shooter Von Pessumal.

“If we will be given one or two players to support our core, still, we will be competitive, especially if June Mar will be back next season,” said Austria.

“It will be a different story for us.”