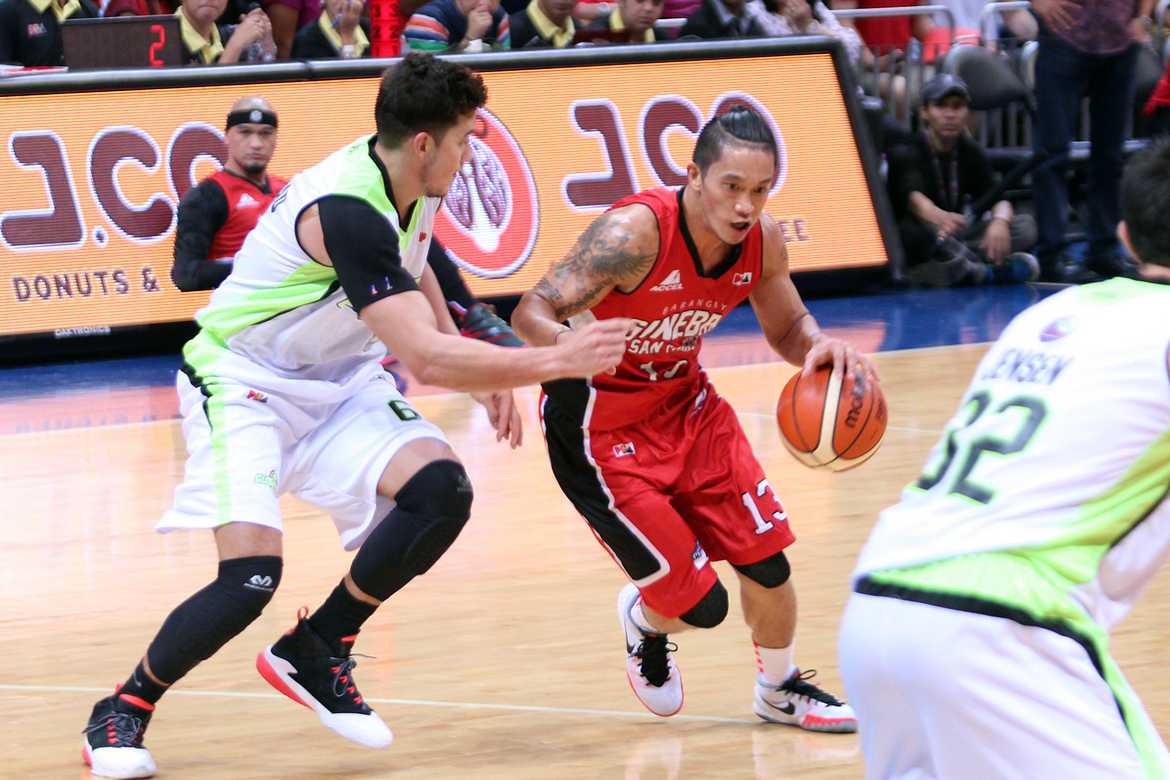 With Barangay Ginebra already up by a huge margin against the San Miguel Beermen Sunday night at the Smart-Araneta Coliseum, the fans inside the jam-packed venue began chanting “Jay-jay!”, trying to convince Ginebra to field in veteran guard Jayjay Helterbrand.

Head coach Tim Cone was reluctant at first, but left the final decision to Helterbrand, who told his mentor he was willing to play even if it just for a few minutes.

“I think it does not matter how old we get, we are always going to want to go out there and compete. He asked me if I want to play and I said I want to play. It’s just, we just want to be a part of the team and contribute even if it is just little minutes,” Helterbrand said.

The 39-year-old guard missed his only field goal try in less than two minutes of play, but he does not mind that at all. What matters for Helterbrand is being able to give the team’s fans even more joy while he still can.

“Definitely, the fans are always inspiring us. Just having them show up and support us, we are definitely thankful. Especially today, they were really our sixth man and they gave us the energy to beat a tough San Miguel team,” he said. “Just go out there and play and have fun. We just try to enjoy it while we are still out there and still able to play ball.”

The last two minutes of the game also saw Mark Caguioa re-enter the floor just to join his fellow veteran guard Helterbrand, sending the crowd into a massive hysteria.

“It always feels good (to play with him),” Helterbrand said of his long-time Ginebra backcourt partner. “It is how we started our careers and hopefully we can end on that note. I miss playing with that guy. I miss the competitions together, but we are leaving Ginebra in good hands. These guys can build from it and get confidence each game.”

The heart and soul of the franchise for about two decades now, the Helterbrand-Caguioa duo has led Ginebra to four titles. Each guard has won a Most Valuable Player award, and have combined for 16 all-star appearances.

Asked if Helterbrand plans on extending his career, he admitted he thought has not crossed his mind yet.

“I don’t know,” the 16-year veteran said. “We will see what happens after the conference. We just take it conference by conference. I am not going to say I am going to play for two more years (or something like that).”

What Helterbrand is sure of is to give the squad’s legions of fans something extra to get excited about, as long as he is still glued to the game.

UP, FEU cancel each other out in thrilling stalemate

Global squeaks past JP Voltes to barge into the semifinals