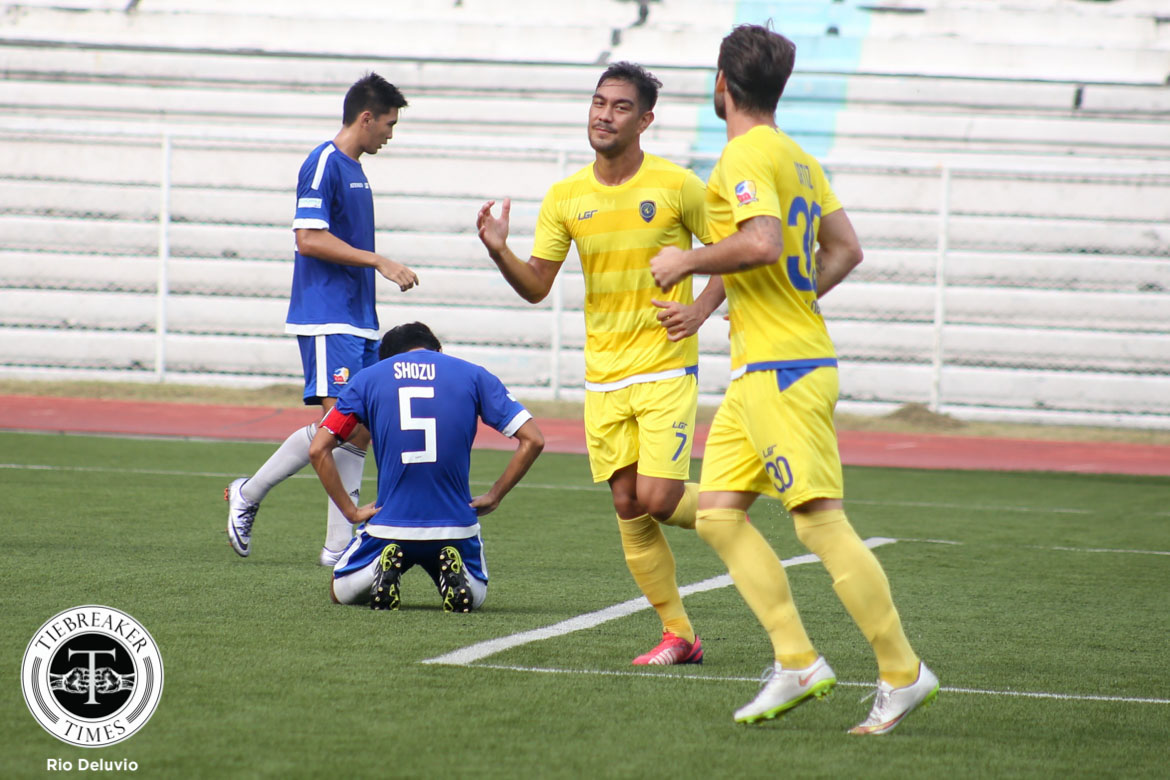 The former AFC President’s Cup participants stamped their class early in the match despite Team Captain Misagh Bahadoran sitting out. Global FC, however, had newbie Juan Carlos Ortiz to provide the firepower on the attack along with Omid Nazari and Hikaru Minegishi.

After an initial scare by UAAP Season 77 Rookie of the Year and Agila midfielder Julian Roxas in the ninth minute, the yellow-shirts piled up the pressure. And Global did not wait long for the breakthrough goal.

Seconds after that Roxas attempt, Ortiz registered his first goal of the match by heading Ivan Petrovic’s cross into the goal. Global swiftly doubled this lead as Charley Pettys nodded another delivery from Petrovic four minutes after the go-ahead goal.

Jeremiah Rocha and Roxas came close of pulling one back for the white-shirts, but Nick O’Donnell denied these chances with heads-up goalkeeping.

Crosses and passes came from all over the place for Global, but they could not find the last touch. Agila’s defense also did enough to stifle these attempts until the last minute of the first period.

Finally, after unlocking the white-shirts’ resistance, the home side got their third of the afternoon courtesy of Ortiz’ brace. The Spaniard striker took it from close range and there was nothing James could do to stop the shot.

The second half was the same story with Global controlling the pace, leaving Agila to scour for scraps. Despite numerous saves and clearances from the white-shirts, the People’s Club maintained their composure and patient build up. Nazari only took three minutes from the restart to net his second of the match. The former Iran “B” national team player also headed one past substitute keeper Enrique Ortiz, finishing off a Jerry Barbaso assist.

In an ensuing play, Barbaso himself drove all the way from the back and towards the Agila goal. Konan Koffi, however, stopped the former Azkal and was called for a foul inside the box. On the consequent penalty at the hour-mark, first-goal assister Petrovic calmly sent the ball into the bottom corner to push the lead to 5-0.

Global fielded in new players to inject some energy, only they were not able to break down Agila’s highly defensive approach. In the 75th minute, Azkal Amani Aguinaldo, who was subbed in to play up top, almost scored with another header, but it went over the bar.

Eight minutes from this near-chance, the yellow-shirts finally got their seventh goal. Aguinaldo this time sent a lovely forward pass to Minegishi, who dove in for another header.

Getting into his groove up front, Aguinaldo once more received a pass in the 89th minute inside the box. Agila skipper Shinji Shozu and Aguinaldo battled for the ball, but the former was called for the foul and, consequently, conceded a penalty kick.

Global’s Ortiz took the spot kick and was denied by the post. Fortunately, the other Ortiz, Agila’s custodian, went off his line even before the striker touched the ball. The three-time goal scorer would not be denied on the second try as he capped off his wonderful game with his fourth of the match. That sealed Global’s eighth straight win and their return to the top of the standings.

Striker Paolo Salenga believed they did well enough to carve the victory, but felt they could have done better. When asked about their hurried offense in some stretches of the match, he said, “Yup, siguro kaya parang atat, gusto namin umiscore ng marami kanina para makahabol kami sa goal difference.” Despite leading the League after the win, the team knows, as Salenga shared, that they need to put in more effort on their team work in the next few games.

The League leaders Global FC will go for the ninth consecutive win against the unpredictable Green Archers United FC on Sunday, July 10 at 4pm. Agila MSA FC will look to bounce back when they battle Stallion earlier in the day at 7:30pm.