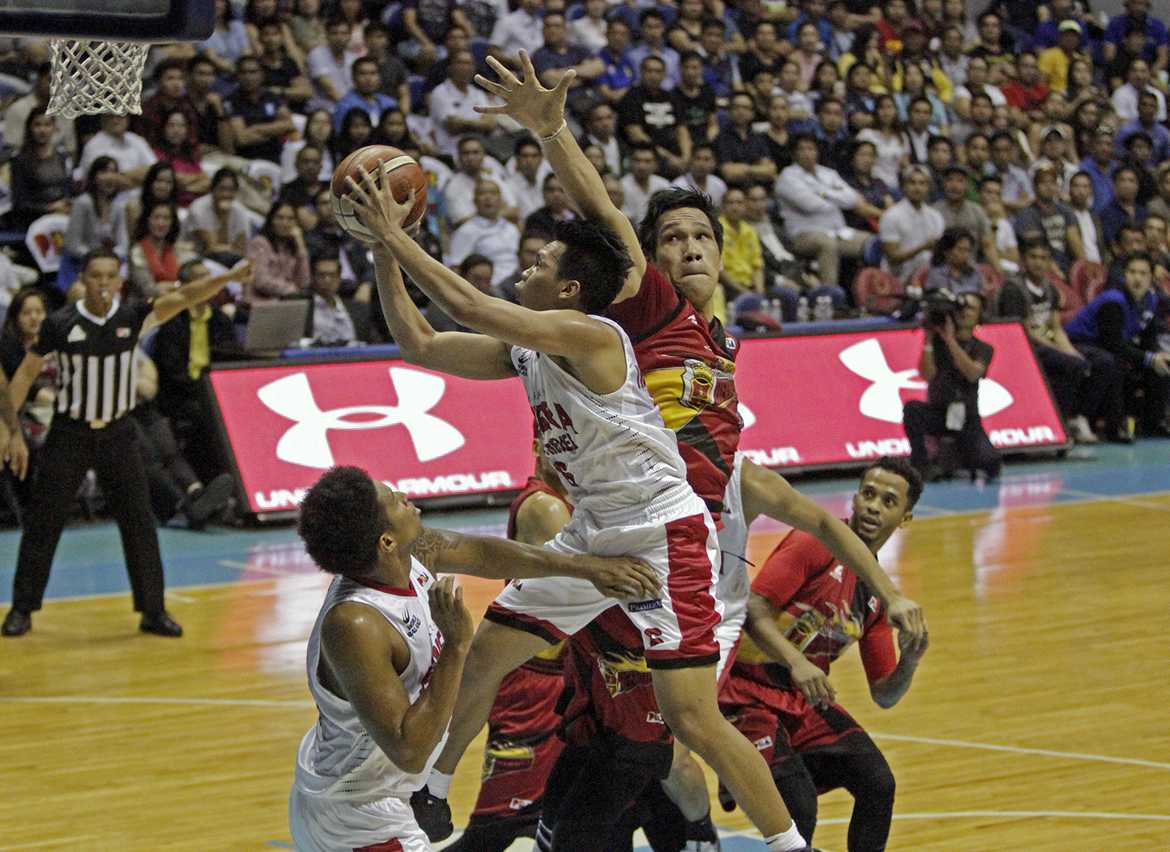 After three years of not experiencing a finals, Ginebra is finally back in the final stage of a conference.

It had to go the distance, but at the end of five games, the Barangay Ginebra San Miguel have successfully dethroned the San Miguel Beermen, 117-92, in a blowout Tuesday evening at the Smart Araneta Coliseum.

In a crowd 20,374 strong, Ginebra had to weather a see-saw battle in the first half, highlighted by a rapid exchange of three pointers and unbelievable scoring runs.

Behind seven triples in the first quarter, Ginebra rallied to a blazing start and left the Beermen in the dust. However, despite leading by as much as 25 during the first half at 37-12, the Kings had to face SMB’s major threats during the game.

Marcio Lassiter, Arwind Santos, and Chris Ross led the Beermen in an astonishing 24-0 blast to claw their back to a point, 37-36. Unfortunately for the defending champs, this would be their lone hurrah, as Ginebra started their counterattack by re-establishing a seven-point cushion at intermission.

The third quarter went entirely the way of Ginebra behind an offensive spurt from import Justin Brownlee, who alone outscored the Beermen in the period, 16-15. Their defense also centered around clobbering June Mar Fajardo, and everything just fell into place on the offensive end for the hungrier Ginebra team, who ended up scoring 37 points in the decisive third frame.

Brownlee finished with 26 points, 10 rebounds, and seven assists. Scottie Thompson posted a massive double-double of 24 points and 15 rebounds, including 4-for-7 shooting from three-point territory.

Arwind Santos topped the Beermen, scoring 24 points on 10-for-19 shooting, but MVP candidate June Mar Fajardo was hammered on defense and only attempted one shot from the field, as he finished with only seven points, all from the free throw line.

“We just asked our guys to come out and play aggressive. When Scottie started hitting shots, everybody also hit shots. We had a great lead but SMB being the great team they are, they came back,” coach Tim Cone said after the game. He added that this win must be celebrated quickly, as the finale will be in less than 48 hours.

“(For) 27 years I haven’t seen fans like this. Ginebra’s a different experience and we’re in the finals because of these fans. It made us kilig that we won.”

Ginebra maintained a 56 percent clip from the floor for the entire game and they also out-rebounded the Beermen, 54-46. They also had more assists, 30-20, while also dominating the points in the paint, 48-24.

Ginebra had been swept back in 2013 by the Alaska Aces. The last time the team had the title was way back in the 2008 Fiesta Conference, in which they defeated the Air21 Express in seven games.

Game One of the Best-of-seven finals series between Ginebra and the Meralco Bolts will be on Friday, 7pm at the Big Dome.