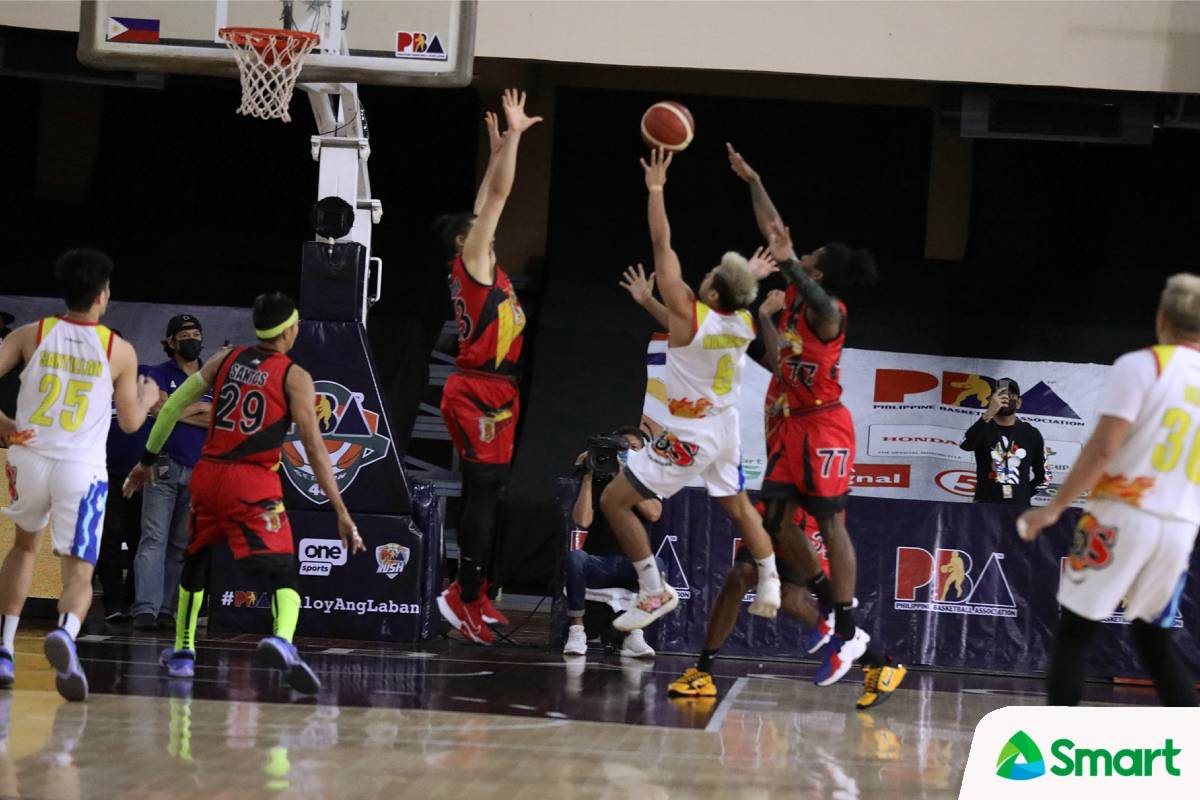 The lefty point guard out of Letran hoisted up a shot off a drive and banked it in with 2.5 ticks left as the Elasto Painters averted a meltdown after allowing the Beermen to tie the game from being down by four with less than a minute to go.

That big shot, moreover, saved the efforts of rookies Santi Santillan, Andrei Caracut, and Anton Asistio, who all showed maturity beyond their years to help their side crawl back in the second half after a sluggish start.

Nambatac went on to finish with nine points on 3-of-5 shooting, together with three assists, a rebound, and a steal in 19 minutes off the bench.

“Not at all,” said head coach Chris Gavina when asked if there was any hesitation on his part to check the guard in come winning time. “I always talk to Rey being ready to be our closer and mindset-wise, I could tell he wanted to play.

“I have no fear of getting the ball to Rey’s hands and knowing that he’ll come up with something that’s going to come out with a positive effect. With what happened, that’s exactly what happened in that play,” he added.

ROS now has its sixth win of the conference, and its second straight as it was coming off a big win over Magnolia two days ago.

“Takes us in another step towards the right direction moving towards the playoffs,” said Gavina as his side improved to 6-4 and is currently at fifth in the standings. “Still, we’re definitely a work in progress.”

Santillan top-scored for Rain or Shine with a career-high 21 points, nine of which he made the in third quarter that saw him give his team a 69-66 lead with 31.5 seconds on the clock following a three-point play conversion.

The fifth overall pick went on to hit big shot after big shot in the final chapter. As SMB got the lead behind Mo Tautuaa, he responded with a triple to put the Elasto Painters back up, 81-79, with 7:47 to go.

Fellow neophytes Caracut and Asistio then helped out in keeping the distance. About a couple of minutes after the former’s trey, the latter made a three-point play to widen their lead to five with 3:02 remaining.

That, until their battle-tested counterparts slowly chipped away the deficit to eventually tie the game up at 93-all following CJ Perez’s lay-up off a steal from Asistio near the halfcourt with 12.5 seconds left to play.

But then, Nambatac came up with the biggest shot of the game. SMB had one last try but Marcio Lassiter was not able to pull the trigger on time.

“Our players preach consistency and discipline today and these guys showed a great deal of effort, heart, and determination to pull out wins,” Gavina said.

Javee Mocon made 18 points and 12 rebounds for RoS, as Asistio chimed in 11 points and seven assists off the bench.

San Miguel was led by Terrence Romeo with 20 points on 17 shots in the loss that snapped their two-game winning streak.

Arwind Santos had 18 points and 12 rebounds. Perez finished with 18 as well, while Lassiter added 11 as the Beermen dropped to 5-3.