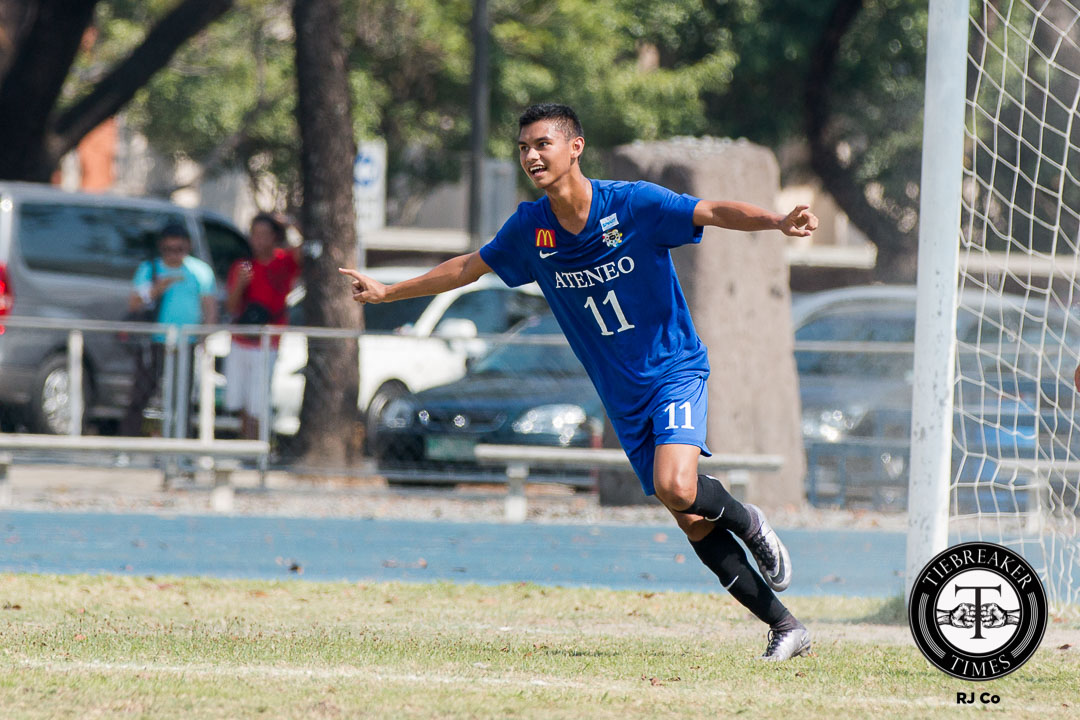 Javier Ocampo Gayoso continues to fuel the second round surge of the Ateneo de Manila University Blue Eagles as he provided the touch that gave his team an all-important 1-0 victory over archrivals De La Salle University Green Archers Thursday afternoon at the Moro Lorenzo Football Field.

The rookie tucked the ball in at the 16th minute as he was nicely set up by Masyu Yoshioka. The Japanese midfielder broke away from the La Salle defense by meeting a clever through ball made by Carlo Liay along the right flank. Yoshioka attracted the attention of the La Salle defense, prompting him to locate the unmarked Gayoso inside the box. Last year’s top Blue Eaglet then rounded past La Salle goalkeeper Paeng de Guzman for him to easily shoot the ball from around 12 yards.

It was a sucker punch for the Green Archers who controlled proceedings in the first 15 minutes of the encounter. The Lasallians played possession football nicely, often forcing the hosts to play behind the ball. Nonetheless, their dominance wasn’t reflected at all as they only registered one shot in that period. Eight minutes into the game, Greggy Yang met Nicko Villacin’s cross but he couldn’t hit the target with his header.

After absorbing the La Salle attacking barrage quite well, the Ateneans began to exploit La Salle’s high line. At the 15th minute, the visitors were warned when Yoshioka had space inside the box. He was clean through on goal but Villacin made a good challenge to prevent Ateneo from seizing the initiative. It was an encouraging sign for the Eagles, who then took the lead a minute later through Gayoso’s calm finish.

#ReadMore  UP beats UE to clinch maiden win in Season 78

Falling behind, the Green Archers played more eagerly with the aim of responding right away. Four minutes after Gayoso’s goal, Jojo Borromeo teamed up with Gelo Diamante in breaking up the organized Ateneo defense. The pass was there for Borromeo, but he wasn’t able to retain possession inside the box. He fell down instead to a challenge the referee deemed clean enough not to award a spotkick in favor of La Salle.

The Lasallians’ determination to pull one back was reflected by their desire to pressure Ateneo in the attacking third. While it gave them more time with the ball, it also left them exposed to Ateneo’s counter attacks. Yoshioka was played through by a clearance but the provider of Gayoso’s goal was flagged rightly for offside. That was the closest Ateneo got to padding their lead as they devoted their energy in fending off the Green Archers.

It proved to be successful as they limited the visitors’ to shoot from outside, such as the case when Rigoberto Joseph opted to fire a decent shot that forced a reaction stop from Ateneo keeper Kenneth James. The rookie custodian also had to react to Gelo Diamante’s rebound which he also kept out seven minutes before halftime. That was the best chance DLSU came up with as the first half ended with the Blue Eagles holding a 1-0 lead.

Unlike in the first half, the Blue Eagles moved more aggressively to start the second period. The Eagles played with the ball longer and were looking likely to score the next goal. Liay spearheaded the Blue Eagles by striking twice in the first 15 minutes of the half, although both of his efforts were off target.

Down the other end, the Green Archers weren’t having plenty of opportunities but nearly pulled one back three minutes after the hour mark courtesy of the elder Diamante. The captain managed to get a touch on Jose Montelibano’s low cross but he sent it inches wide, hitting the side netting instead.

As time winded down, the Blue Eagles looked more confident in seeing the game out. They were holding the Green Archers while also creating chances on their own.  At the 72nd minute mark, Gayoso threaded a fine cross towards Julian Roxas who could only guide the ball over the crossbar. Ten minutes after, a mistimed clearance by de Guzman nearly compounded La Salle’s misery but no Blue Eagle was able to steer the ball into the empty net.

While the Ateneans failed to put the game to bed on the other end, James was able to hold the fort for Ateneo. His routine stops down the stretch ensured Ateneo’s first win over La Salle since Season 75. At the same time, the Blue Eagles leapfrogged the Green Archers to third place as they are now tied on points with FEU, who own a superior goal difference. The Lasallians still have a game in hand and are behind by just a point to those two teams.

After the game, Ateneo coach JP Merida expressed slight frustration with the team’s performance; yet, the mentor believes that the team was able to accomplish the most important thing in their plan. “So far naman, ang importante ngayon is to get the three points so I’m happy sa result,” Merida stated. He cited the team’s defensive performance as the integral factor in the win as it frustrated their attack-minded opponents throughout the game. Merida deems it to be a statement, saying, “We need to prove to everyone na we’re not inconsistent. They proved it na kaya naman nila.”

By winning their last two games against FEU and DLSU, the Blue Eagles are moving closer towards a return to the Final Four. Should they win against NU, Ateneo will be guaranteed of a place in the semifinals. Aware of it, Merida chose to downplay his team’s chances and emphasized the importance of staying focused against the already-eliminated NU Bulldogs this Sunday. “Hindi pa rin namin iniisip na safe kami sa Final Four. Same pa rin ‘yung goal–to get three points. ‘Yung three points hindi makukuha kung hindi magpeperform,” he stressed.

The Ateneo-NU game this Sunday will kick off at 5:30 PM, just after La Salle’s game against the Adamson Soaring Falcons which will start at 3:00 PM. The Green Archers will hope to bounce back against an upset-conscious Adamson team that held UST in their last outing.