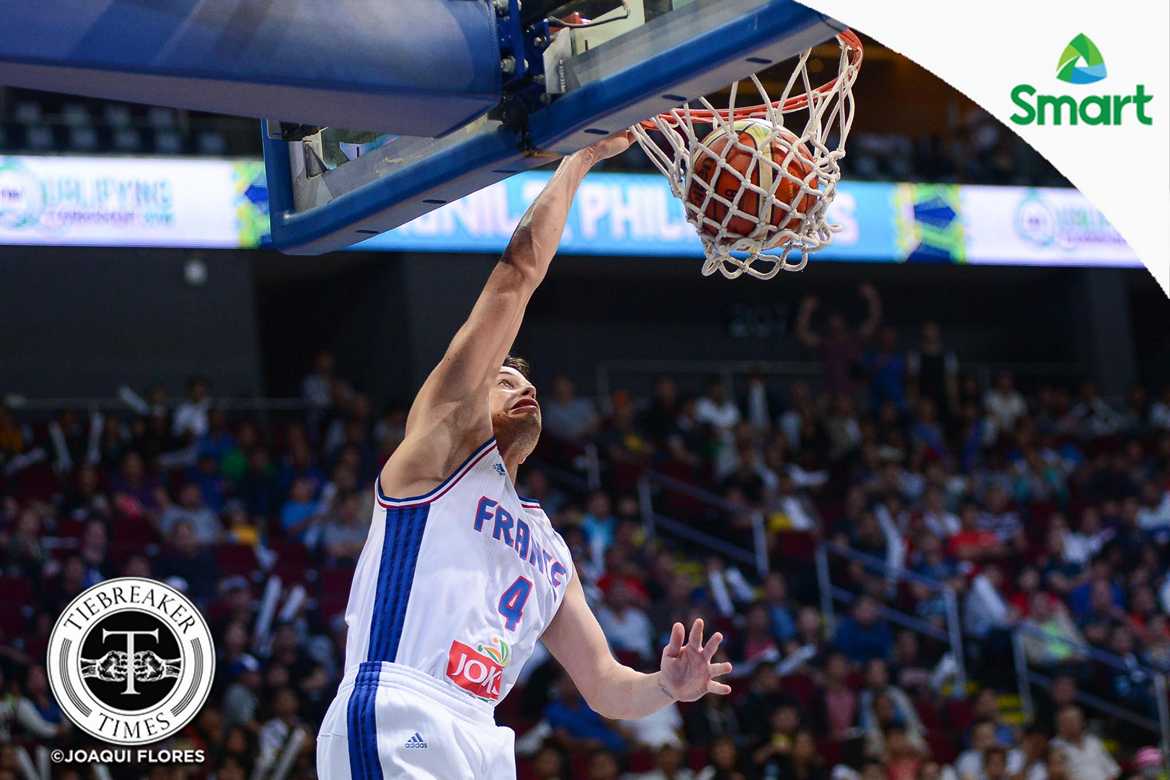 And it’s down to just two squads!

The French men’s national basketball team, the Les Bleus, soundly defeated the 12 Tall Men of Turkey, 75-63, to set up a Manila OQT Final date with Canada Saturday evening at the SM Mall of Asia Arena in Pasay City.

“We showed our character just like two days ago. We won and it’s the most important thing,” Heurtel said after smoke had cleared.

With Nic Batum finally suiting up for the first time for France in this tournament, the Les Blues paraded an all-NBA starting five.

The Turks, though, were unfazed after seeing the lineup in starting on a 13-3 blitz. Despite a slow start highlighted by four early miscues, the veteran-laden French squad were able to rally, scoring 13 straight points – eight coming from Nando De Colo.

France played a smaller lineup in the second frame, which the Turks took advantage by pounding the ball inside. However, Thomas Heurtel was able to ignite France’s counter from the perimeter to help the French build a 31-25 advantage. The Group B leaders produced nine first-half assists that helped yield their biggest lead of the opening half, 9, on a De Colo layup.

Ali Muhammed’s initial three-ball to start the second half was responded to by ten straight points by France. In a blink of an eye, Boris Diaw and Joffrey Lauvergne combined for a blistering counter-punch that separated their team from Turkey, 47-33.

Just like in yesterday’s outing against New Zealand, the French bench that led the way for the team in the fourth quarter. Heurtel scored nine in the opening surge to lead his team to successive buckets and open an 11-3 blast in the final frame. Ender Arslan converted a four-point play on the other end to try and save his country’s Olympic hopes as Turkey melted the lead to ten, from as high as 18, after a basket by Semih Erden.

With 3:30 left, Heurtel stopped the bleeding with another basket. After an exchange of buckets, Birkan Batuk made a layup in transition to slice the deficit down to eight. Unfortunately, time was not on Turkey’s side, and Boris Diaw’s reinsertion helped France restore order en route to booking their seat in the OQT Final.

France made four more three-pointers against Turkey’s dismal 3-for-20 shooting from beyond the arc. While Turkey had more rebounds, 33-29, they also committed more turnovers, 16-13, and shot only 42 percent against France’s 52 percent clip from the field.

As for Turkey, Asik played his best game of the entire OQT with 19 points, five rebounds, on 8-for-11 shooting. Erden and Muhammad had 11 apiece.