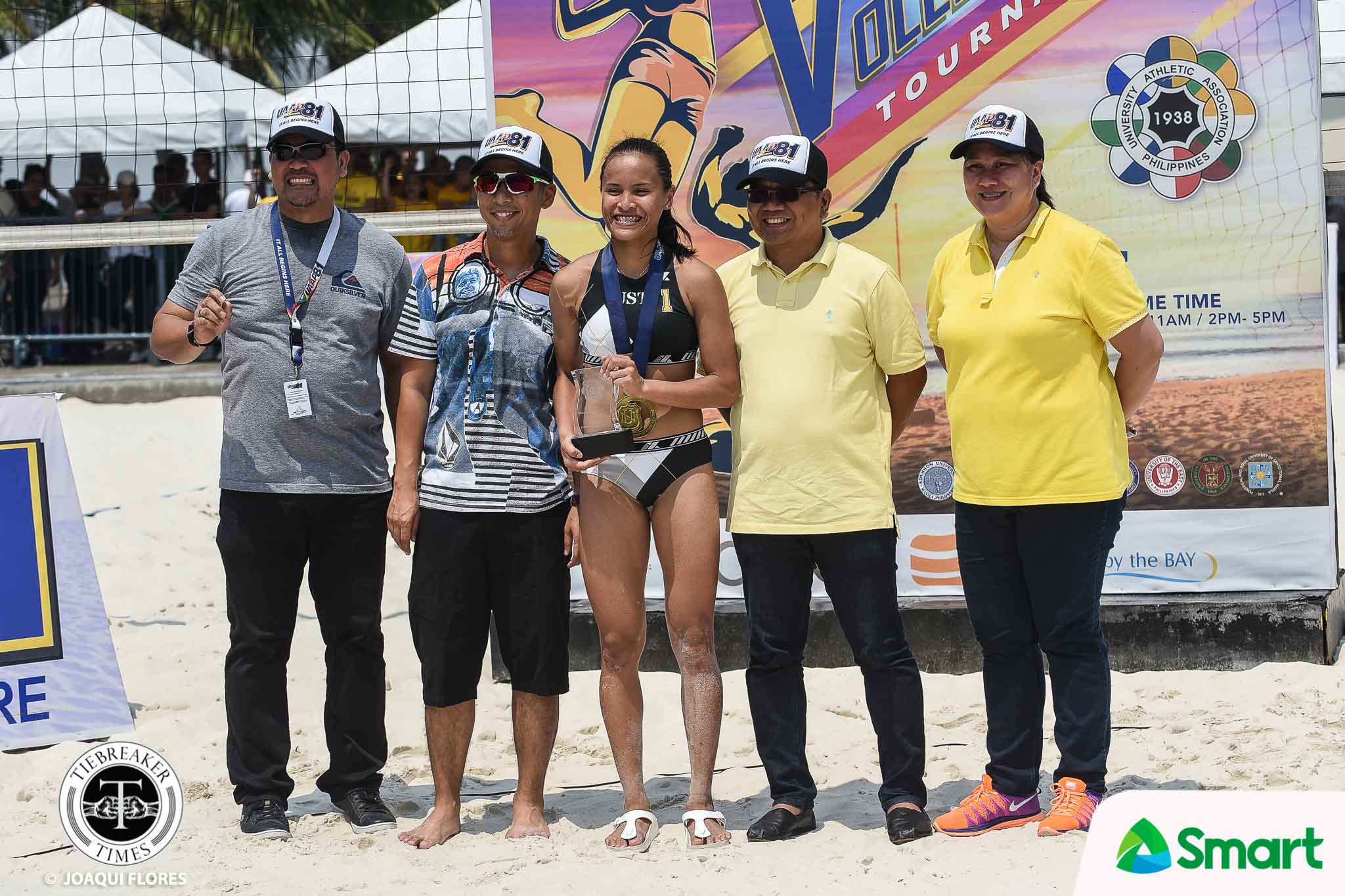 Sisi Rondina stared down a veteran pair of La Salle Lady Spikers across the court. The Tigresses were finally sitting at championship point after a grueling Finals series that saw her succumb to dehydration in one match.

But Rondina firmly received the serve, then took a quick glance at the other side of the net.

Rondina exploded, leaving a cloud of gray sand from where she leapt. The Cebuana tracked down Rivera’s set and bombed a hit between Kim Fajardo and Cyd Demecillo.

Even before the whistle sounded, Rondina was already in tears, hugging Rivera and everyone that came near her. In the barren University of the East-Caloocan campus with only a few media members and her teammates huddled in a sandcourt in the middle of a grass field, Rondina celebrated her first UAAP championship.

Four years later, Rondina was staring down another veteran pair of Lady Spikers across the net. The Tigresses were finally sitting at championship point after one of the most lopsided tournaments in UAAP history.

Since Day One of UAAP Season 81 Women’s Beach Volleyball Tournament, Rondina and rookie partner Babylove Barbon lifting the title was more of an inevitability than a possibility.

Leading 20-16 against Michelle Morente and Tin Tiamzon in the second set of Game Two of the Finals, Rondina and Barbon hadn’t lost a set the entire tournament.

Barbon served, targeting Michelle Morente, who lofted a hit which Rondina easily read and picked off. Taking a quick scan of the La Salle side, Rondina gently ascended. Her chiseled torso leaned heavily towards her right, threatening the La Salle defense with a ferocious cross-court attack. At the last second, Rondina held back, opening her right palm and guiding a hit just above Tiamzon’s outstretched arms.

The referee blew the season’s final whistle, as Rondina had scored her final point in the UAAP Beach Volleyball tournament.

Unlike seasons past, there was barely any celebration from Rondina. She gave Barbon a hug, a tap on the back of the head, and a short whisper.

In the middle of the Sands SM By the Bay court; with a good hundred UST supporters filling the rafters; with the UST Yellow Jackets’ drumming intensifying the noontime heat, Rondina was business as usual.

Another day on the sand, another record shattered.

Rondina finished her UAAP beach volley career with four titles and four MVP awards, the most any beach athlete had compiled. She also notched a lifetime 40-6 record, going undefeated on back-to-back years in Season 80 and 81.

Her nonchalant demeanor in her final match, however, was not brought about by the ease with which she won the last two championships.

In Rondina’s incredibly tough life where she has had to prove herself everywhere she went, no win has ever been guaranteed. She simply knew that, whatever happened today, it was her last time playing beach volleyball for her beloved UST.

So she spent almost the entire Saturday evening crying, reaching out to her coaches and teammates for emotional support.

Rondina will always be remembered for her fiery, carefree attitude. Her ‘Wala akong pake sa sinasabi ng ibang tao’ carries more weight than when other players say the same thing.

But Season 81 saw a much more mature Rondina. The years of competing in the PSL, BVR, UAAP indoor, and even international beach tournaments has brought out a calm confidence in Rondina. However calm she might have become, Rondina’s powerful spikes and jittery speed have not been tempered.

Beyond her skill and demeanor, Rondina’s best trait has to be her stamina. Few players can boast competing in both indoor and beach volleyball consistently throughout five playing years. In fact, Barbon was Rondina’s fourth partner with Rivera playing in Season 77 and 78, Jem Gutierrez in 79, and Catilyn Viray in 80.

“First year pa lang ako, hindi naman must, pero for me to prove myself na kayo ko,” said the native of 5-foot-6 spiker of her motivation every year.

Having won so many titles, Rondina will cherish her last UAAP championship. She dedicates this triumph to the UST community, for whom she would play 10 years, if she could.

Rondina also took pride in risking a comfortable life with her family in Cebu to try her luck in Manila. Having left Compostela as a nobody, Rondina will return as the quiet town’s pride.

The UAAP isn’t over for Rondina. She now sets her eyes on bringing back the glory to the UST Women’s Volleyball program.