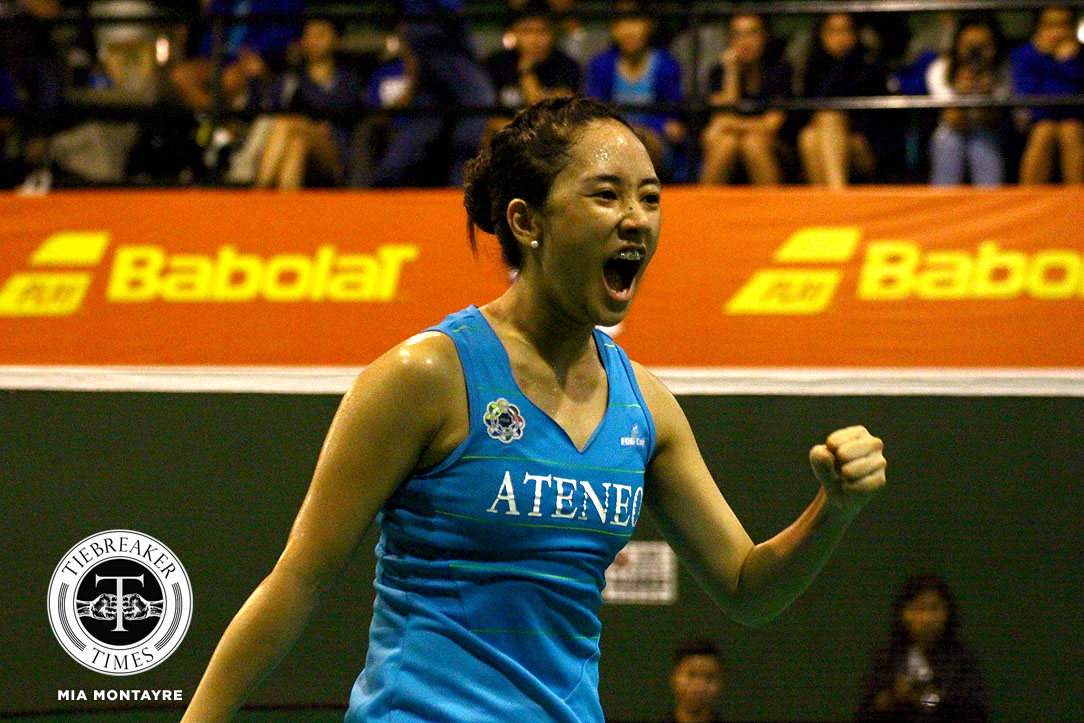 There are times when winning a championship isn’t enough to define an athlete. Champions come and go, but only few are capable of leaving an indelible mark on a sport or competition.

The UAAP has seen many teams and athletes achieve this in its storied history. The Ateneo de Manila University Blue Eagles went on to win five straight Men’s Basketball titles from 2008 to 2012, while the Adamson University Lady Falcons recently got their seventh consecutive softball crown last March 2017.

In terms of individual athletes, Ateneo swimmer Jessie Lacuna and De La Salle University table tennis star Yan Lariba not only brought glory to their respective schools — they also represented the Philippines in the 2016 Rio Olympics.

One student-athlete who deserves as much esteem as those legendary teams and individuals is Ateneo Women’s Badminton Team star Maria Ysabel Bianca Carlos.

The St. Paul College of Pasig alumna racked up one gold medal, three silvers, and one bronze finish in five playing years alongside individual gongs.

Perhaps what’s most noteworthy about her, though, is the fact that she has never lost a singles bout in her entire UAAP career.

Suiting Up for the Blue and White

The Interdisciplinary Student shared that the National University had been interested in getting her services before she entered college back in 2013. Former NU coach Jojo Mance tried to talk Carlos into joining the Lady Bulldogs, but Carlos already knew where she wanted to go.

While the blue chip recruit had no problems adjusting in terms of the sport, she admitted that the UAAP was a wholly different playground from what she was used to. “Different siya in terms of yung sa venue na yung crowd, yung cheering at team event siya. When I play outside of Ateneo, it’s just me. Singles or doubles, hindi siya team event. Yung tournament sa labas it’s just you lang eh, unlike sa UAAP na you’re bringing your whole team and your whole school.”

It turned out to be a glorious Season 76 for Ateneo and Carlos. The Lady Eagles swept both the elimination round and the Finals series against De La Salle to defend their crown, while Carlos was deemed Rookie of the Year and Most Valuable Player that year.

Season 76 turned out to be the only UAAP title won by Carlos in her Ateneo stint. Ateneo endured three bridesmaid finishes from seasons 77 to 79 at the hands of three-peat champions University of the Philippines, while the recently concluded Season 80 saw the Lady Eagles fall to eventual winners Lady Archers in the semi-finals.

Amidst Ateneo’s consistent podium finishes, though, was the Interdisciplinary Studies student’s spotless singles record. It was as if the Katipunan school was guaranteed one win in every tie because Carlos always delivered.

While her coaches never pushed her to go unbeaten, Carlos received her marching orders to not lose a singles bout from one of the closest people in her life. “Laging sinasabi ng mom ko na basta don’t drop your singles (match) kahit ano mangyari. Don’t drop your singles. I’m really a singles player talaga eh, never a doubles player.”

That loss and her mom’s lecture proved to be a blessing in disguise for Carlos, as she has never lost in the 53 singles bouts she participated in for the Lady Eagles in the UAAP.

Down from the Hill

Now that Carlos is done in the UAAP, her main focus is completing her studies. While the veteran lamented the fact that Ateneo had failed to reclaim the crown, she admitted that perhaps it just wasn’t meant to be.

Carlos explained that she is still unsure of her future after Ateneo, but admitted that a stint in the national team or the option of competing abroad isn’t out of the question. “Siguro by next year, dun na ako mag-join ng major tournaments.”

Carlos is uncertain about what her legacy is to the Blue and White. Then again, her Season 76 championship and individual accolades, three silver finishes, one bronze medal and — most importantly — that unbeaten singles streak are more than enough to hand her recognition in Ateneo’s fabled sports history.