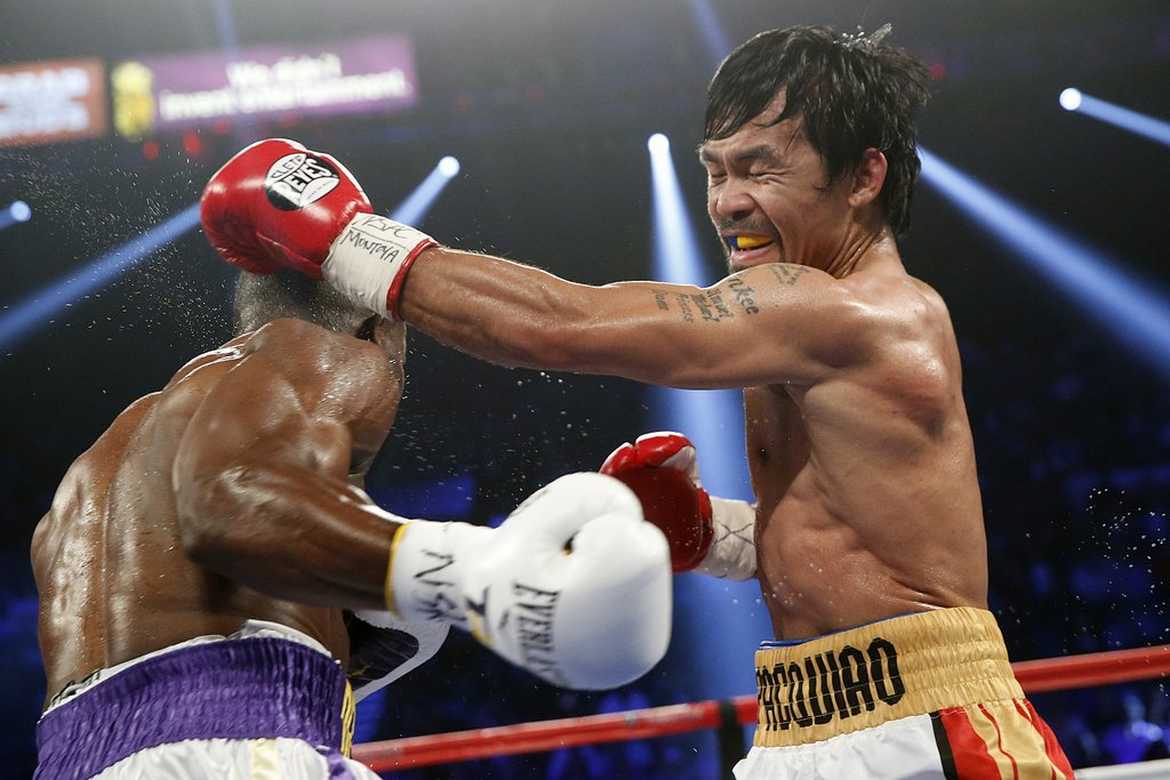 From fighting in barren gyms in Mindanao to headlining cards under the bright lights of the Las Vegas strip, all-time boxing great Manny Pacquiao has left an indelible mark in the sporting world. And for one last time he gave it his all in the squared circle.

Sunday morning in the Philippines, the Fighting Pride of the Philippines, in a throwback performance from his prime years, was able to knockdown rival and good friend Timothy Bradley Jr. in the seventh and ninth rounds en route to a dominant unanimous decision victory (116-111×3) to become the only boxer in history to win five lineal championships in different divisions. Moreover, the win ended a spectacular career on a high note.

Bradley’s counter-punching was the story in the early rounds of the fight. Desert Storm though could not string together combinations; mostly because of Pacquiao’s quick lefts. In the middle rounds, it was as if the two warriors turned back the clock as the pace of the fight turned into a blur. Both Pacquiao and Bradley went for the big shots and were thrown with bad intentions.

“He’s very quick. Very explosive and he has experience,” Bradley said about the quick step Pacquiao displayed during the fight.

After a huge build-up, Pacquiao was able to knockdown Bradley in the seventh round after a huge left followed by a crushing right. The American though was able to recover in the next round as he was able to throw three left hooks that clearly hurt Pacquiao. Pacman was saved from further harm by the bell.

Pacquiao was able to knock Bradley down hard in the ninth round that for certain turned the tides of the bout. He was able to string together a huge combination before a huge wind-up left that landed square on the face of Bradley. His opponent tumbled over to at least the other side of the ring before getting up to the referee’s eight count.

“Yeah, he caught me good on that one. He’s just very quick and very explosive,” Bradley said. “Great reflexes and it is hard to defend. Congrats to Manny.”

In a classic moment that will live in the annals of boxing history, instead of the usual touching of gloves, the two greats hugged in the middle of the ring in a sign of mutual admiration and respect to start Pacquiao’s last three minutes in the ring.

As the smoke cleared, one of the all-time greats made one last bow to his adoring audience. “This was the best of the three fights I had with Bradley,” Pacquiao said. “Great action and it was very competitive.”

“Physically I can still fight but I had already made the decision to retire.”

The decision is a vow he had made to his family and to the country he said. “I have a commitment to my family that I am going to retire after this but I don’t know,” the boxer-turned-public servant shared. “Maybe I will enjoy being a retired man and helping the people.”

UP one step closer to Final Four, ousts Tigresses