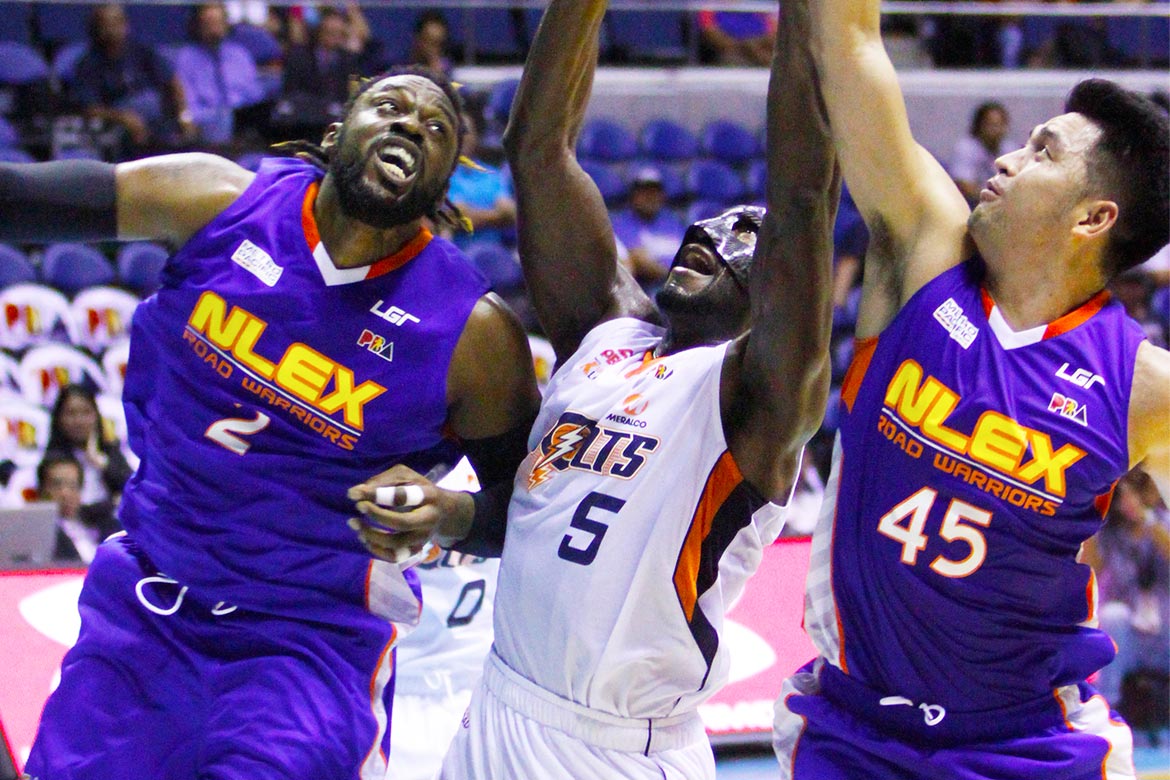 A great display of teamwork propelled the Meralco Bolts to a near wire-to-wire victory over the NLEX Road Warriors, 101-95, in the first game of the 2016 PBA Governors Cup’s Wednesday double-header at the Smart-Araneta Coliseum.

The Road Warriors kept breathing down the necks of the Bolts, but Meralco had answers every time. NLEX sliced down a lead as high as ten points late on, as they managed to tie things up at 84. However, Baser Amer scored all of his seven points on a personal run late to restore cushion.

Allen Durham led the Bolts with 31 points, 17 rebounds, and five assists in a stat-stuffing game. Durham seeks to continue this stellar team-play with the Bolts, and also play without his mask in their next match.

“I practice well with these guys. Most of the time the ball is in my hands so I also get to make plays,” he said. “The doctor said it was okay(without mask) and I’ll practice without it.”

The Bolts held the lead for majority of the game, only losing it momentarily during the first half. Meralco had 26 assists on their 37 made field goals, which pleased coach Norman Black in the win.

“All the credit goes to my players both offensively and defensively. We’re one of the leaders in assists and they displayed a lot of teamwork tonight,” Black added.

Meralco scored nine more points from the free throw area and had more rebounds than NLEX, 44-39. Moreover, the team had more points in transition at 13-5.

As for NLEX, team manager Ronald Dulatre released a statement regarding forward Mac Cardona after reports of an apparent suicide attempt the past week.

“We already transferred Macmac Cardona (on) Monday midnight to Makati Medical Center. His condition is improving, but he cannot yet accept visitors as advised by the doctors. We’ll keep you posted on this development,” Dularte said about Cardona. “The management will continue to provide whatever assistance he may need during his recovery. Meantime, let’s continue to pray for his fast recovery.”

Henry Walker led all scorers with 38 for NLEX in the loss, together with nine rebounds and five assists. Emman Monfort chipped in 12 markers for the Road Warriors.

Meralco (5-3) look to climb up further in the standings a week from now, as they next face the San Miguel Beermen (4-2). On the other hand, NLEX (3-4) will have 48 hours to rest for a showdown against the Phoenix Fuel Masters (2-4). Both games will still be played at the Big Dome.

No tomorrow for Phoenix, Tanduay