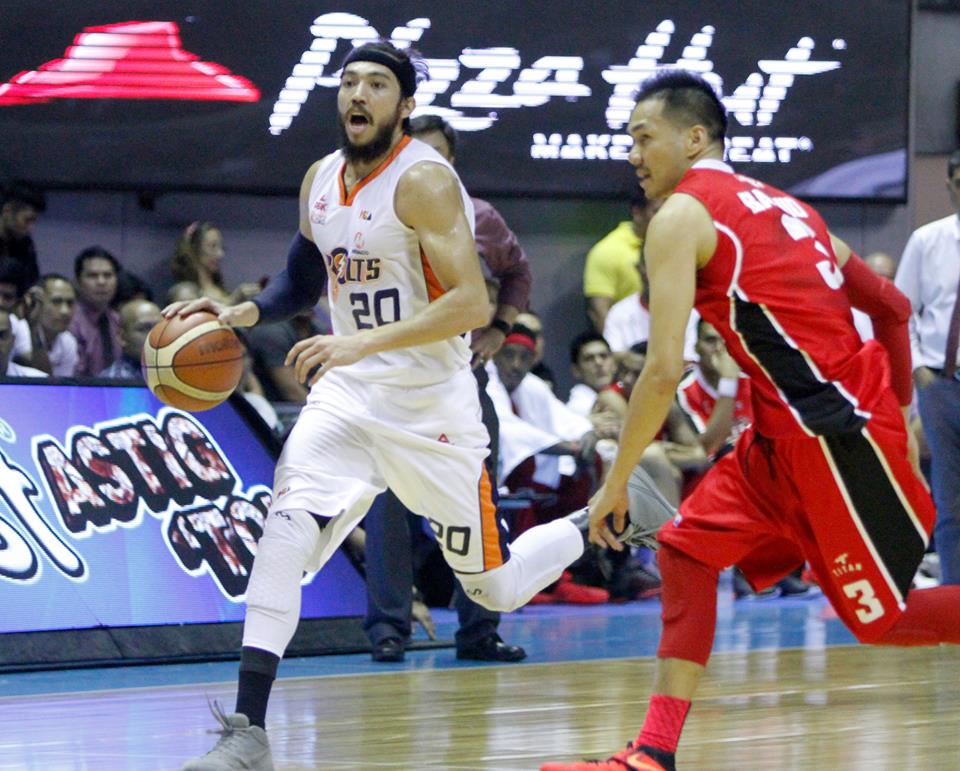 A huge fourth quarter helped the second seeded Meralco Bolts in taking a virtually must-win match against the Alaska Aces to split the first two games of their 2016 PBA Commissioners Cup semifinal series, 92-87, held at the Smart-Araneta Coliseum Wednesday evening.

It was an all-import show in the close first quarter of the match. Rob Dozier and Calvin Abueva combined for a 7-2 finish in the defensive period, which yielded a 17-14 ending in favor of the Aces.

Dozier continued his scoring spree in the second canto despite physicality taking place in the playing court. On the other end, Jarred Dillinger penciled in two triples to keep the Bolts at stiking distance. However, Alaska’s second unit troop of Tony Dela Cruz, Dondon Hontiveros and Noy Baclao each contributed jumpers that extended Alaska’s lead to double figures. At intermission, the Aces held a seven point lead.

In less than five minutes, Meralco erased six points off the lead to open the new half, as they capitalized on Alaska’s miscues. However, the Aces responded with an 8-0 counter run behind quick baskets by Cyrus Baguio and Calvin Abueva. Alaska’s smart shot selection led them to reinstall an 11-point separation, just before Meralco trimmed it to nine entering the final period.

The veteran icon Jimmy Alapag in the Bolts’ resurgence in the final period as he dished out key assists to Onuaku and Dillinger. Alaska held to a dangerously slim lead, while momentum slowly shifted to Meralco. By the five-minute mark, Meralco crawled back once again within four, 79-75, and made sure they were gonna complete the fightback.

READ  After all the drama, PBA opens 43rd season

“They showed the ability tonight to come back and win,” Meralco head coach Norman Black said as the Bolts won their first semifinals game since 2013. “That is very important.”

Alapag knocked down a pivotal three-ball, in addition to Dillinger’s basket that completed a 9-0 run and gave Meralco the advantage. In the final two minutes, Dillinger scattered two more hits from beyond-the-arc which prevented the Aces from regaining the lead. With 47 seconds left, Dozier missed an attempt that would potentially trim the lead. On the Bolts end, the crew did a good job retaining the lead en route to the tied series.

The Bolts connected on eight three-pointers in the game with the majority coming in the final frame. “That’s what we needed. We really needed to hit our outside shots to space out the floor,” Black added. “Otherwise, the defense will just collapse.”

Dillinger powered Meralco with 20 points on an excellent 50% shooting clip. Moreover, he was 5/10 from range. Newsome added 19 points and eight boards. Onuaku notched a double-double with 22 points and 14 boards.

On the other hand, Rob Dozier played 45 minutes while tallying 28 points and ten boards. The Beast added 18 points.

As a team, Meralco shot a tad better from the field in shooting at a 50% clip compared to 48% for their opponents. The Bolts though displayed better ball movement in assisting on 23 of their 35 field goals made.

Game Three of the series will be played on Friday, April 29 at the Smart-Araneta Coliseum.

Coach Hans: UAAP football is on the rise