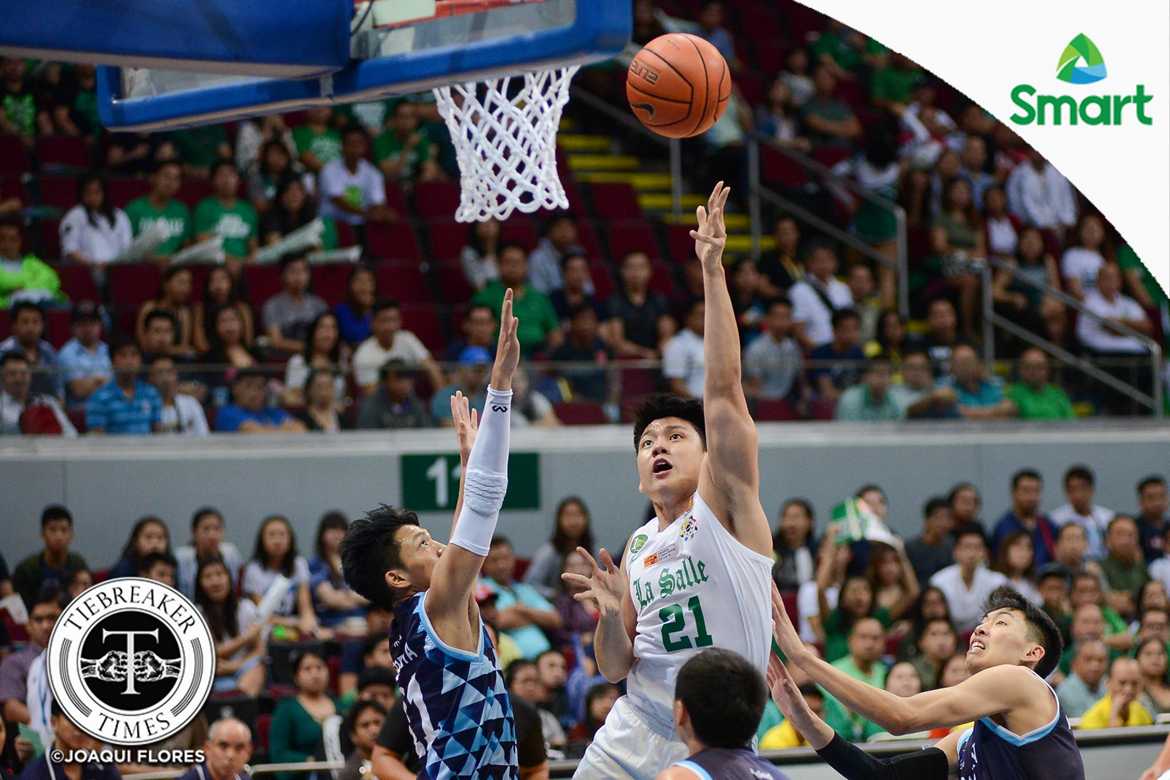 The Green Archers come marching into the Finals

After missing the finals for two straight seasons, the pre-season favorites De La Salle University Green Archers showed why experience matters at this stage of the tournament, eliminating the young Adamson University Soaring Falcons 69-64, Wednesday evening at the SM Mall of Asia Arena in Pasay City.

With their guards struggling, King Archer Jeron Teng put the Green Archers on his back, scoring 11 points in the final frame including a jumper with 2:21 left that gave La Salle a three-point cushion. Teng finished the game with 25 points on 10-of-18 shooting from the field, scoring nine of La Salle’s last 11 points..

“We just really wanted this game badly. We didn’t want it to prolong this anymore and we wanted to be in the Finals,” said Teng, who is making his second UAAP Finals appearance.

However, first-year La Salle head coach Aldin Ayo was livid with how his team played as they were forced to 26 turnovers and only had a season-low three assists in the game.

The inexperience of the Soaring Falcons though played a huge factor leading to La Salle’s win.

With La Salle up by just two points, 60-58, with 4:27 left in the game, 23-year-old rookie Robbie Manalang was called for an unsportmanlike foul after elbowing Aljun Melecio. It resulted to two free throws for the La Salle rookie followed by a basket by Teng that gave the Green Archers a six-point edge.

28 seconds later, Adamson head coach Franz Pumaren was called for technical foul for crossing the halfcourt line after a loose ball call did not go their way.

“I told them to play our game and take care of the basket. Keep on executing,” Ayo said. “Even in the third quarter and early part of the fourth we were not playing our game.”

La Salle’s guard play though continued to struggle even in the closing minutes of the game. Holding a 67-64 lead with 2:21 remaining, Adamson outrebounded the taller Green Archers from the line that gave them a chance to tie the game. However, misses by Jerrick Ahanmisi, Robbie Manalang, and Dawn Ochea from distance led to free throws for Teng with 10.1 seconds remaining that sealed the game.

For the fourth-place Adamson Falcons, Sean Manganti played his best game of the season with 13 points on 4-of-6 shooting from the field to go along with six rebounds. Floor general finished the game with 12 points but on a horrid 4-of-16 clip. Papi Sarr added 11 points and seven rebounds.

The top-seeded Green Archers now await the winner of the Ateneo Blue Eagles-FEU Tamaraws bracket. The Finals is set to begin on Saturday, December 3 at the SM Mall of Asia Arena.