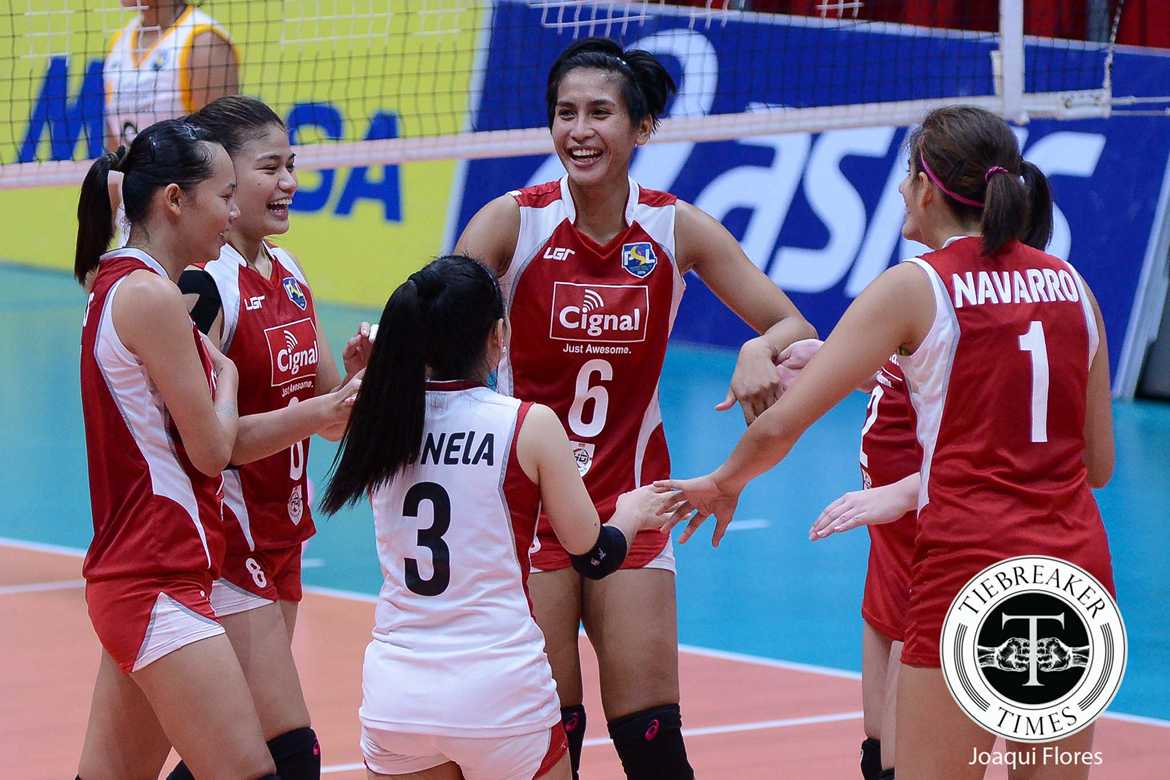 The Cignal HD Spikers are on the best streak of the conference, sweeping the Standard Insurance-Navy Lady Corvettes, 25-19, 25-19, 25-21, to advance to the fifth-place game, Saturday afternoon at the Filoil Flying V Centre in San Juan City.

Jeanette Panaga and Cherry Vivas led the HD Spikers with 13 points apiece. Both spikers had 11 kills and two blocks each.

Behind Vivas and Janine Navarro, the HD Spikers surged to an early 18-13 lead in the opening set. The lead further grew to a set-high six points, 21-15. Two attack errors by Cignal closed the gap, but a 3-0 run by Cignal capped by a Carmela Tunay kill gave Cignal the first set.

The HD Spikers continued to ride the momentum they gained in the second set, leading by as many as eight points, 23-15. Pau Soriano and Charmaine Dela Cruz tried to rally their team back, but a service error by Florence Madulid and a point by Navarro off a check ball gave Cignal another set.

Errors, however, plagued Cignal in the early parts of the third stanza, as the Lady Corvettes were able to gain a 10-5 lead. Slowly, Cignal were able to chip down the lead, eventually gaining a 21-20 lead. Navy could only manage a single point afterwards as their floor defense gave way. A service ace by Djanel Cheng closed the book on the match-up.

“Lagi ko sinasabi sa kanila na forget the past and challenge sa amin yung mga pagkatalo namin,” Acaylar shared after the win. “So, we have to face the reality na nasa Group B kami. We need to give our 120 percent to get rank one in Group B.”

“We just have to move forward.”

No Lady Corvette scored in double-figures, as Pau Soriano led the way with nine markers, six coming from attacks and two from aces.

Cignal will play their final game of the conference on Sunday, August 7. The HD Spikers will face the Generika Lifesavers at 4:00pm, with fifth place at stake. On the other hand, Standard Insurance face the listless Amy’s Spikers on the same day with the winner gaining seventh place.