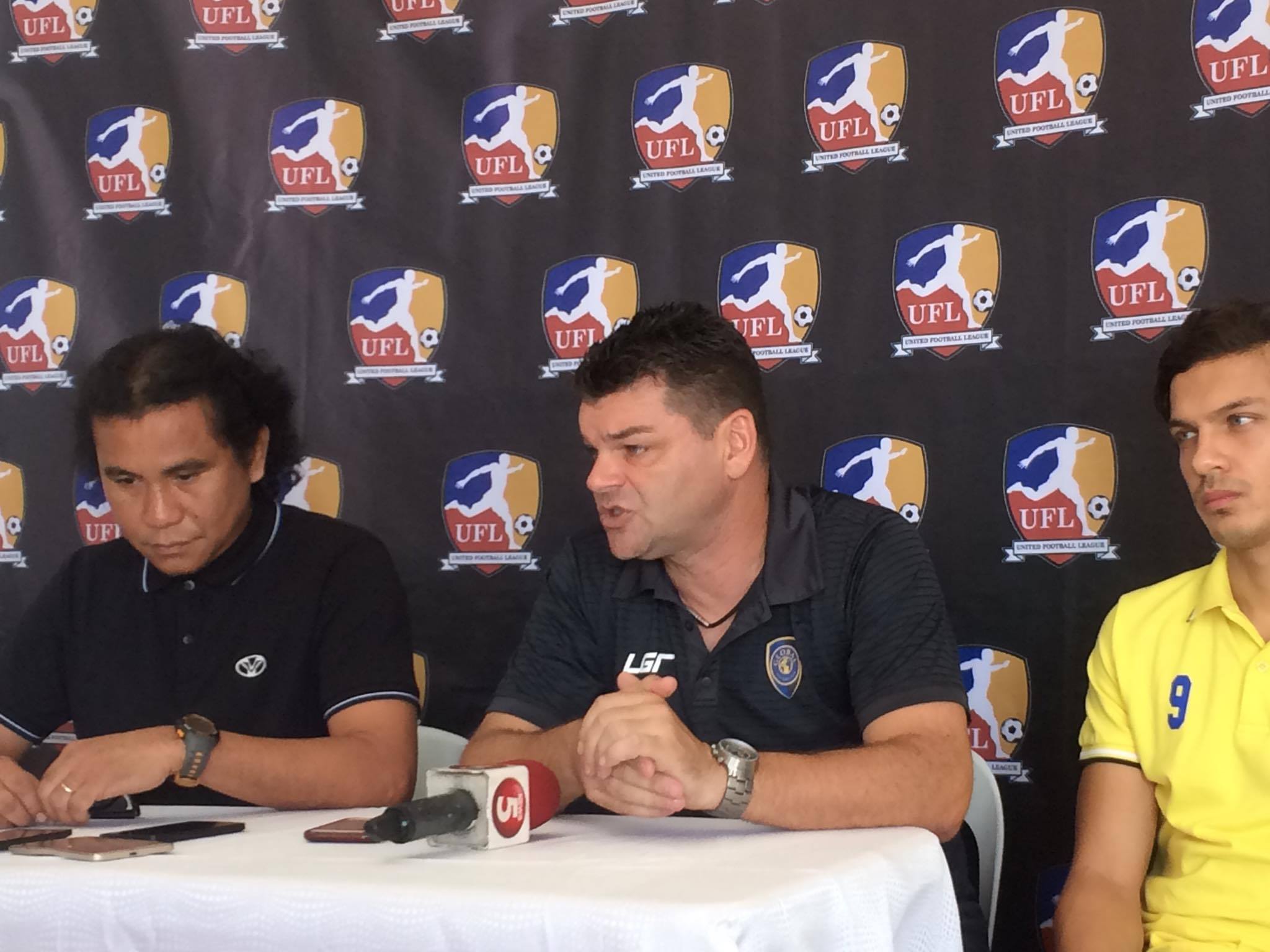 Tomorrow, two of the Philippines’ football powerhouses will collide at the Rizal Memorial Football Stadium, as Ceres-La Salle FC and Global FC take each other on for the right to win the coveted United Football League (UFL) Cup.

As the last two champions of the league, both teams will have pride at stake in tomorrow’s encounter. A renowned force in football, Global were dethroned by Ceres-La Salle last season, as the Bacolod club took the league by storm. Both teams look identical in their structure, as each team hosts a good number of Azkals in their rosters. The two teams also have winning pedigree, making each encounter an interesting and heated one — especially in a cup decider such as the one tomorrow evening.

Having the opportunity of facing Ceres-La Salle in the final is something Global coach Leigh Manson is relishing. “The motivation is we’re playing the team that we considered as our biggest rivals,” the Scottish gaffer told in the press conference held this afternoon at the UFL office in Magallanes, Makati.

Aside from toppling a big rival in Ceres-La Salle, the chance of returning to the AFC Cup is what The People’s Club is aiming for. One of the two spots given to the Philippines in the continental tournament belongs to the UFL Cup winners. For Manson, the incentives of winning a trophy and playing at a higher level should be enough motivation, as he believes that the team that wants it more tomorrow will emerge victorious.

So far, Manson has guided Global to several cup finals. His track record speaks volumes and he will be targeting to glaze it even more with glory should they lift the cup tomorrow. Throughout his still short yet productive stint with Global, Manson has declared how proud he is of the team he has, saying, “I’ve always believed in my players. I’ve never went in a game where I felt that they cannot achieve what is required of them.”

If Global want to regain their status as the kings of Philippine club football, then Ceres-La Salle definitely aspire to preserve the same billing. The Negros-based club, who were established only three years ago, has been making significant progress in the Philippine club football scene. In just two seasons, Ceres-La Salle have dominated both the now-defunct Division II and last year’s UFL Division I.

During that stretch in league football, only one club managed to set them back — Global. So for Ceres goalkeeper Michael Casas, games against the two-time UFL Champions always bring excitement to the reigning league winners. “We always look forward to play against Global because they have good players, a good team, good management. In the Philippines right now, whenever Ceres and Global play, it will be an exciting match,” he expressed, while urging fans to come and witness the two teams battle to become what he thinks will be regarded as the best club in Philippine football.

Ceres-La Salle have been playing in red-hot form in both domestic and international competitions. The Busmen only lost once in the Cup during the group stage, while they have been unblemished in the AFC Cup, recording two wins and two draws. Their lone defeat, however, came against Global, so Ceres-La Salle might be plotting sweet revenge for tomorrow.

The task of defeating Manson’s men may be easier said than done, though, as Ceres-La Salle coach Franklin Muescan is concerned with the team’s tight schedule. Nevertheless, he hopes that their current spell of good form will fuel confidence towards an important victory against Global. “I think we’re confident with our players and we’re going to the game with a positive outlook,” he stated. When asked about who has the edge, Muescan identified the importance of maximizing momentum in a game where both teams look even on paper.

Regardless of the result, Global’s Misagh Bahadoran reckons that the true winner tomorrow will be the blossoming Philippine club football scene. Ceres-La Salle and Kaya, the team the Bacolodnons relegated to the third place playoff, have been waving the Philippine flag high in Asian football. Should the two teams give their best, tomorrow’s game is something the Azkals standout thought could resonate here and in the region. “Hopefully, with the game tomorrow, we will make more football fans in the Philippines and make Asia and Southeast Asia hear about what Philippine clubs are capable of,” he wished.

Before the much-awaited match between the two Philippine club football giants, Kaya and Stallion are set to lock horns for the third place playoff game kicking off at 5:15 in the afternoon. The plate final featuring the Loyola Meralco Sparks and JP Voltes also takes place tomorrow at 2:15PM.