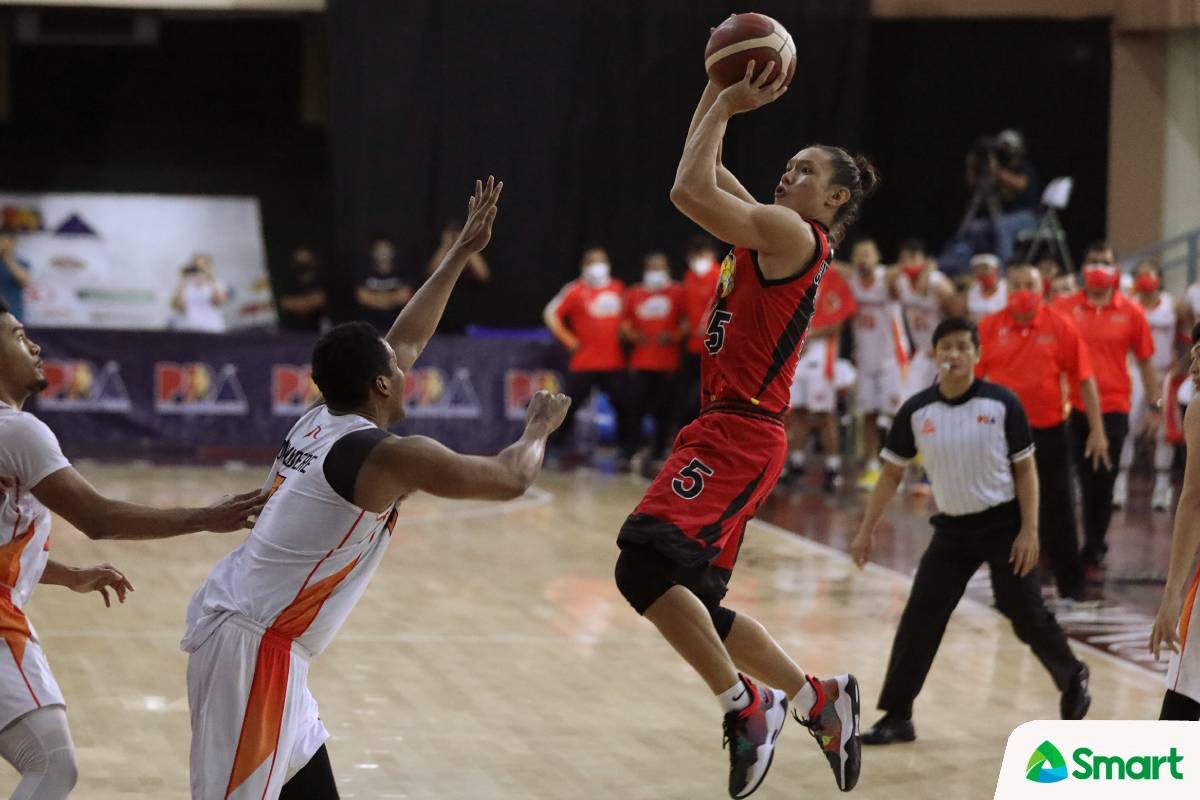 Alex Cabagnot announced his return with a bang as he towed San Miguel past NorthPort, 88-87, in Game One of their 2021 Honda PBA Philippine Cup best-of-three quarterfinal battle, Sunday evening at the DHVSU Gym in Bacolor.

In his first game back from a knee injury that caused him to miss most of the elimination round, the 38-year-old guard drained the game-winning fallaway with 1.5 seconds left as the Beermen frustrated the Batang Pier anew.

That shot put to waste the heroics of Robert Bolick, who drained a three-pointer from near the logo with 5.1 ticks to go to put the fifth-seeded team up 87-86 after being down by 11 points with less than five minutes remaining.

Cabagnot finished with a game-high 20 points on 7-of-13 shooting and three rebounds as SMB moved one win away from the semifinals.

Reigning six-time MVP June Mar Fajardo had 10 points and 11 rebounds as Arwind Santos fell just short of a double-double with nine and 11.

The Beermen appeared to pull away in the third quarter when Marcio Lassiter connected with Ross for an alley-oop play and pushed their lead to 13 points, 63-50, with about five minutes left in the period.

They maintained their lead and were actually leading by 11 with 4:25 to go in the game, until Bolick spearheaded NorthPort’s hijack attempt that saw them get ahead thanks to his long triple off Paolo Taha’s inbound throw-in.

“It’s my fault na I was not able to tell some of the players na he can shoot even from midcourt. And it’s a gamble. Talagang tumama, “ Austria said.

Bolick was then subbed out as Batang Pier head coach Pido Jarencio opted for a defensive unit inside, since all they needed was one stop to protect their lead. But then, Cabagnot was just too crafty to be contained.

Upon receiving Ross’ inbound, the lefty guard attacked the defense of Sidney Onwubere and pulled up for a jumper that dejected their foes.

NorthPort was not able to map out a proper counterattack as it had no more timeout to use. Onwubere received the ball from near the three-point line, but his shot all over the Beermen’s defense fell way short.

Austria said that they were fortunate enough to draw up a game-winning play with the 5.1 seconds they had to work with.

#ReadMore  Chot Reyes praises TNT's bench: 'We know that we are going to rely on the bench'

“Fortunately, may natira pang five seconds. It was time for us to design another play for us to get back what they did prior to that play,” he said. “And it’s a matter of familiarization with my players. We’ve been together for so long.”

Sean Anthony led NorthPort with 16 points and eight rebounds, although he suffered an ankle injury with 6:02 left in the game.

Greg Slaughter had 15 points and 10 rebounds. Bolick and Jamie Malonzo made 13 points apiece, while Taha added 10 in the defeat.

It marked the second time this season that the Batang Pier lost to SMB through a last-second shot. It bowed to the perennial contenders last July 25 in Pasig, 86-88, no thanks to a Santos jumper with 1.2 seconds left.

The Beermen will now look to finish off their opponents to return to the semis in Game Two next week.