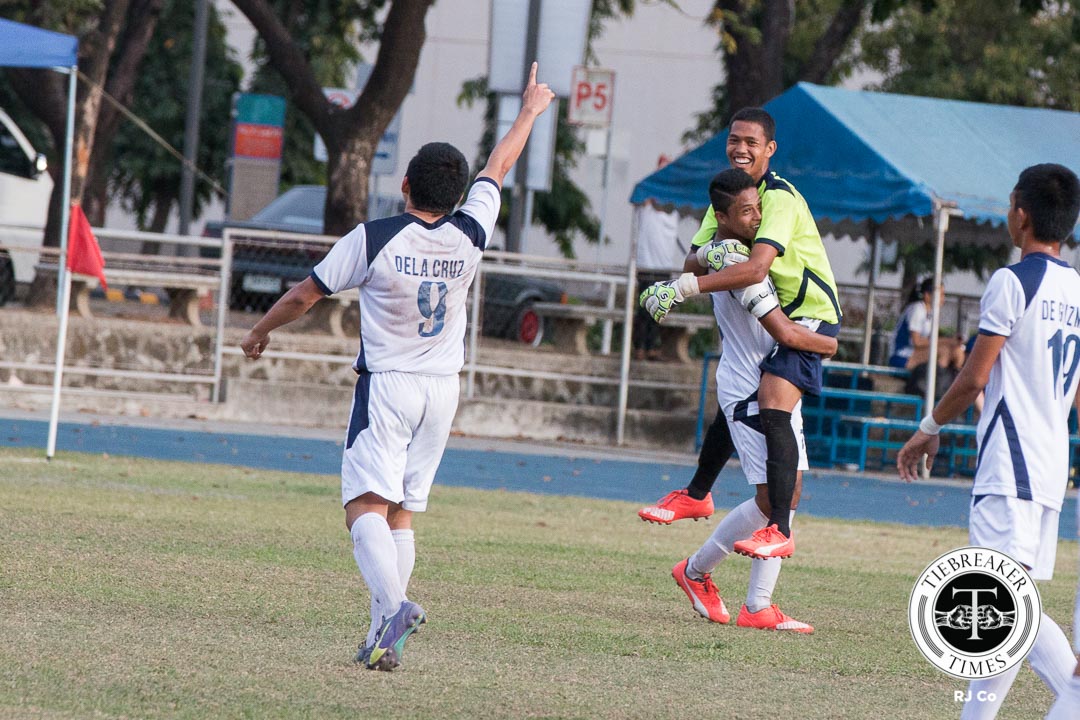 Football can be both cruel and rewarding. For example, take the match between the University of the East Red Warriors and the Adamson University Soaring Falcons in their encounter in the UAAP Season 78 Men’s Football Tournament. The two cellar-dwellers of the league were eager to finally get that maiden win.

In the end, Adamson enjoyed their big win in front of the TV cameras, while UE lamented the opportunities they wasted. The result meant more than just three points; the win was Adamson’s first since their football program was revived last Season 77. Before that, the last time Adamson participated was in Season 66.

The first half of the match exemplified the intent of both teams to get a first goal. Both teams had their chances and could have had a goal apiece by halftime. Between the two teams, it was probably UE who should have felt more frustrated after they created more chances from open play.

Regil Galaura could have had a penalty for UE at the 7th minute of the match, but the referee waved for play to continue despite his protests. Rookie Mar Diano had a chance from a corner minutes later, but his header failed to test Adamson goalkeeper Carl Viray. Perhaps their two best chances of the half came just before the break.

Good passing led to UE striker Britz Manzo running through on goal, but his shot was too weak and Viray easily thwarted him. Galaura then had a shot directed at the low post but Viray saved it.

That’s not to say Adamson didn’t attack the UE goal. Kim Bardaje was unlucky when his header from a set-piece hit the crossbar at the 16th minute. The Soaring Falcons then won multiple free kicks. Bryce Rabino’s attempt was saved by Clores, while the next two free kicks failed to test the keeper.

The halftime scoreline, 0-0, was appropriate as both teams had tried to push for a goal but sorely lacked the clinical edge.

Jo Mallen continued UE’s control of the game in the second half when he hit two chances early on. The first hit the side netting, while the second was a direct free kick that went over the bar.

The Red Warriors improved their use of possession in the second half. Allen Lacsamana mis-hit his shot when a ground cross landed in his vicinity and the chance was squandered. Bon Opeña also had an attempt of his own but Viray gathered his free kick. The Red Warriors were left to rue their wastefulness in front of goal by the end of the game

Adamson’s had a good chance in the second half from Jusuel Pilarca, when he evaded his defender but scuffed his shot from the right side of the UE box. Clores was on hand to allow the ball to go out for a goal kick.

The best came at the 88th minute of the match for Adamson. A pass from Pilarca landed with Bless Brian II Jumo, who then assisted his brother Bless Brian I Jumo for the tap-in.

UE were shell-shocked as momentum dictated that they should have won. With just a few minutes left in the clock, the Red Warriors tried to conjure up one last chance but the Soaring Falcons held on.

When the referee blew his whistle after a few minutes of stoppage time, the Soaring Falcons were ecstatic. The result was their first win this Season 78 and it meant the world for the young squad. On the other hand, desolation was etched on the Red Warriors’ faces and they stared at the grass in silence, knowing the win could have been theirs.

In terms of tactics, Manito said that he and his staff had seen to it that the Soaring Falcons’ defensive line was steady. “Pero hangga’t maaari ayoko lang ng depensa lang eh. Hangga’t maaari may atake kami.”

Manito felt his team’s eagerness to win was crucial and that he wanted to see more of the same attitude in their next games. “Siguro kailangan i-push nila sarili nila. Yung kaya pala nila so maging pursigido sila palagi sa game.”

The result leaves Adamson in seventh place while UE are stuck at eighth, with both teams separated by the three points. Next up for Adamson are the University of the Philippines on February 28. 2016 (Sunday; 7:00PM) at McKinley Hill Stadium. UE will play three hours earlier, against the De La Salle University on the same day and at the same venue.