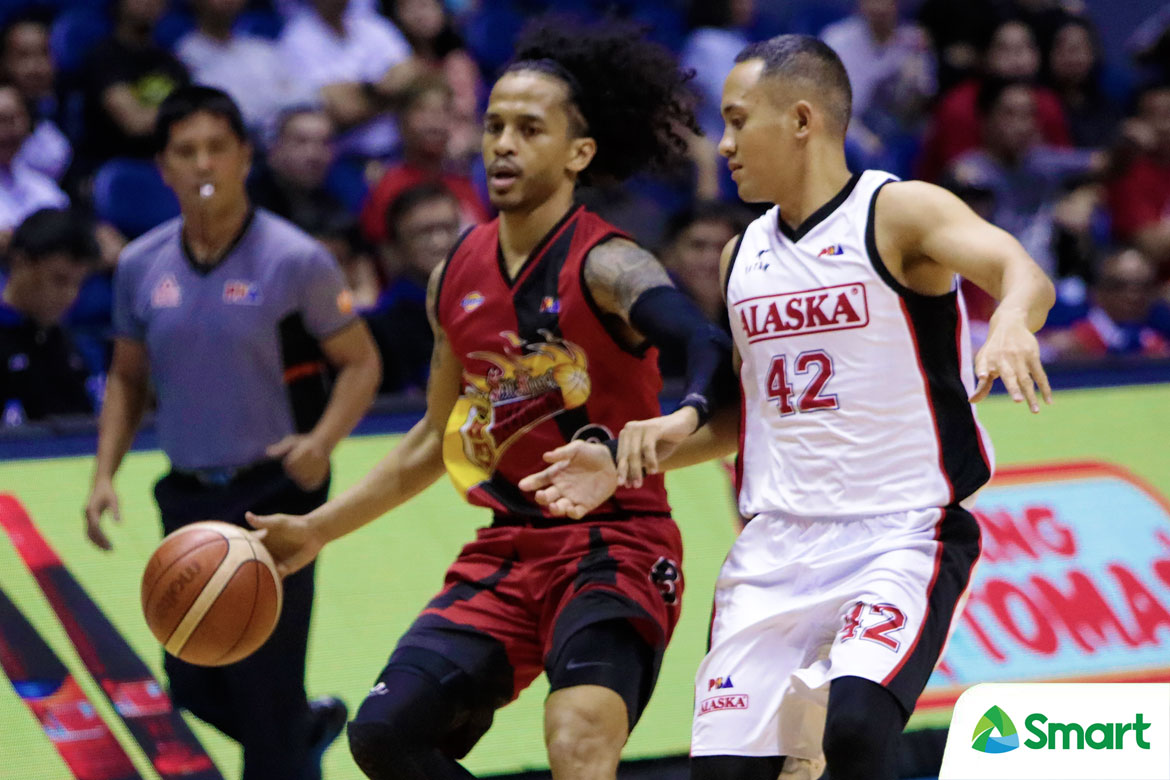 Chris Ross was all thanks for his teammates and their fluid ball movement, as the San Miguel Beermen lorded over the Alaska Aces anew to move closer to returning to the Commissioner’s Cup Finals, Monday night.

Ross was one of the instigators of San Miguel’s fightback from 16 points down in the first half, draining three consecutive three-pointers to send the match into a 54-all deadlock in the early goings of the third quarter.

The reigning Commissioner’s Cup Best Player of the Conference finished with 16 points on an excellent 6-of-8 shooting from the floor – 4-of-6 from beyond the arc – along with four assists and two rebounds in SMB’s 105-94 win.

‘We’re moving the ball and the ball is finding the open man,” pointed out the 33-year-old combo guard, whose San Miguel ended the night with 26 assists.

“It wasn’t their defense that’s leaving me open. It’s just the fact that we’re moving the ball.”

“My coaches and my teammates tell me if I open, shoot the ball and shoot with confidence and that’s what I’m doing. Lucky I was able to get a couple to fall today and hopefully, I could keep that going next game,” Ross added.

Still, Ross tipped his hat to the opposition for their gallant showing, especially at the start, even if they were undermanned – the Aces still didn’t have Calvin Abueva (suspension) and Chris Banchero (personal matters).

“They kinda changed their defense a little bit from last game. It took us a half to figure it out and we gotta give credit to Alaska,” the nine-year pro said. “They’re battling out there. They’re showing up and giving us everything we can handle.

“Kudos to those guys.”

The odds are seemingly in favor of the Beermen again, given their advantage after Monday. Expectations of a sweep on Wednesday have sky-rocketed, but for Ross, it is definitely easier said than done.

“They say the hardest game is the first one and the closeout game, especially against Alaska,” admitted  Ross. “They’re well-coached, the type of players they have in their team, their import. It’s really gonna be tough to close those guys out.

“They will just not lay down give us the game. We’ve gotta go out there and play harder than we did today. We gotta get ourselves going tomorrow and make some adjustments and come out ready to play on Wednesday.“