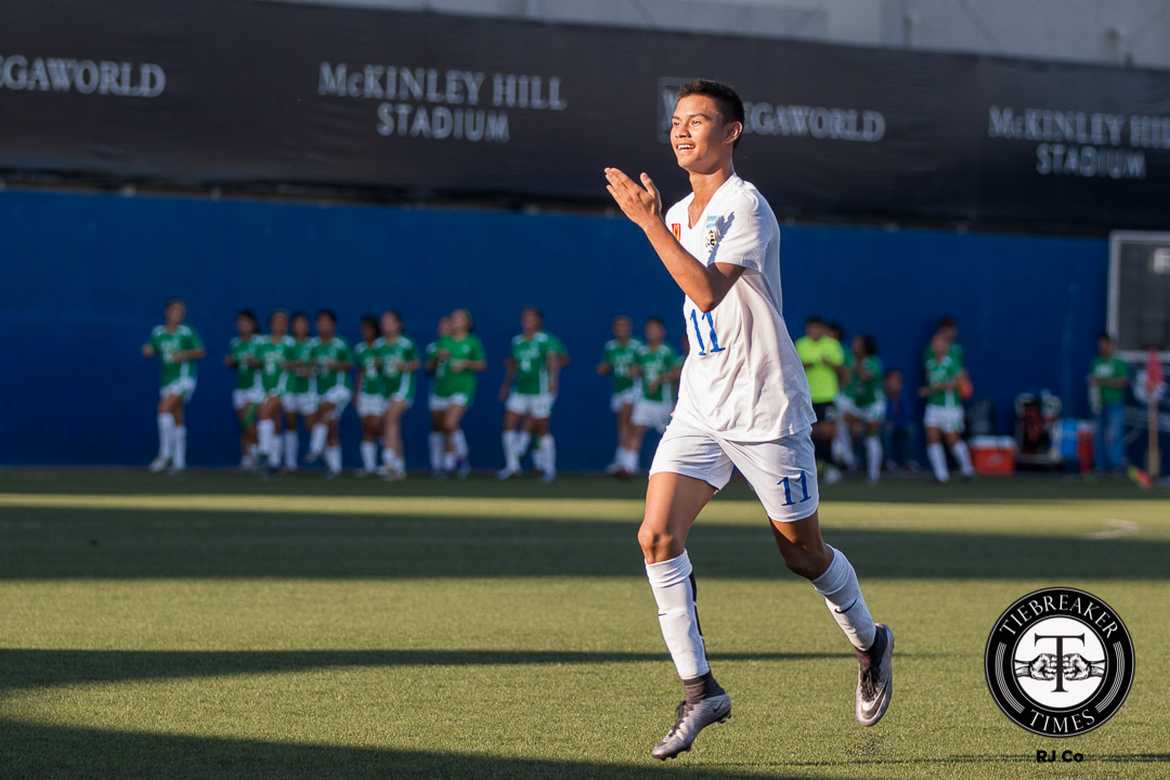 A Jekyll-and-Hyde season entails some very miserable lows – and incredible highs. The Ateneo de Manila University Blue Eagles have had that sort of year. In this UAAP Season 78 Men’s Football Tournament, Ateneo have had big wins against the National University and University of Santo Tomas, yet suffered losses at the hands of De La Salle University and Far Eastern University.

Oh, that 2-5 loss to Far Eastern University in the first round. That had been a downer for the Blue Eagles and it foretold a possible struggle this season. Nevertheless, Ateneo’s inconsistent nature has allowed them a shot at the Final Four, and with Adamson University holding UST to a draw, a result against FEU today (April 10, 2016) at the McKinley Hill Stadium in Taguig was imperative for the Blue Eagles.

The Blue Eagles did just that. At the end of ninety minutes, Ateneo had managed to find a way to sneak past FEU courtesy of Jarvey Ocampo Gayoso’s 81st minute goal. It wasn’t a lucky win, as the Blue Eagles had arguably played their best Football this season. FEU, though, had been made to pay for their poor start to the match.

Ateneo were simply fantastic in the first half. Though FEU’s Val Jurao had an early attempt at goal, it was very much the Blue Eagles who had been in control. For some reason, the Tamaraws allowed the Blue Eagles the space they needed to play their forwards through. Blue Eagle forwards Ocampo Gayoso, Emilio Acosta, and Christian Castillo latched on to passes delivered by Mashu Yoshioka and Carlo Liay throughout the period.

Case in point: Liay delivered a fantastic pass towards Gayoso, who was unmarked at the far post. In turn the latter released a shot which was deflected out by FEU center-back Audie Menzi. Ateneo then successfully countered FEU’s attack and penetrated the Tamaraws’ box, yet Acosta failed to muster his shot well. Gayoso also proved his capability to press opponents when he intercepted the ball off Joshua Mulero, but FEU goalie Ray Joyel rushed out to clear the danger.

It was very much Ateneo in that period. Even the water break at the twenty-fifth minute did not halt the Blue Eagles’ momentum.  Blue Eagles’ right-back Jose Lipardo provided a good ball into the box that was headed over by Gayoso. Perhaps the best chance for Ateneo fell to Acosta; from a counterattack, Gayoso cut inside and played Acosta through, only for the latter to let his nerves get to him and squander it. Royel then had to work when he thwarted Gayoso and caught Jeremiah Rocha’s header.

That’s not to say, though, that FEU failed to threaten Ateneo, but the Tamaraws lacked the potency they’d had in their previous games. Jurao and Andes both failed to hit the target, and Dave Deloso shot over when he found pace in the Ateneo box. Jurao then unlocked the Blue Eagles’ defense with his runs inside the box; his first shot was towards the far post, but Ateneo goalie Kenneth James was untested yet again. The second, though, was when Jurao only had James to beat, but Rocha performed a last-ditch tackle to clear the danger.

Liay had a run through midfield and a wide shot before halftime, which was symbolic of how Ateneo played, full of endeavor, yet no cigar. Both teams reached an impasse at half time, which left themin frustration. After the break, however, FEU brought on midfielder Paolo Bugas to try and shore things up at the middle of the park.

However, it was Ateneo, again, who started well in the second half. From a free kick, the ball was laid off to Castillo, who forced a fine save from Joyel. The game, though, became an even contest. In addition to that, the Tamaraws regained their usual rhythm with Bugas on the pitch. True enough, only a good catch by James prevented Bugas from scoring the opening goal.

With momentum at their side, the Tamaraws forced Blue Eagles left-back Kendall Colet into conceding a free kick. Luckily for the Blue Eagles, their wall held firm and the danger was cleared. FEU pegged Ateneo back nearly halfway through the period. Only counterattacks made do for the Blue Eagles and one such move allowed the Blue Eagles to win a free kick. Gayoso took it, but he failed to threaten Joyel. It was then an even match, with both teams hitting each other on the break.

In the 81st minute, though, came the goal Ateneo deserved. A high ball approached Joyel. It should have posed no danger, but Joyel misjudged the ball’s movement and allowed a lurking Gayoso to tap the ball in to give the Blue Eagles the lead. FEU had some half-chances before full-time, yet none really forced James to make a save. In the end, Ateneo held on for a valuable win.

The result leaves Ateneo at 4th place with 21 points. Meanwhile, FEU still maintain their hold of first place with 24 points.