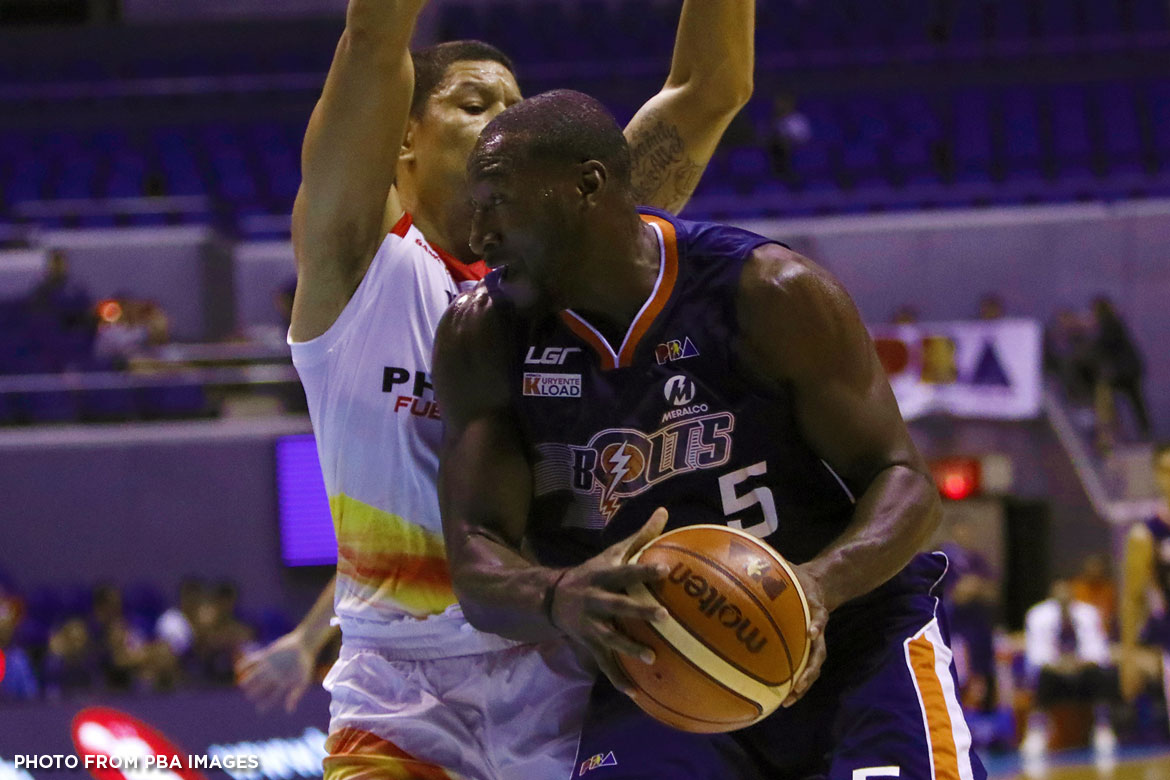 Allen Durham was the spark the Meralco Bolts needed in the final frame, as they stormed back to upend a revamped Phoenix Fuel Masters, 107-104, in the 2017 Governor’s Cup, Friday night at the SMART-Araneta Coliseum.

“Just an incredible effort from my guys tonight,” lauded Meralco head coach Norman Black, whose side bounced back perfectly from their loss to the NLEX Road Warriors last Sunday and have now improved to 5-1. “Hats off to my players.”

Durham finished with 33 points, including 15 in the final frame, on 50 percent shooting alongside 16 rebounds and seven assists. Garvo Lanete made his presence felt with a career-high 27 points on top of four caroms.

The Fuel Masters were already ahead by 15, 77-62, in the third canto, but the Bolts rallied back in the payoff period through a Durham-powered 12-0 surge, to establish a nine-point cushion, 96-87, with 5:10 remaining.

Not wanting to go down, Phoenix retaliated through new faces Brandon Brown and Jeffrei Chan, as they responded with a 12-3 run — capped by the latter’s point-blank shot — to tie things up at 99 with 2:45 on the clock.

Meralco broke the lock by scoring six more points, 105-101, after Chris Newsome’s jumper with 16.6 seconds left. But then Brown was fouled while taking a triple, and he then made all three charities to lift Phoenix by one, 105-104.

That, however, was the last hurrah Phoenix would have, as Lanete went a perfect 2-for-2 from the line to widen the gap once more, 107-104, with 7.6 ticks left. Brown tried to send it to overtime, but his triple clanged off the rim.

Phoenix’s loss, which sent them to 2-4, wasted the debut of Brown and Chan. The American reinforcement had 38 points and nine boards, while the nine-year veteran made 27. Both players had already combined for 37 points in the first half alone.

The Bolts shot 46 percent from the field, far from the notable 53 percent clip by Phoenix. However, Meralco had more rebounds, 44-38, and their defense forced the Fuel Masters to 22 turnovers, which they converted to 24 points.

Meralco will now enter an 18-day break before facing the TNT Katropa on September 6, Wednesday, 4:15 PM still at the Big Dome. Phoenix, meanwhile, will try to bounce back versus the Star Hotshots on August 23, Wednesday, 7:00 PM, at the Mall of Asia Arena.