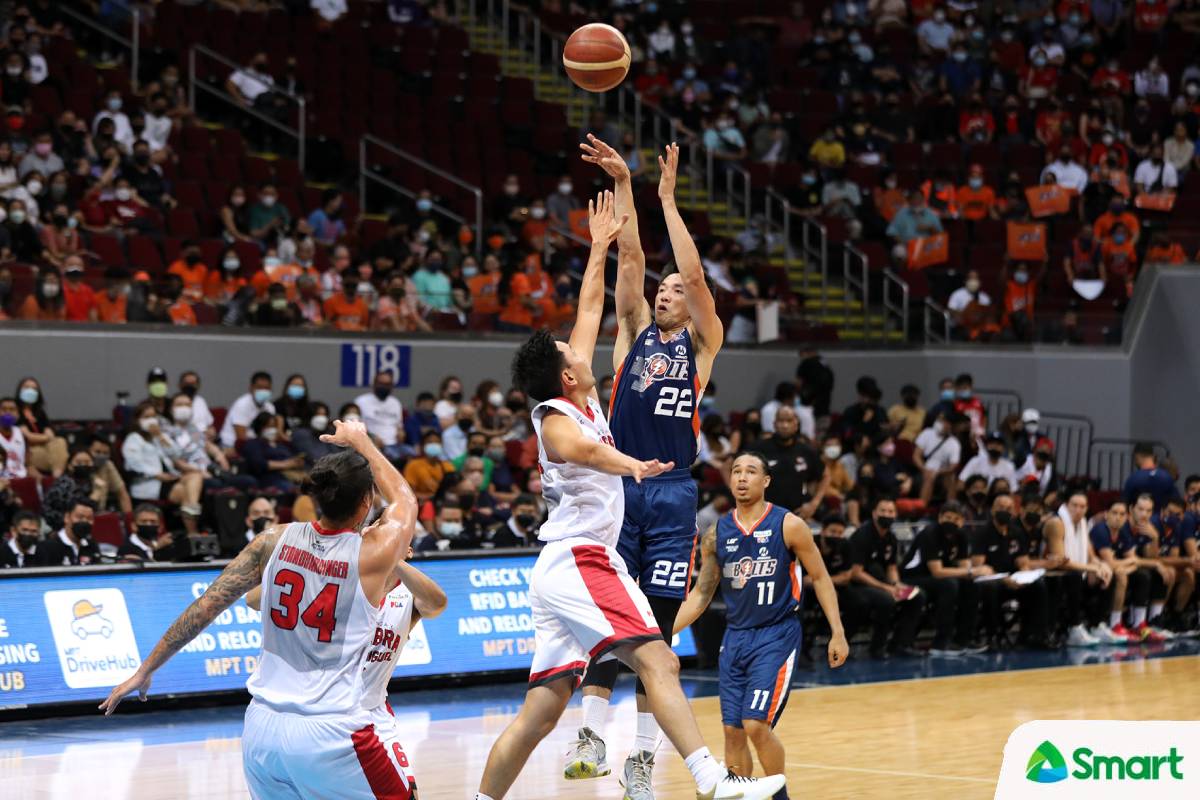 Allein Maliksi admitted that it was a ‘hard pill to swallow’ being a non-factor for Meralco in Game Two of the 2021-22 PBA Governors’ Cup Finals, Friday night.

The veteran gunner didn’t hide his disappointment over the fact that he laid a big fat egg in the Bolts’ 93-99 defeat that foiled their bid to go up 2-0.

He couldn’t really be put at fault for that, since he was coming off a fiery showing in the series opener last Wednesday. There, Malilksi fired 22 points on a 50-percent clip to power his side to the 104-91 victory over Barangay Ginebra.

Two nights later, the 34-year-old would go 0-for-7 from the floor, eventually tallying zero points for the first time since the 2020 Philippine Cup semis against, coincidentally, the Kings, the eventual champs of the bubble wars.

“Definitely, it is a hard pill to swallow,” he lamented after the match at the SM Mall of Asia Arena.

“Kasi it is a scoreless game, and it is the Finals. And for me, I’m not putting my team on my shoulders naman, pero I need to contribute.”

Maliksi felt that his struggles began when he garnered two fouls in the first quarter alone, first against Justin Brownlee barely two minutes into the match and then an offensive foul with a little over five minutes left.

It also didn’t help that Ginebra mapped out schemes against the four-time champion that prevented him from getting good looks.

“We weren’t able to get him good looks tonight,” said Meralco head coach Norman Black. “I thought a lot of his shots were forced. Guys in his face.

“In addition to that, they went big, so it became a little bit more difficult because of the matchups on the other end of the court.

“A lot of times, he was stuck with Scottie Thompson, and for us, that’s not a great match-up for Allein. We’d rather see him with Jeff Chan, or some of the other guys out there,” the champion bench tactician added.

Fortunately for the Bolts, the other guards stepped up, led by Aaron Black. The young guard scored a career-high 24 points, as he sparked their rally from 20 down before ultimately bowing to Brownlee and the Barangay.

Now, it will be about deciphering the defensive plots thrown in Maliksi’s way as the Bolts are keen to help him return to his old ways on Sunday.

“So I need to focus my thoughts on the next game, how to bounce back, how to figure out what they’re doing to me.”

“We’ll figure it out, we’ll get him going again,” said Black, on the other hand. “We got that same problem against Magnolia and we figured it out.

“We’ll figure it out against Ginebra, too,” he added. “We’ll find out what type of defense they’re using against him.”