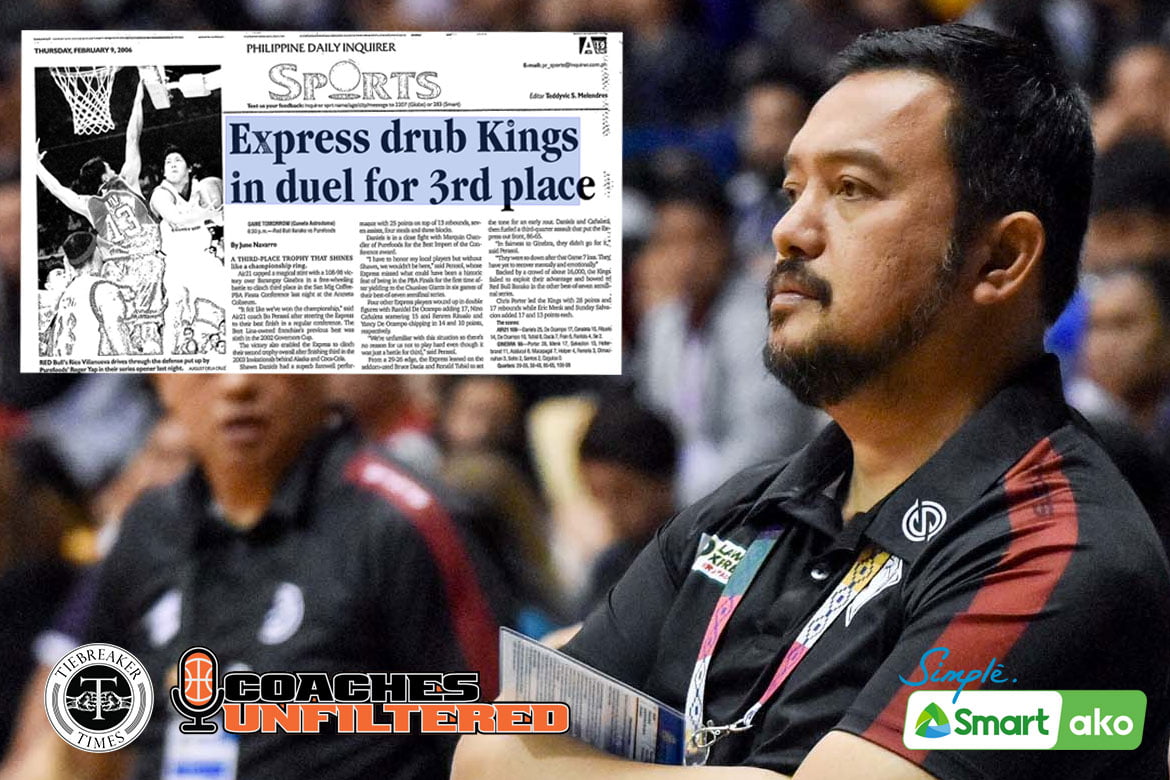 Though he had been to the PBA Finals twice, Bo Perasol’s most significant experience during his stay in the pro league was not the times he competed for the championship.

Speaking in Tiebreaker Vodcasts’ Coaches Unfiltered presented by SMART, the current UP coach said that it was Air21’s third-place finish in the 2005-06 Fiesta Conference that he holds dear in his heart.

“That established my position as a coach,” Perasol told the podcast also supported by Mighty Sports and Choi Garden.

Perasol was only 34 when he was tapped to be the Express’ head coach prior to the 2005-06 season, replacing Bong Ramos. He became the fifth mentor of the franchise, which was just entering its fourth season then.

He took over a team that featured future Hall-of-Famers such as Ranidel and Yancy De Ocampo, a rookie KG Cañaleta, Ronald Tubid, and Gary David, and also had John Ferriols, Wynne Arboleda, and Egay Billones.

“I had a strong team,” recalled the former MBA head coach, who served as assistant to Ramos before he got appointed.

“I had Ranidel, I had Ronald Tubid, I had KG Canaleta. Solid pa ‘yung team na ‘yun eh. I had Yancy as my big man, and John Ferriols, solid pa siya. Andun na si Gary at that time, and Wynne Arboleda and Egay.”

Expectations were low for that team, though, as it was still young. But that squad, which had the burly Shawn Daniels as its reinforcement, became the surprise team of the tournament.

The Express finished the classification round in fifth with a 9-7 record. It then pulled off a stunning upset against defending champions San Miguel Beermen in the best-of-three wildcard phase, 2-1.

Air21 carried over that momentum in the quarterfinals, where it wielded the upset ax anew against favorites Talk N Text Phone Pals — which had former NBA cager Darvin Ham as import — in five grueling games.

That impressive run then came to a halt when the Lina Group-owned squad crossed paths with Purefoods in the semis. The Express bowed to the James Yap-led Chunkee Giants in six.

Still, that didn’t stop the Express from achieving the best they could. They defeated a Barangay Ginebra squadcoming off a heartbreaking seven-game semis defeat to eventual champs Red Bull to win third place.

That feat was memorable as it was just the franchise’s second semis trip since the 2003 Invitational Cup. Personally, for Perasol, it helped him prove that he has what it takes to lead the squad.

“You have to establish yourself as a coach who can get the wins for the franchise also. Sa PBA, wala naman ‘tong pakiusapan ‘pag natatalo ka eh, ‘di ba? Matatanggal ka talaga,” he said.

Perasol would go on to stay with Air21 in the next three seasons, where he steered the team to the 2008 Fiesta Conference Finals before bowing to the Gin Kings in seven games, before resigning in 2009.

He then joined Coca-Cola, first as an assistant to all-time great Kenneth Duremdes. He was elevated to head coach in November 2009 as the latter filed for candidacy for a position in his province.

READ  There's nowhere to go but up for Fighting Maroons

Coca-Cola soon carried the Powerade banner, and Perasol then made it one of the most memorable teams in the PBA when he led the Tigers to a magical run to the 2010-11 Philippine Cup Finals.

Led by David, who had turned into a full-fledged star at that point, the eighth-seeded Powerade overcame the B-Meg Llamados in the quarters. It conquered Rain or Shine in the semis, before bowing to Talk N Text in the title bout.

Both of those Finals trips may not have ended up in the best of ways, but they remain historic. And Perasol, who’s now handling one of the top college basketball programs in the country, will cherish the experiences.

Still, nothing means more to Perasol than that third-place finish he had with the now-defunct franchise.

“Although I had two championship series, one against Talk N Text against coach Chot [Reyes], we lost that series; and we lost the series against Ginebra also with Air21 that was a seven-game series, I think for me the most meaningful one was the third-place finish of Air21. That was the first year I coached them,” said Perasol, now 54.

“That was one of my favorites in my stint.”