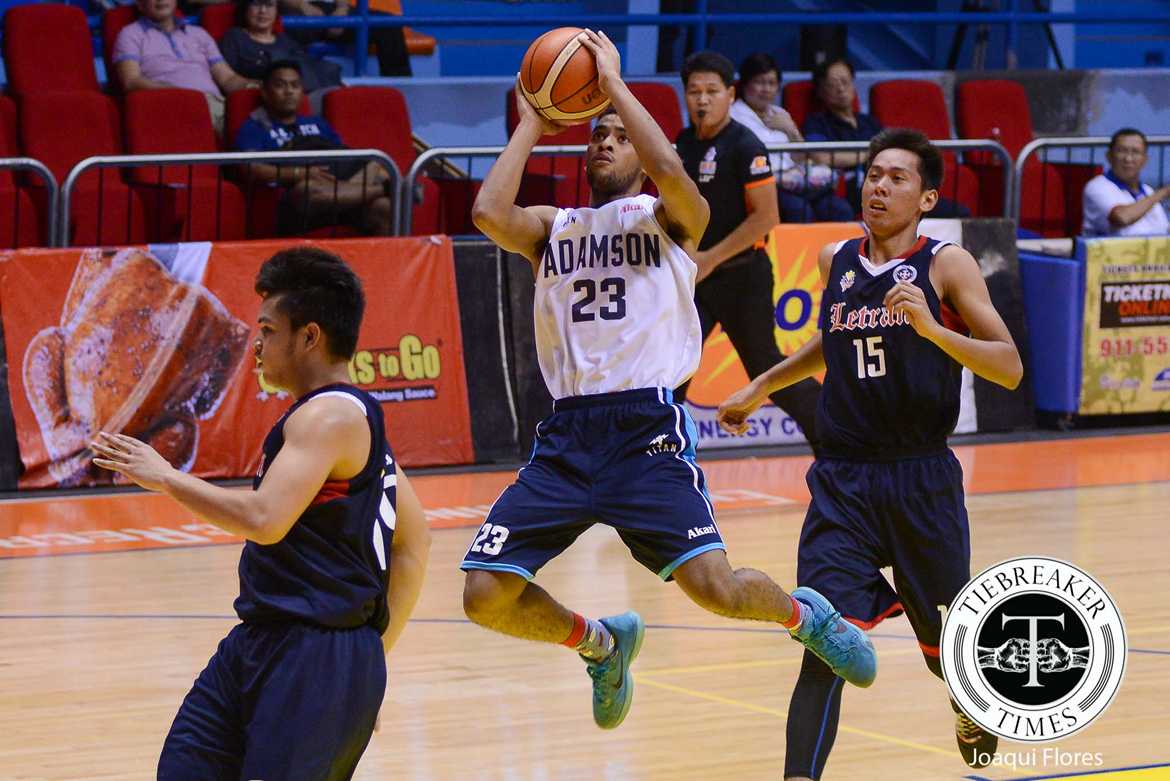 The younger brother of PBA champion Maverick Ahanmisi knocked down five triples in the game and went 10 for 11 from the field to lead the Soaring Falcons with 26 markers. He also filled up the stat sheet in grabbing five boards, dropping three dimes, stole the ball twice, and added a block for good measure.

“That’s why he is here with me,” Adamson head coach Franz Pumaren gushed about his rookie. “I guess I should thank the other schools for not giving him a second look.”

“They were saying that he is just promising but I saw a lot in him. With Renren in my coaching staff, I believe he can be the second coming of Renren,” Pumaren added as Ahanmisi is slowly developing shooting under Ritualo.

After going down 17-19 in the opening salvo as McJour Luib and Rey Nambatac paced the Knights, Ahanmisi led the Falcons rally in scoring 17 first half points in the second quarter as he knocked down four threes. Moreover, fell rookie Robbie Manalang found his open teammates in dishing out five of his seven assists in the opening half to give his team a 47-41 halftime lead.

Ahanmisi continued to six more point in the third frame while Papi Sarr powered his way in the paint to give Adamson the biggest lead of the game 69-58 entering the final quarter.

The Knights though, displaying their championship experience, were able to cut the lead to just four, 77-73, with 3:43 remaining in the game after a three-point play by JP Calvo and a basket by Nambatac. However, a triple by Manalang halted the Lertan rally while stops by Sarr and misses by Luib and Nambatac spelled the doom for the Knights.

“Even though we made some mental mistakes we were able to recover,” Pumaren said. “If you noticed when Letran was making a run I did not call a timeout. That’s one way of trying to prepare them for games like this and to rise above the challenge.”

Nambatac led the Knights in notching a double-double with 18 points and 11 rebounds. However, he was just 8 for 19 from the field. JP Calvo and Jerrick Balanza scored 15 points each in the loss.

As a team, Adamson shot 46 percent from the field compared to just 41 percent for the struggling Knights. Moreover, the Soaring Falcons knocked down ten triples in the game that proved to be the difference in the game.

The Adamson Soaring Falcons (B, 2-2) will next face the Mapua Cardinals on Saturday, May 21 at 1:30pm. On the other hand, the Letran Knights (B, 1-2) look to snap out of their funk on the same day as they face the UE Red Warriors at 3:15pm.