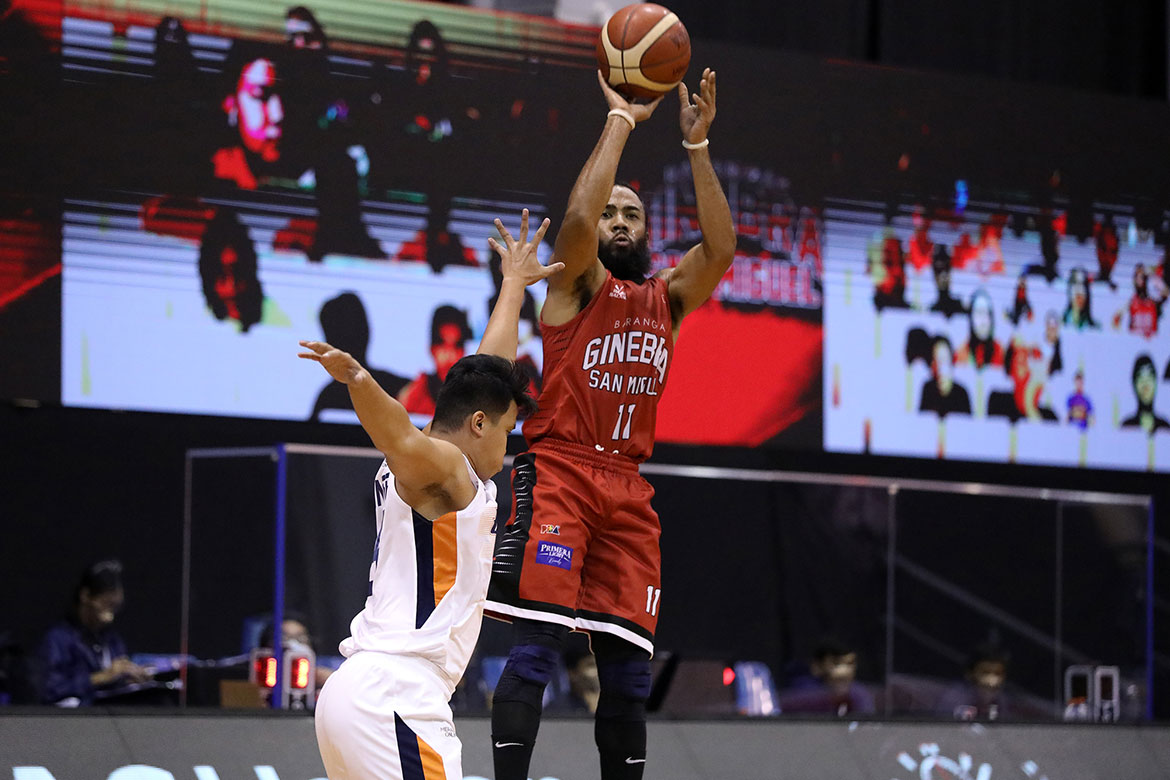 Japeth Aguilar is nearing his top form as he led Barangay Ginebra zoom past Meralco, 105-91, in the 2020 PBA Philippine Cup Sunday night at the Angeles University Foundation Sports and Cultural Center in Pampanga.

The 6-foot-9 forward finished with 20 points on 8-of-11 shooting as the Gin Kings collected their third win in as many games in the bubble, creating a three-way tie with TNT and Rain or Shine on top of the standings.

Aguilar remained on the floor even if the game was out of reach in the final frame as Coach Tim Cone wanted to help him regain his old form faster, given the time constraints of the bubble tournament.

“I let Japeth out there the whole time just to get him in shape. He kept wanting to come out, no you’re staying in there, you’re staying in there. We really don’t have time to get in shape by working out because the games come so fast so Japeth has to kind of play himself into shape, the same thing for LA. The only way he is going to play himself into shape is if he plays the minutes,” he said.

The Barangay also received solid performances from Stanley Pringle, Jeff Chan, and rookie Arvin Tolentino as they continued their mastery of the Bolts, whom they had faced in three of the last four Governors’ Cup Finals.

Pringle finished with 16 points, including seven in the second quarter where the Gin Kings erupted for 31 points to turn a 20-all deadlock at the start of the frame to a 51-39 lead at the half to set up the one-sided affair.

Chan produced 12 points on 5-of-6 shooting from the field alongside four assists, two rebounds, and two assists, while Tolentino had the best game of his young career so far with 11 markers and four boards — as a starter.

Tolentino even converted a four-point play in the third chapter that gave a 65-50 lead for the Gin Kings, who led by as many as 24 points, 92-68, following a lay-up by Chan with 5:37 left in the game.

But what Cone was really proud of with the victory was his ward’s effort on defense. “I just thought it was a really great defensive effort tonight,” said the league’s most accomplished mentor.

“We weren’t getting a lot of breakdowns. We were forcing a lot of tough shots, getting rebounds and we were creating a lot of offense on our defense. I thought that was the best part for me,” added Cone.

Another highlight of the win was the history made by Ginebra great Mark Caguioa. His entry at the 6:35-mark of the fourth formally marked his 18th season, becoming the league’s longest-tenured player in a single franchise.

Caguioa, the 2012 Most Valuable Player with eight championships under his belt, surpassed the 17 seasons spent by all-time great Alvin Patrimonio with Purefoods and by Harvey Carey with TNT.

“I don’t think I’ve been around a player that I’ve had so much joy in being around. Mark is just a joy to be around,” said Cone. “Just having him around is an awesome thing. We just enjoy Mark being here and being part of the team.”

Ginebra will shoot for its fourth straight win versus Phoenix Super LPG on Wednesday, Oct. 21, at 6:45 p.m., while redemption is what Meralco eyes when it takes on Magnolia on Tuesday, Oct. 20, at 4:00 p.m.