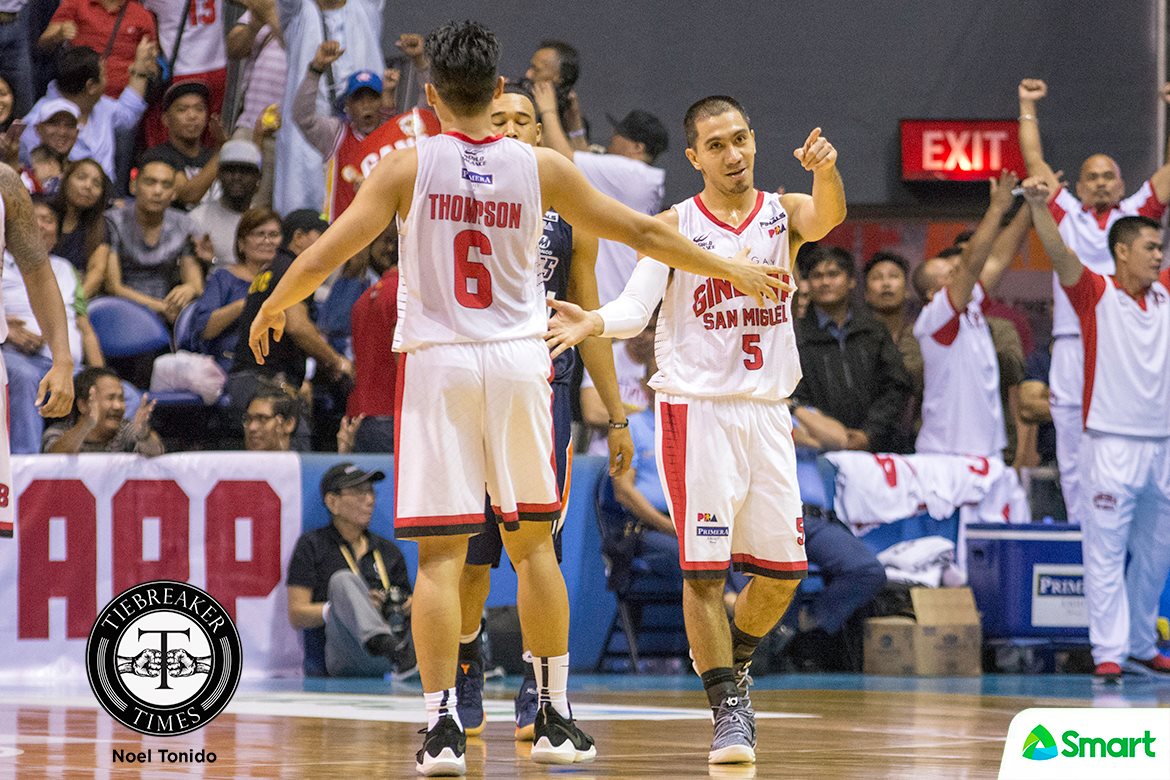 The cold-blooded shot capped off the Barangay’s fightback from 18 down in the second quarter. It also dashed Magnolia’s hopes after they knocked within two after going down by 11 points with five minutes left to play.

Tenorio finished with 14 points – 12 on the second half – along with five rebounds and five assists.

“We weren’t playing well at all. We’re a little bit gigil. We didn’t show the NSD. But we’re proud to represent the NSD and it didn’t look like at halftime we won’t be able to live up to that but somehow we did it,” said head coach Tim Cone.

Justin Brownlee took the offensive load for the Gin Kings, as he produced a career-high-tying 46 points on 14-of-25 shooting from the field – 16-of-21 from the stripe – along with 19 rebounds and five dimes.

The Barangay looked headed for the exit when Mark Barroca and the Hotshots waxed hot late in the second frame and posted a game-high 18-point lead, 56-38, with 1:08 remaining prior to the break.

But Ginebra came back in the third canto with guns ablaze. After allowing their counterparts to unload 32 points in the previous quarter, they poured in a whopping 37 points to take a 79-78 lead with about three ticks left.

That gave them enough momentum to work with come the final frame. A Tenorio freebie off a Chito Victolero technical foul for tossing the ball – which got him ejected – lifted Ginebra to a 100-89 lead with 5:08 to go.

Magnolia still tried to work their way out after their head coach’s ejection and from the huge deficit, unfurling a 14-1 rally – capped by a Romeo Travis contact lay-up – to regain the lead, 103-101, with 53.1 seconds remaining.

The breaks then went the Gin Kings’ way afterwards. Scottie Thompson’s tip-in tied the game up with 40 ticks left, and the Hotshots committed a costly error on the other end as Paul Lee’s pass sailed outside.

Tenorio’s floater happened moments later, and Lee once again made another blunder as his long triple missed and wasn’t secured by his teammates. Tenorio applied the finishing touches with his charities.

“We’re happy to be alive and kicking. But that’s not what we’re here for. We’re here to win the series,” added the decorated bench strategist on the victory. “I just hope our guys understand that. We gotta keep moving forward.”

Thompson had 15 points, seven rebounds, and five assists in the victory, which served as a fitting welcome for Joe Devance, who played his first game this conference after sitting out for months due to a fractured foot.

Barroca paced the Hotshots with 19 points – 12 in the second frame – and five assists. Lee finished with 17 points in 6-of-17 shooting from the field, while Ian Sangalang had a double-double of 16 points and 11 rebounds.

Travis had a career-low outing of 12 points as he only shot 5-of-17 from the field, and only had two shots from the foul line. He still had 10 boards, three assists, and a steal in the 39 minutes nd 17 seconds he played.

The Barangay will look to tie the best-of-five series at two games apiece come Game Four on Friday, November 16, at the Ynares Center in Antipolo.

‘Amin ‘To’: Paul Desiderio’s sacrifice was worth it

Bo Perasol on cloud nine: ‘The asterisk says it all’