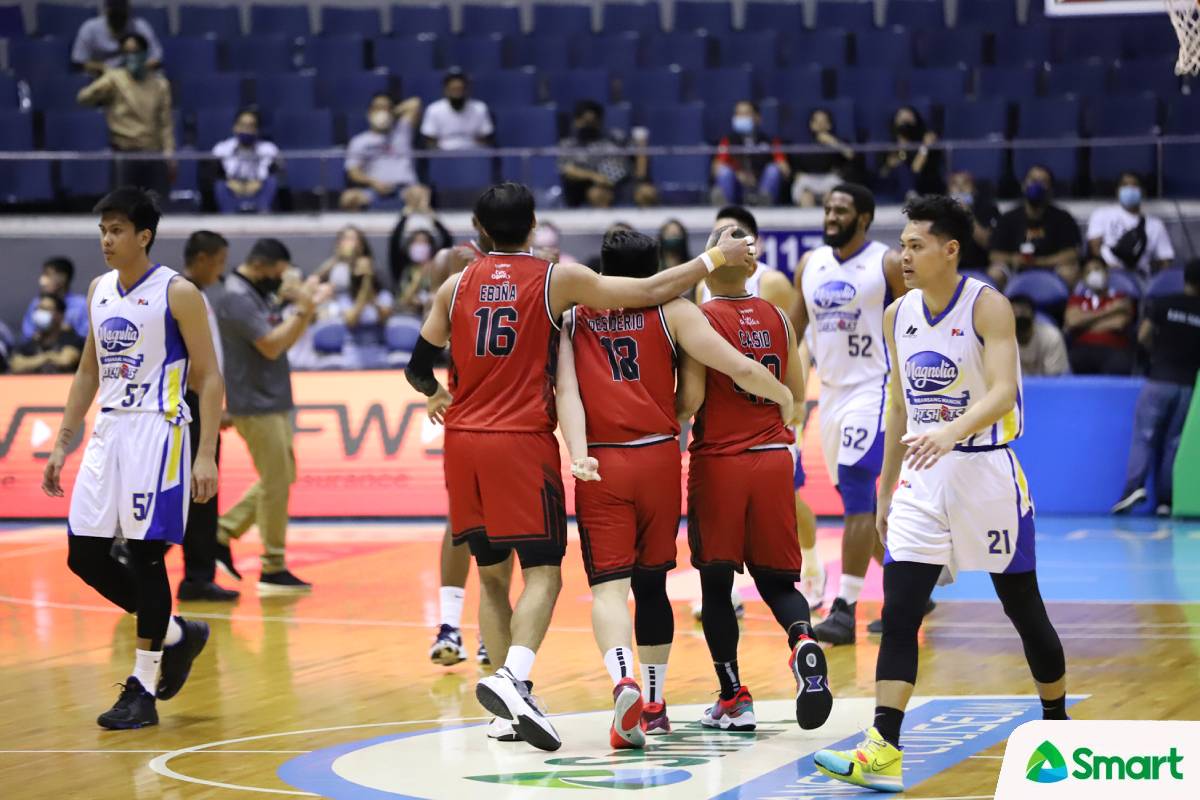 Blackwater finally put an end to its long misery with a shocking 101-100 victory over the top-seeded Magnolia in a fitting conclusion of its 2021-22 PBA Governors’ Cup campaign, Wednesday evening at the SMART Araneta Coliseum.

Barkley Ebona drained the go-ahead lay-up off a Mark Barroca turnover with 10.5 seconds remaining, while Rey Suerte made the game-preserving block on Jackson Corpuz as time expired as the Bossing laid their 29-game losing skid to rest.

The Dioceldo Sy-owned ball club won for the first time since their 98-88 win over NLEX last October 17, 2020 in the Philippine Cup bubble in Clark.

“Now, the monkey’s off our backs,” said head coach Ariel Vanguardia, who took over the team from Nash Racela last September, inheriting a team that had lost 19 games that eclipsed the record 18 of Great Taste/Presto in 1980.

Heroes were aplenty in the hard-earned victory, with Shawn Glover, Paul Desiderio, and JVee Casio also delivering on both ends.

Desiderio helped out in defending Barroca at the backcourt. The latter lost the ball and Casio was there to pick it up, and immediately dished it to Ebona for the tough bucket for the one-point lead with 10.5 seconds to go.

The Hotshots still had enough time to take the game and deal their foes yet another heartbreaker, but Suerte was there to deny Corpuz’s lay-up. The buzzer sounded and the Bossing went on to erupt in celebration.

That steely resolve saved the team from being blanked for another conference. They actually led by 11 twice in the fourth quarter before Barroca scored 12 of his career-high 27 points to lead his side’s retaliation.

Barroca was also responsible for giving the Hotshots the 100-99 lead with 48.2 seconds remaining, a shot he made over Glover.

“God is good,” expressed Vanguardia, also the team’s alternate governor. “Despite the struggle, we still have one game to still be better than the previous conference. Very lucky kami na nabigyan kami ng pagkakataon.”

Glover finished with 33 points, nine rebounds, and seven assists. Suerte finished with 16 points, while rookie Andre Paras registered a career-high 12 markers on an impressive 6-of-7 clip. Casio also had 12.

Meanwhile, Mike Harris provided 21 points and 17 rebounds for Magnolia in the loss, which actually has no bearing at all for the team as it is still headed into the quarterfinals next week as the no. 1 team with a 9-2 record.

The 2018 Governors’ Cup Best Import, though, was not able to finish the game properly after being assessed with a flagrant foul penalty 1 with 2:50 to go as he tried to stop Ebona from scoring near the rim.

Aris Dionisio had 14 points, including the four-point play with 2:13 left that sliced the deficit to just 99-96. Paul Lee added 12 for the Hotshots.