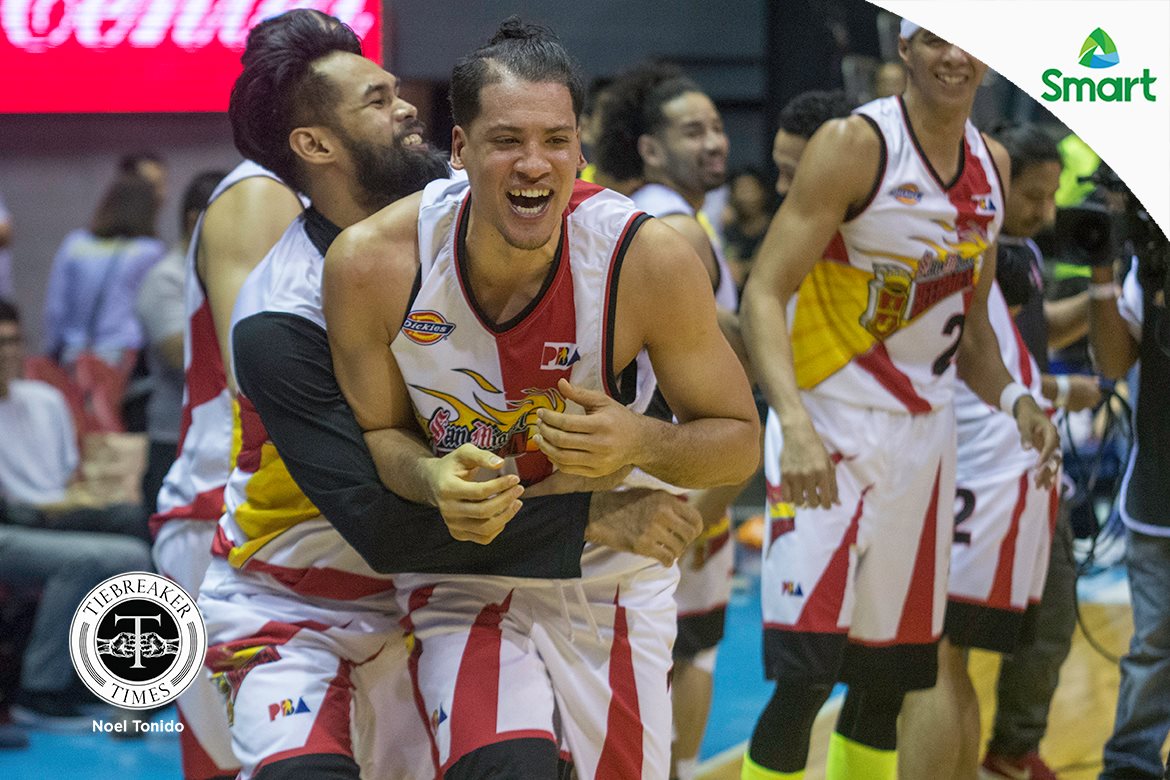 Marcio Lassiter fired a booming stepback triple with less than two seconds left to lift the San Miguel Beermen past the Star Hotshots, 111-110, to take a 2-1 lead in their semis affair, Wednesday night at the SMART-Araneta Coliseum.

The Fil-American sniper’s game-winning trey was his second triple in the bout, and he finished with 12 points in the victory. Charles Rhodes served as the Beermen’s scoring leader with 36 points and seven rebounds.

“Well, ang masasabi ko, talagang swerte kami, but ang swerte talagang pumupunta kapag magaling ang player eh, especially si Marcio,” lauded a relieved SMB head coach Leo Austria of Lassiter’s clutch shot. “He wants to win eh, and he has an open lane and they are in penalty. But he likes that shot, the three points a la Steph Curry.”

The Beermen were up four, 108-104, with less than two minutes left to play, but Ricardo Ratliffe powered Star with six straight points ended by a turnaround hook shot to lift the Hotshots up, 110-108, with 13.6 ticks to go.

As SMB regained possession, Chris Ross tried to knot the game once more, but his teardrop shot missed its target. Luckily for him, Lassiter was able to grab the offensive carom, and that proved to be the doom of Star.

Lassiter then spoiled the Hotshots’ hopes of completing the comeback, drilling a contested step-back triple from the left wing that kissed the glass to put San Miguel on top, 111-108, with just 1.3 seconds left.

The Hotshots did not have any timeouts left, leaving them with no choice but to inbound the ball from the baseline. Rafi Reavis caught the leather and launched a Hail Mary, but his shot missed and sealed SMB the win.

Ross had a stellar outing for the Beermen with 27 points on 48 percent shooting alongside eight rebounds and eight dimes. June Mar Fajardo finished with 18 markers, eight caroms, and two blocks.

The loss puts in vain another excellent performance from Ratliffe, who scored 44 points, hauled down 19 rebounds, dished seven assists, and swatted shots four times. Paul Lee backed him up with 21 markers on 15 shots.

The Beermen were out-rebounded by Star, 57-37. But their defense hounded the Hotshots, as they forced the latter to 24 errors that were turned to 21 points.

San Miguel will look to close out the series in Game Four on Friday, June 16, 7:00 PM at the Mall of Asia Arena.