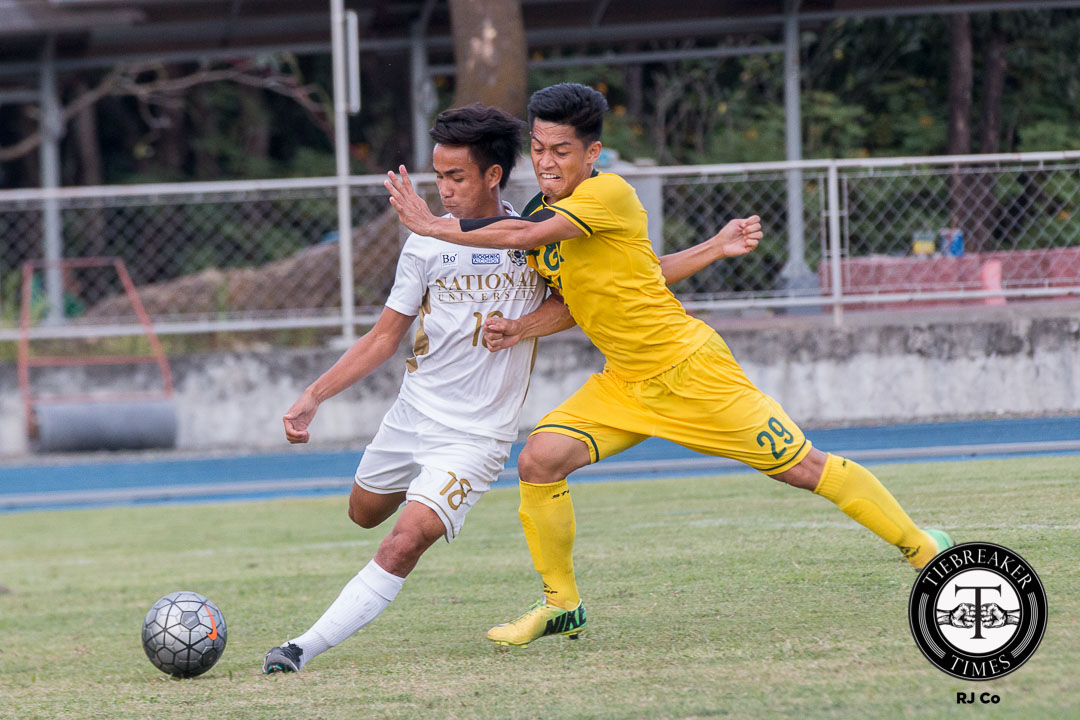 In a match where both teams tasted the lead, NU and FEU concluded their duel with the score of 2-2 Thursday afternoon at the Moro Lorenzo Football Field. The result favors the Bulldogs more than Tamaraws, as they overcame a deficit with one less player on the field in order to sustain their positive start to the season.

The game promised plenty of goals, with last season’s matches producing a total of ten. It looked to be more of the same when NU grabbed the lead five minutes in courtesy of rookie Chima Uzoka. It came from a retake of a Paolo Salenga free kick which was saved by RJ Joyel. Unfortunately for the keeper, the young NU midfielder reacted fastest, nodding the ball into an empty net.

The game’s tempo upped as the Tamaraws hungrily moved for an equalizer. They nearly scored when Eric Ben Giganto was left open in the box at the 15th minute. His effort was caught easily by NU keeper Elijah Aban. FEU built momentum from that and was rewarded six minutes later. Giganto was given another clean look on goal and made sure it counted that time around. The senior forward controlled the ball well with his first touch and guided the half volley into the onion bag.

Getting back on level terms, FEU maximized on momentum in order to complete a turnaround. From a free kick at the 28th minute, Val Jurao made contact with the ball that hit the post. It was followed by a relatively quiet eight minutes of play that was broken by Tamaraw rookie Rico Andes. The winger lost his marker with a dazzling display of pace and ball control. Once he found his spot in the box, he sublimely placed the ball into the far side to make it 2-1 for FEU.

Things turned from bad to worse for NU just before halftime. Uzoka turned from hero to villain when he acquired his second booking of the day with a challenge on Paolo Bugas. It nearly cost more than just a man disadvantage for the Bulldogs had Aban not saved Audie Menzi’s long range free kick attempt.

FEU had the chance to spread the margin having a man more than NU on the field. They nearly did so when Giganto sent his shot narrowly off target at the very first minute of the second period. Seven minutes afterwards, it was NU’s turn to have a crack on goal. Patrick Valenzuela was able to shoot in front of goal but his attempt went straight to Joyel. The back and forth nature of the match was clearly reflected when Giganto launched a shot over the bar at the 56th minute. He would rue that chance when two minutes later, the score was level once more. Salenga picked up a loose ball on the attacking third. Gaining control, the NU skipper maintained composure to find the back of the net.

At 2-2, chances were lessened. Both teams seemingly opted for a more cautious approach in front of goal. Between the two squads, FEU looked more intent to break the deadlock. They produced few chances, but the NU defense resisted each attack that came their way. Their efforts to disrupt the FEU defense was a success, earning a four-goal draw.

NU Coach Wilhelm Laranas was the happier of two parties, claiming the draw as a bearable result against the defending champions. “Ayaw talaga nilang magpatalo considering down ten kami. Considering the result, masaya na ako,” he said. He added that the team had no choice but to defend in the dying minutes for them not be vulnerable against a ferocious FEU frontline.

On the other hand, FEU Program Director Vince Santos can’t help but feel disappointed with the way things ended. “I think we even played better when we were playing [against] 11 men. We weren’t able to make use of the man advantage. He also commended their opponents for playing well defensively, limiting them to less options late on. “It’s very frustrating when there’s no flow to the game. We ended up doing a lot of long balls rather than our normal combinations,” he assessed.

The result keeps the Bulldogs ahead of the pack, sharing first place with La Salle but are ahead on goal difference. The Tamaraws are also tied with another team, UST, in third place. FEU holds a better goal difference than the Tigers. NU and FEU will look hope for a better result on a Sunday when they are set to play against UST and La Salle respectively. Both games are set to be played at the McKinley Hill Stadium.