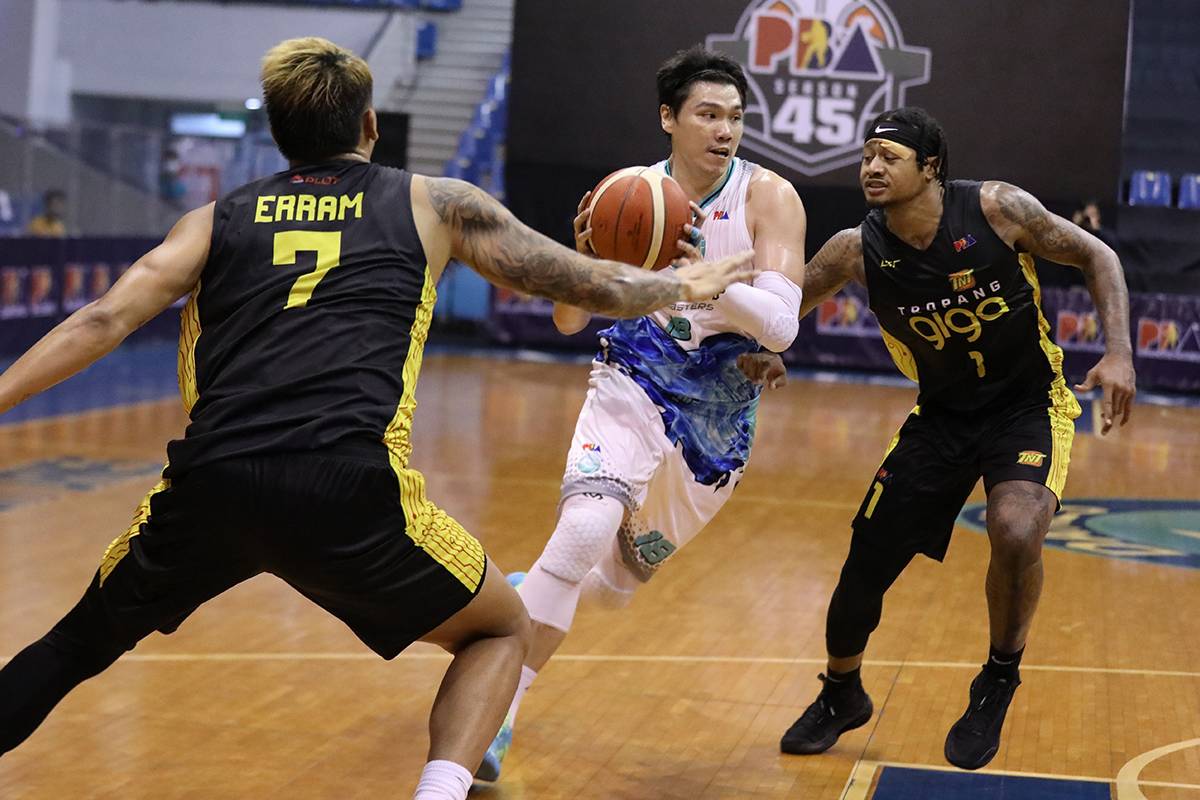 Justin Chua isn’t shy to say that he hopes to be heralded as the Most Improved Player of the 2020 PBA season, for it will serve as the cherry on top of what had been a year filled with blessings for him.

“Parang na-feel ko na 2020 wasn’t so bad after all,” the 31-year-old reflected in a recent episode of 2OT, presented by SMART.

Chua has been in the pros since 2013 and played for five teams before arriving to the Fuel Masters in 2017, where he luckily found a home. And the 2020 Philippine Cup saw him emerge as a premier big man with his solid play.

The 6-foot-6 agile big hiked his production from the previous all-Filipino conference, posting per-game norms of 11.7 points on 35-percent shooting from downtown, on top of 6.7 rebounds and 1.5 assists in 28 minutes.

But really the glaring improvement of his game was his rim protection. The Ateneo de Manila product doubled his blocks average from the previous import-less meet with league-best 1.6 swats.

“It all just happened kasi I accepted my role in the team, na I was really the big guy who had to protect the paint and help the other guys. Kasi obviously, Jason [Perkins] plays a lot of minutes and Calvin [Abueva] nu’ng dulo plays a lot of minutes also and then si Matt [Wright] so … kumbaga binibigyan ko sila ng time to rest sa defense so I’ll be there to help them.

“So, ‘yun nga, I’m going back to accepting my role sa team so I always keep telling them na, ‘Sige, kahit pumetiks kayo sa depensa, I’ll help you guys. I’ll try my best to be there for you always.’ Panned out well naman,” he added.

The Fuel Masters were aiming for the crown but they fell short after bowing to TNT in a semis clash that went the distance. But it was still a great season for them nonetheless, and Chua was definitely one of the reasons why.

For Chua, much of the credit behind this career surge of his is no less than head coach Topex Robinson, who got promoted as the Fuel Master’s chief bench tactician in the middle of their bubble campaign.

“Siyempre sobrang laking bagay kasi very simple lang si Coach Topex mag-coach eh. Bibigyan ka niya talaga ng opportunity to do what you can to help the team,” he said. “He’ll put you in a place where you’ll be effective.

“Hindi ka niya basta-basta na, bahala ka kung anong gusto mong gawin. So it benefited me na pinayagan niya ako to play outside more than inside kasi mas naging diverse ‘yung team namin since I’m the center pero I’m playing outside and the guards are the ones playing inside. So for me it was a big opportunity to expand my game also, make me more valuable in the long run.”

That kind of liberty to play outside more was also because of him and his frontcourt partner Jason Perkins being able to settle what their roles are with the team, Chua shared.

“I guess accepting both our roles made it easier for me. Kasi as soon as I accepted na siya talaga ‘yung main guy namin sa post or as a big guy, it was easier for me to adjust to my role sa team talaga,” he said.

“Kasi siyempre, ayaw ko naman mag-sapawan kami or aagawin ko ‘yung posisyon niya or whatever, ‘di ba? So, as soon as I accepted it, it was easier na. And then siya rin naman, he was always trying to give me confidence na, ‘Jus, if you have a shot, just keep taking it — it doesn’t matter to me.’ So it’s a good relationship to have,” he continued.

Chua and Perkins are actually both nominated for the MIP award, while Phoenix main guys Matthew Wright and Calvin Abueva are both in the running for the Best Player of the Conference award.

For Chua, it speaks a lot for the franchise’s future. And he hopes that they could better the two semis appearances they’ve had together.

“As you can see naman, ‘yung core nandoon na kasi apat kami ‘di ba? Tapos we all play kinda different positions. Parang nandoon na yung core ng team, and we weren’t that old pa naman so there’s years left to be together,” said Chua, whose only PBA championship is the 2014–15 Philippine Cup crown when he was still with San Miguel.

“So hopefully, we can make another run for it, makapasok na kami ng Finals because it’s getting closer and closer na eh. So hopefully, makalusot naman kami.”