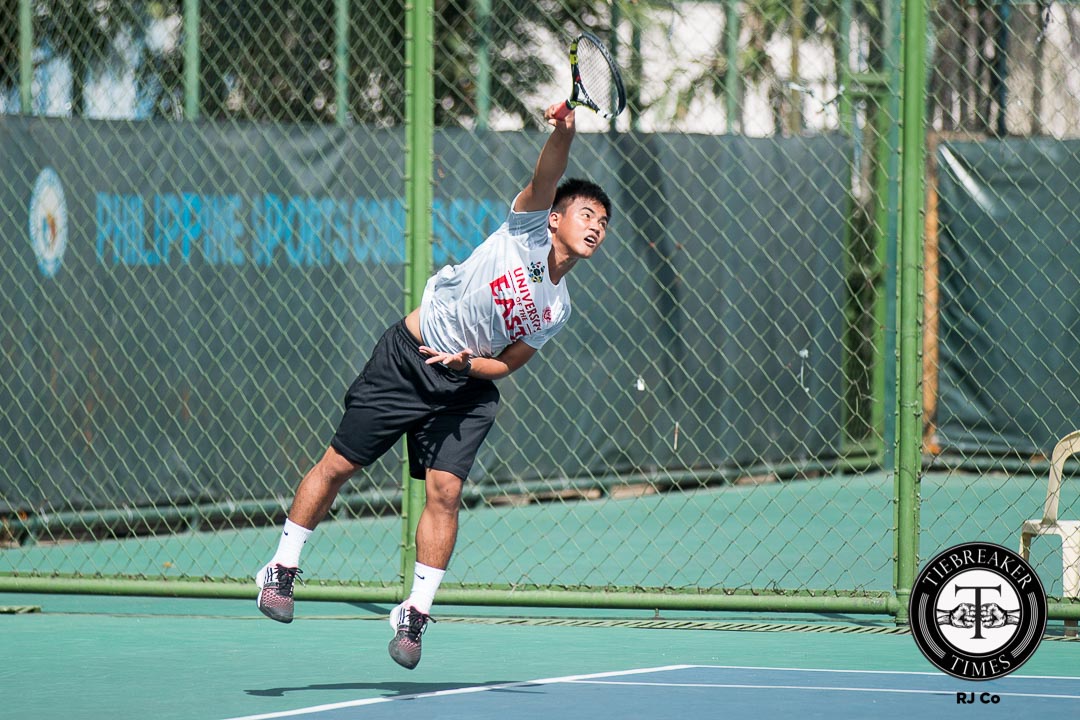 With the two sides very much aware of the implications of both a win and a loss, it was battle royale between them. Ateneo’s Iyo Canlas and UE’s Jeleardo Amazona fought toe-to-toe in the opening set until the UE veteran broke former’s serve to win it at 7-5. It was Canlas’ turn in the second set, however, as he emerged with the break advantage to take it with a similar score line. In the deciding frame, Amazona imposed his will in the set to eventually take the win, 6-3.

In the first doubles match, Luke Flores and Johann Exconde took advantage of the lull in the action due to rain to edge Rolly Saga and Rogelio Estaño Jr. in three sets. UE breezed past the opening frame at 6-1, before the Ateneans held them off in the second set tiebreak to force a deciding game. Rain suddenly poured, leading to an almost 30-minute delay in action on all courts. When play resumed, the tight battle ensued between the two pairs, with Flores and Exconde finally sealing the win at 6-4.

Ino Canlas shook off the challenge of last year’s top rookie Josshua Kinaadman in the second singles match to put Ateneo in the lead. The elder Canlas hardly broke a sweat in the opening frame, allowing Kinaadman just two service holds, 6-2. The sophomore then romped to a good run in the second, fending off a comeback attempt from Ateneo to take it after the tiebreak. The third-year Blue Netter then refocused on the task at hand and blanked Kinaadman in the decider, 6-0.

The Warriors managed to level the tie in the third singles match. Played at the other side of the Center, veteran Rodolfo Barquin used his experience to defeat Ateneo rookie Marcen Gonzales in straight sets. The UE senior took advantage of his breaks of the Gonzales’ serve and consolidated it with his own service games to take both frames. Barquin forced the deciding doubles with a 6-3 6-4 win.

UE’s Paulo Baran and Jeric Delos Santos and Ateneo’s Erj Gatdula and AJ Rivero were up to the challenge of bringing the win to their respective schools. As expected, it was a tough battle in the first set, before UE stole the set at the tiebreak with a mini-break. The Warriors then willed their way in the second set and never looked back as they managed to hold Ateneo to one game, 6-1.

With the win, UE remain a tie win behind victims Ateneo for the third spot. The Warriors will attempt to repeat the victory against the University of Santo Tomas Tiger Tennisters on Wednesday, while the Blue Netters will face the undefeated National University Bulldogs on the same day.

Ateneo need both of these scenarios to occur to force a playoff for the second Finals slot: a win from the De La Salle University Green Netters over the University of the Philippines Fighting Maroons, and their own victory against NU. Otherwise, and if UE win over UST, the Warriors and the Blue Netters will dispute the third-place trophy. The third-placers will be the ones with more number of matches won.