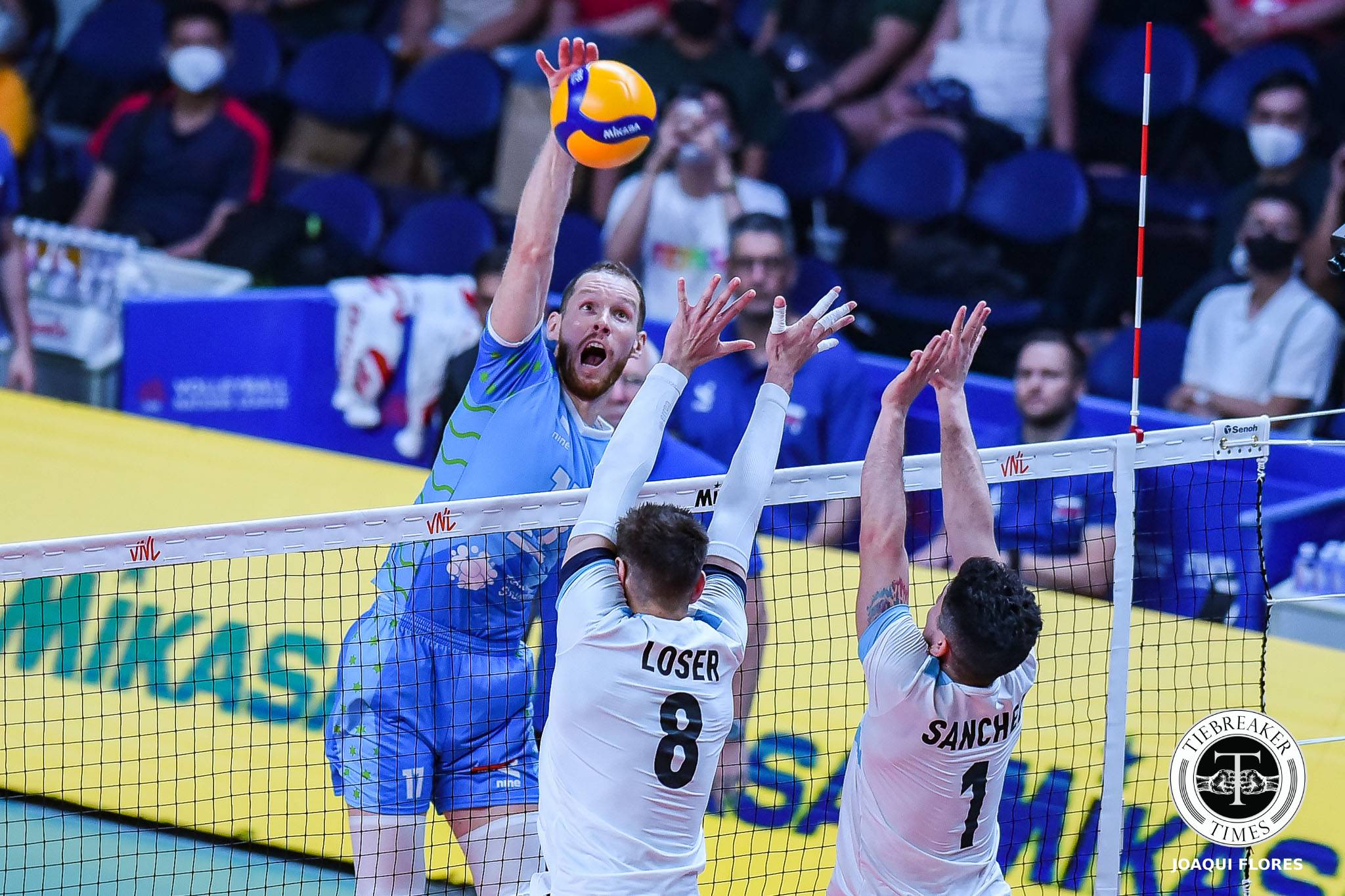 Slovenia bounced back with a huge win over Argentina in a highly-intense four-set game, 25-20, 27-29, 25-18, 25-17, to pocket its third win in the 2022 FIVB Volleyball Nations League, Thursday evening at the SMART Araneta Coliseum in Quezon City.

It was an intense battle that saw red cards given to both Argentinian libero Santiago Danani and Slovenian outside hitter Rok Mozic in the crucial third set due to a verbal altercation. The Europeans ultimately snatched one against the world no. 7 squad for a 3-3 win-loss record.

Argentina and Slovenia figured in a tight opening in the fourth set before the latter created some separation of back-to-back points from setter Gregor Ropret on a 1-2 play and a service ace. Slovenia then mounted a huge 19-13 lead, which they did not relinquish, and wrapped the win eventually, fittingly with Mozic ending the match.

Captain Tine Urnaut, who finished with a game-high 19 points on 17 attacks and two service aces, emphasized the importance of winning such a highly charged match against a powerhouse squad.

Both teams turned to their middle plays early in the first set, flaunting excellent passing and transition. Argentina, though, encountered problems on the service and eventually also on their floor defense, which Slovenia capitalized for the first-set win at 25-20.

The second set also saw Argentina and Slovenia trade points, but Slovenia’s slim lead of one or two points stood for most of the frame with service faults plaguing the South American side.

The Argentines, though, had other plans and extended the set with a huge back-row hit from Luciano Vincentin at 24-all and an off-the-block kill from Ezequiel Palacios at 25-all. After yet another service error from Agustin Loser, the 2020 Olympic bronze medalists then completed the comeback with two straight points from Palacios and then Vincentin.

Slovenia went ahead at 12-8 in the third set as Ropret steered their offense from different points of attack. The Europeans stretched the lead to five, 17-12, anchored on their net defense. This margin and momentum consequently gave them the set advantage back.

The Slovenes will take on Italy in a rematch of the 2021 CEV European Championships on June 25 at 7 p.m.

Vincentin paced the balanced attack from the Argentines with 13 points on 10 attacks, two service aces, and a block, despite needing to sit out most of the fourth set. Loser was solid as well at the middle with 12 markers on a game-high five blocks, six spikes, and a service ace.

#ReadMore  Chot Reyes not worried about 'We want Baldwin' chants

Argentina, though, coughed up 38 errors in the match that sealed their doom to their second straight loss in the pool.

Argentina, which finds itself in unfamiliar territory at 1-5, will try to arrest this four-match losing skid against China on June 14 at 3 p.m.