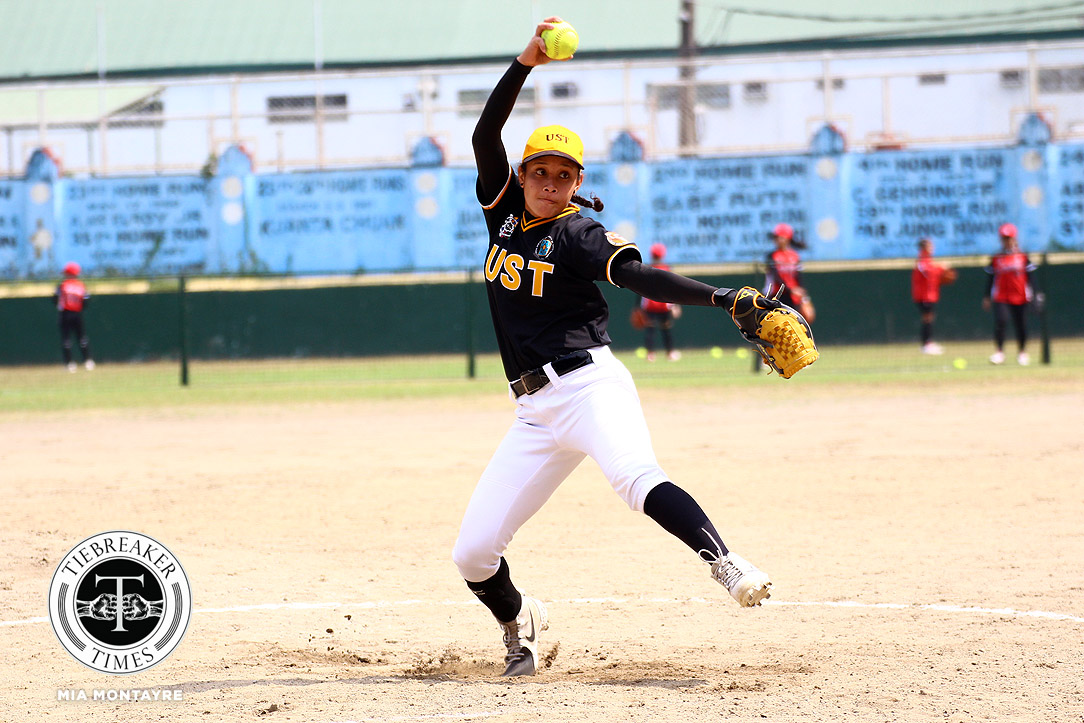 True to their mantra of getting back their losses from the first round, the University of Santo Tomas avenged their defeat against the National University.

The Softbelles of España leaned on flawless defense to upend their neighboring opponents, 3-1, to gain a share of second place before the final day of eliminations of the UAAP Season 81 Softball tournament, Saturday at the Rizal Memorial Baseball Stadium.

UST ended level with the De La Salle University at 7-4. Meanwhile, the loss puts National U in a must-win situation against the University of the Philippines on Monday.

Coming off a rousing win against the Fighting Maroons last Monday, and a dominant victory past Ateneo just two days ago, the Tigresses entered the match inspired and started the game with an initial run in the first inning.

Shortstop Marnie Dela Cruz kicked it off for the Tomasinas with a single, before Hannah Dela Torre also plucked a base hit to put on runners on the bases. With the dangerous Charlotte Sales at-bat, NU starting pitcher Mary Ann Ramos hurled in a very low ball that rolled between catcher Nicole Ordoyo’s legs, which scored Dela Cruz and advanced Dela Torre to second. Ramos then fanned two batters to retire the end.

National U got the run back in their side of the opening frame. Second baseman Elsie Dela Torre drove in a single to the center, before she was sent home by a double from her pitcher Ramos.

Big hitter Tin Palma and Trisha Tiozon then flexed their muscles in the third inning, but fortunately for the Bustillos-based opponents, they just extracted a run from their two doubles. Only Palma crossed the plate on Tiozon’s delivery, while the latter was stranded on second as Delmarie Toian’s high ball met Bulldogs’ Dela Torre’s mitts.

Nonetheless, UST were not yet done, as an insurance run came at the sixth inning after a failed attempt in the fifth. Dela Cruz got on first once more, this time off a fumbled fly to left fielder Rhea Rosales. Dela Torre then capitalized on the runner-on-base situation and slapped a double that scored Dela Cruz and put UST up at 3-1.

That turned out to be the last offensive action of the match as Celyn Ojare, the Tigresses’ rookie captain and pitcher stomped her authority and anchored her defense to the seventh win. The skipper finished with an impressive 1 ER in six innings she pitched, allowing just two hits from the NU offense.

Dela Cruz also had a great outing both on offense and defense, as she ended with a hit and two runs in four at-bats, along with three assists on putouts. Dela Torre was unstoppable at the plate, getting in three hits on four at-bats (.750 AVG) and sending a teammate home.

The winner of the La Salle-UST battle will clinch the number 2 seed and the concurrent twice-to-beat advantage, likely against the losing squad in the match. The tussle is scheduled on Monday, March 18.

At the same day, Lady Bulldogs (5-6) fight for dear life as they attempt to force a playoff for the last Final Four berth against the University of the Philippines (6-5).